Kimberly Erbrecht and Audrey Rondinelli have been making and donating nearly 120 baby hats each month to St. Clair Hospital since last October. They have seen their handiwork on the news and in the newspapers, but the grandmas were delighted to see their creations on the babies in person for the first time.

Baby owls are adorable, baby eaglets are swoon-worthy and baby frogs, ladybugs and bumblebees are absolutely darling. But when the newborns at St. Clair Hospital wear their crocheted hats that are fashioned to look like some of the fluffiest, featheriest, froggiest babies of the animal kingdom, they are the undisputed conquerors of cute.

St. Clair Hospital’s youngest patients are entering into the world in style, thanks to sisters Kimberly Erbrecht and Audrey Rondinelli from Muse, Pennsylvania, who have been making and donating nearly 120 crocheted hats per month since last October.

“I really enjoy doing it,” says Erbrecht, “They are just so sweet. One time I did Steeler hats and footballs, my sister made baby eaglet hats for the eagles in Hays, we did April showers then May flowers, we did pumpkins and candy corn for Halloween. When I start them, I don’t usually know what I will be doing for the month. Sometimes they are just regular beanie caps, but other times there’s a theme that happens.”

Pictures of the babies in the hats the sisters made for St. Clair Hospital’s Leap Day babies, which were green with large googly frog eyes, quickly gained popularity on social media and produced a lot of media attention locally and even nationally. Fox 11 Los Angeles posted a picture of the St. Clair babies online and on Facebook with the caption, “Cutest trend of 2016? Hospitals dressing Leap Day babies as frogs!” In addition to the hats, the “leaplings” also wore frog bibs, onesies and other froggy accessories donated by the nurses in the Family Birth Center.

“It was fun seeing it on TV and Facebook. Maybe the babies will make it on the Ellen show sometime,” says Erbrecht. “But really, it makes me very happy that I can do something. It’s something so small to make somebody else happy.” 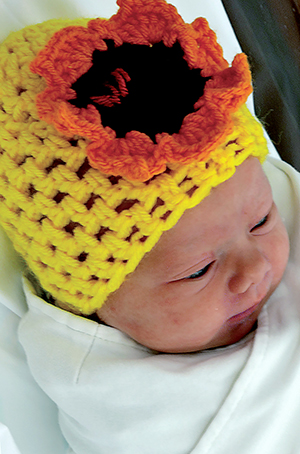 Erbrecht’s aunt taught her how to crochet when she was little, but she didn’t take it very seriously until an eye disease forced her to give up driving and quit work. She was looking for something to do with her time when her twin grandsons were born prematurely, and she noticed that there were almost always gifts from the hospital in their crib when she visited. This gave her the idea to start crocheting hats for preemies and newborns, so she started watching YouTube videos to brush up her crocheting skills and found she could make a lot of hats in a short amount of time.

“My one sister asked me what I was doing and I said ‘I don’t know … I’m making baby hats. I guess I’m just donating them to the hospital.’ And she immediately said she wanted to help out, but now she’s stuck with it!” Erbrecht says with a laugh.

Finding a hospital to donate the hats to was, surprisingly, a challenge for the sisters. “I called everywhere and I didn’t hear back from anybody,” says Rondinelli. “Then, I called Linda McIntyre at St. Clair Hospital, and she actually did call me back. I was really happy. She just said, ‘Sure, come on down’. Now, when I walk into the hospital with my bag, everyone is so nice and appreciative. I check in on the fourth floor, and there are these two ladies who are always so excited. They say ‘Here come the hats again!'”

The parents have been very appreciative as well, many of whom write thank you cards and send pictures to Erbrecht and Rondinelli thanking them for taking their time spent making something so special for total strangers. The sisters particularly enjoy the pictures because, other than the times the Steeler and Leap Day hats made it on the news, they don’t usually get to see the babies in their crocheted creations.

“The families are just so thrilled and excited. They have been telling their friends, and now when the friends come in, they are asking for hats, too,” says McIntyre, St. Clair Hospital’s Executive Director of Women and Children Services. “Kim and Audrey are just the greatest people. Their dedication to making these hats is really touching to us, and we are so happy to be working with them. We think our babies are pretty special here. They deserve what little extras we can give them.”

St. Clair Hospital cares for more than 120 babies each month, and Erbrecht and Rondinelli try their hardest to make sure there is at least one hat for each newborn. Erbrecht usually begins working a month ahead, but Rondinelli needs to plan more than two months out so that she can compete with her sister’s quick crocheting. In fact, she has already begun her red, white and blue hats for the Fourth of July in the hope that she will beat her sister in quantity the next time around.

Erbrecht and Rondinelli also enjoy making hats for their own friends and family, and they recently crocheted matching hats for their granddaughters’ baby dolls. “A lot of people ask me to make them, so I just make them and give them away. I haven’t sold any,” says Erbrecht. “If anyone wants to donate yarn, they can. But we aren’t making a big deal out of it, and we aren’t trying to make money. It’s just fun.”

Erbrecht spends the majority of her time making baby hats, and she hopes to continue doing it as long as she can, despite impending eye operations. Rondinelli is also committed to the project, because she is happy to help her sister with something that gives her purpose. But both sisters agree that their primary motivation is this idea of doing something small to bring another person joy. Rondinelli expressed this concept beautifully when she said goodbye at the end of the interview. She said, “Have a great day. Now you go and make somebody happy, too!”