Seton-La Salle High School has deepened its commitment to STREAM (Science, Technology, Religion, Engineering, Arts and Mathematics) by repurposing a campus building as a dedicated STREAM center. The center, to open in two years, will be in a building once used as living space for the Christian Brothers. Photo courtesy of qkArchiteture.

Seton-La Salle High School, McNeilly Road, is floating into 21st century education with STREAM, a program similar to STEM, which stands for Science, Technology, Engineering and Math. The two extra letters are for Religion and Arts.

The Catholic high school has not only implemented the program, originally coined by the National Catholic Education Association, but also is working with qkArchitecture to repurpose an older building on campus that will become the STREAM Center. The renovated building will include various labs and studios, including a robotics lab and commercial grade kitchen, dedicated to the subjects featured in the STREAM curriculum. An innovation lab, housed within the school, will be a space for students to test-drive new technology before it is incorporated into the entire school. 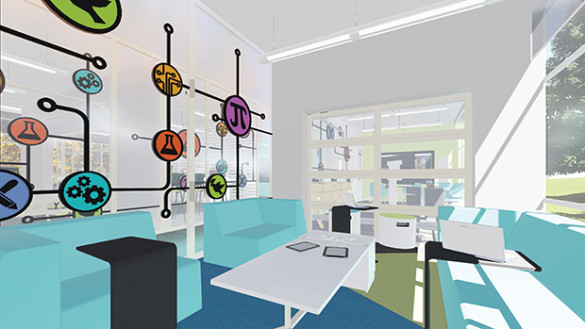 The new STREAM center, set to open in about two years, is located in the high school’s former Brothers’ House, an underused space where the Christian Brothers who originally staffed the school used to live.

School president Tom Dattilo and high school principal Lauren Martin, say STREAM allows students to follow their passions while maintaining their religious identity. “Our ultimate goal is to prepare these people for the rest of their lives,” says Dattilo, adding that knowledge of technology is essential to getting a job.

Although the STREAM center is not yet open, the school already has made upgrades to complement the program. The school has added 3-D printers in addition to new robotics and astronomy courses.

“Our goal is to offer a wide array of options for students to find a niche,” says Dattilo. Once the STREAM center opens, it will act as an incubator for students to try new programs and equipment, he adds.

Dattilo and Martin emphasize that STREAM is a student-centered approach to learning, allowing students to pursue potential career paths in high school. Martin hopes the center will “provide [students] a safe place to experiment and fail.”

Pictures courtesy of Lisa Mendicino, the Director of Advancement at Seton-La Salle