Mt. Lebanon’s trash and recycling contract expires at the end of the year. For the next few weeks, staff and commissioners will be evaluating several options for the next five-year contract.

This year, there were two bidders for the South Hills Area Council of Governments (SHACOG) trash collection contract, Waste Management, the current contractor, and Republic Services. The companies were asked to bid on a number of options in addition to the service residents currently receive.  Each of the 19 SHACOG communities will be able to choose from the menu of services before agreeing to a contract.

“There is a lot more to consider this year, and all of the options have a cost attached to them,” says public works director Tom Kelley, who has been working to shape the various proposals. 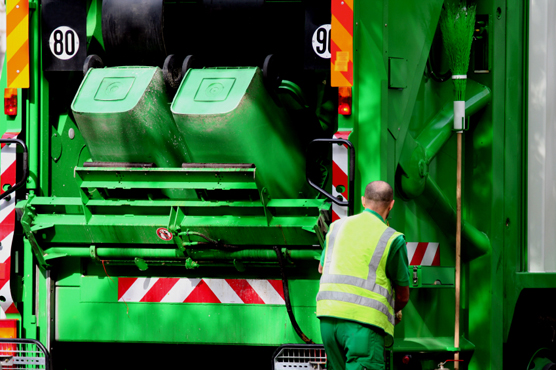 One option involves a move to automated recycling collection beginning in April 2015. Residents would be provided with recycling carts that would be picked up by trucks that are equipped with automated arms. This would require the purchase and distribution of trash carts throughout the community, and time to launch an education campaign.

Also under discussion is the possibility of on-call pickup of household hazardous waste, such as paint thinner and cleaning solvents, and of electronics, such as computers, printers and televisions. All of these items are prohibited from being lodged in landfills in Pennsylvania. Commissioners are discussing the possibility of implementing a Pay as You Throw program, where residents are charged based on how much trash they generate, but if adopted, the program would not begin until 2015 or 2016.

Presently, Mt. Lebanon schedules e-waste collection days, and residents can take household chemicals to one of several collections days scheduled by Allegheny County. If Mt. Lebanon adopts the new provision of the trash contract, residents will be able to contact the waste hauling contractor to arrange for special pickup of these items.

Commissioners and staff have been researching Pay-As-You-Throw, which would charge garbage fees based on how much trash a household discards. Implementation of any such system, if it were approved, would be several years away. But that system is still being investigated and discussed.

The commission has until the end of the year to make a decision on what will be contained in the new contract. If you would like to weigh in on trash and recycling options, contact the commission at commission@mtlebanon.org. You can also leave comments online at the Agendas and Minutes section of the municipal website, www.mtlebanon.org.