It’s very likely at this moment Ignacio Filippini is completely covered in sweat. We’re not just talking a glistening drop on the upper lip. We mean completely soaked from toes to pate. Filippini, the owner of Bikram Yoga Mt. Lebanon, is a specialist in a specific type of yoga called Bikram that calls for a 90-minute cardiovascular workout in a 105-degree room with 40 percent humidity. And now, he’s brought the practice to Mt. Lebanon, to his studio at 704 Washington Road.

Born in Buenos Aires, Argentina, Filippini came to New Jersey with his parents in 1991. They moved to Pittsburgh when he was a high school senior and he later received his degree in design from Carnegie Mellon University. After moving to New York City to do design work, he began practicing yoga as a way to relax. In 2009 he earned an MBA at Emory—just when the economy wasn’t welcoming to newly minted MBAs. So he submerged himself again in yoga, this time in Las Vegas at Bikram Yoga College of India, the nine-week teacher training program created by Bikram Choudhury. For the length of the course, teachers take two 90-minute classes every weekday and one class on Saturdays. (Sunday is for laundry.) 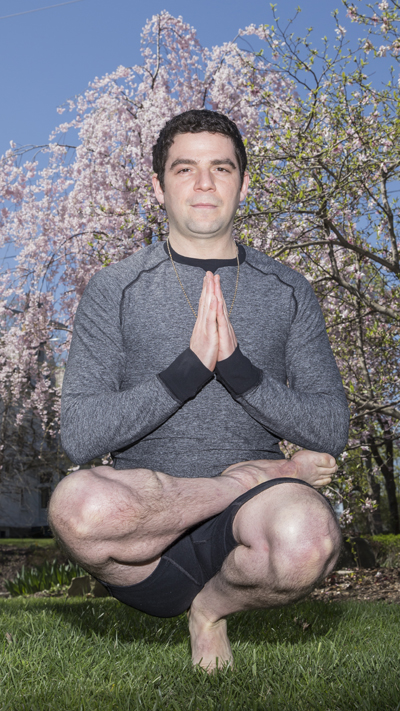 That certification allows Filippini to teach Bikram’s specific style of yoga. While all Bikram yoga is hot yoga, not all hot yoga can be called Bikram.

The 1,300-square-foot studio can hold 60 students. To start, Filippini is planning one class in the morning and one class in the evening, Monday through Friday, one morning class on Saturday and one afternoon class on Sunday. He expects to expand that schedule in late June. The introductory price is $39 for one month of unlimited yoga. After that, you’ll be able to purchase individual classes or a month’s worth of unlimited attendance.

Instructors teach in the front on a pedestal, correcting students verbally instead of physically, as many yoga studios do. The studio has men’s and women’s locker rooms with showers. Mats and towels are available for purchase or rent, and the studio sells yoga clothing. A special ventilation system controls odors and carbon dioxide levels.

Filippini knows people can be intimidated by Bikram yoga, which calls for 26 challenging poses (and two breathing postures) done twice in 90 minutes. The room is very hot, and beginners can get dizzy, nauseated or lightheaded. Many people don’t believe they’re flexible enough for this type of yoga. But Filippini promises if students stick with it, they will see major improvements in flexibility and strength.

“Breathing is mandatory; the rest is optional,” he says, noting even people in wheelchairs can do Bikram.

He will be offering beginners workshops, when students can come in and ask questions. He even will give tips for pregnant yogis during class and is looking at having classes for families, including children.

“You feel better; you feel clearer,” he says. “You get to turn off your mind.”