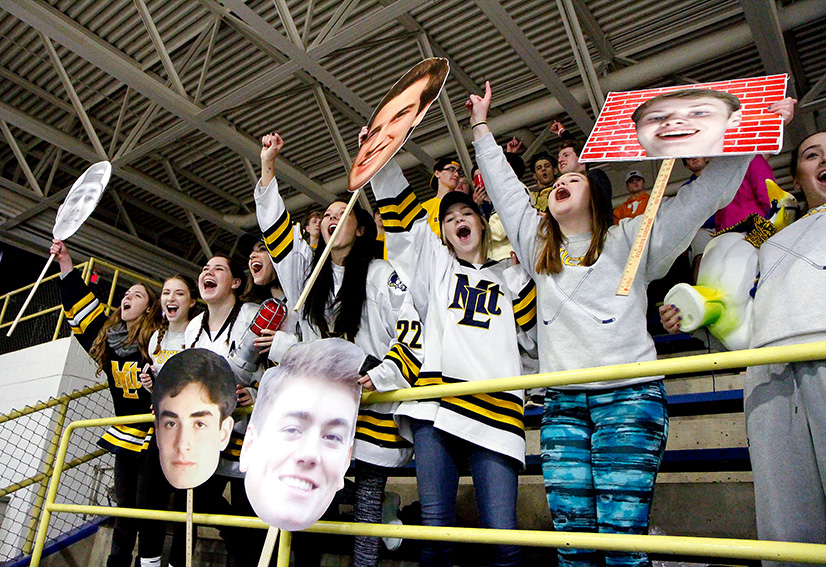 “Let’s go down there,” a woman says, referring to the home end of the stands.

“You mean by those screamin’ girls?” a man answers.

In addition to parents, students and other fans at the varsity team’s games, there is a loyal “screamin’ girls” section of what the team calls its “pucks.” A group of high school girls cheer wildly at every save by goaltender Max Clouser, every solid hit by a Blue Devils player and, of course, every Lebo goal—so into the games that they actually put down their cell phones.

The Pens Cup finals are scheduled for March 22 at the UPMC Lemieux Sports Complex in Cranberry.

The Blue Devils are giving their “pucks” and the rest of the community something to cheer about. The team is 11-4-1, good for second place in the West Conference of Pennsylvania Interscholastic Hockey League (PIHL) Class AA play, with a goal of winning the Penguins Cup and perhaps going beyond that to the state championships.

That end game is something the Blue Devils aimed for before the season began.

“We had a lot of team meetings,” says senior center Ryan Gist, adding that the team’s seniors did most of the talking at those meetings. “Our main thing was to get everyone to buy in to the same goal. We told them, ‘Buy in now for the Pens Cup.’”

The Penguins Cup AA tournament, which determines the champion of the western half of the state, begins March 6, with the final scheduled for March 22 at the UPMC Lemieux Sports Complex in Cranberry.

Sixteen games into the season, the Blue Devils look to be in great shape to qualify for the Penguins Cup tournament.

They are led offensively by sophomore winger Wyatt George with 21 goals, 29 points. Gist is next with 18 points, including six goals. Clouser, the No. 1 goalie, is 8-3 with a 2.81 goals-against average.

“We’re bringing back the Junior Blue Devils program so kids at the squirt and peewee level can work with varsity kids and get a taste of being part of the hockey community.”— High School coach Gary Klapkowski

The Blue Devils, as with all area high school hockey teams, are considered a club sport because they are affiliated with the PIHL. There are Mt. Lebanon Hockey Association teams at both middle schools, plus junior varsity and varsity teams at the high school.

High school coach Gary Klapkowski, who took over four games into the 2015-16 season, also oversees an organization that bridges down to youth levels. He is striving to get all the age levels to use the same schemes and strategies for consistency when players move up.

“We are bringing back this year the Junior Blue Devils program, so kids that are in the squirt and peewee level can come out and work with the varsity kids and get a taste of being a part of the hockey community for the high school, and that will help us get more players later on, kind of bring them through,” Klapkowski said.

“Coach Gary talks a lot about consistency,” Gist says. “As long as we keep staying at our playing level—dumping the puck, chasing, outskating the other team—I think we’ll be good and stay on track for the Penguins Cup.”

The Blue Devils have a senior-heavy defense and depth at forward. They decidedly don’t consider themselves a finesse team in terms of style.

“The foundation of how we win is hard work and skating, coming out and making sure that every guy on the team is going as hard as they can all the time because we have a very good skating team,” Klapkowski says. “That is what makes us successful. We don’t skate, we don’t win. If we come out and we try to outskill the other team … getting fancy doesn’t work.”

Lebo’s final home game is February 6 against Plum. The regular season ends February 21 at Shaler. The high school season is a modest 20 games, in part because some players also play on a travel team.

“The foundation of how we win is hard work and skating… getting fancy doesn’t work.” — Coach Klapkowski

“Some of the players, their other team is actually their priority. They play a high level of travel,” senior defenseman Garrett Garlick says. “But whenever we show up here, this is still, I think, most of the kids’ favorite team. It’s always been my favorite team. Just closer with the kids.”

One Lebo player doubles not with a travel hockey club but as a lineman on the Blue Devils football team. His future most likely is in football, but he’s also hooked on hockey.

“I’ve been playing hockey since second grade,” senior left winger Kenneth Schrader says. “It’s always nice to play two sports, especially to have the athleticism to be a part of both teams.”

One player who isn’t doubling up on teams is Clouser, the goalie who joined the team this season. His father, Michael, is from Mt. Lebanon but moved around the world before returning. Most recently, the family lived in British Columbia, Canada, where Clouser honed his skill playing junior hockey.

“Everything I learned (as a goalie) came from there,” he says. “There are a lot of good shooters there. A lot of guys move on from there.”

Playing for Lebo, though, gives him a chance to play for a school rather than a community. He appreciates the support, the team pasta dinners hosted by one player’s family or another the night before games.

“Here it’s more involved with the school,” he says. “It’s exciting knowing that a lot of your classmates are watching.”

Especially when the team is winning.

The Blue Devils have two state championships in their history, in 1976 and 2006.