Mt. Lebanon has had its share of traffic woes in the last couple of construction seasons. We would love to tell you this year will be different. Really, we would love that.

Remember last summer’s seemingly-endless gridlock that popped its ugly head all around town as a variety of road, sewer and utility projects ground our patience into a fine dust? 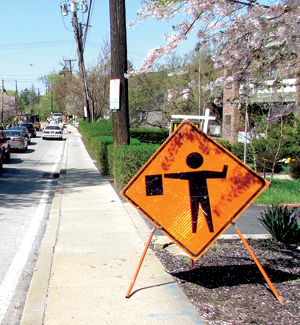 Well, the good news is, those projects are mainly over. The bad news, of course, centers around the “mostly.” Yes, we have a few more things on the menu for this summer. We’ll let you know what they are, but first, we should focus on all we have accomplished so far.

On Washington Road, a PennDOT project slowed traffic from Alfred Street to The Galleria for most of the spring and summer, but the result was $5.3 million worth of improvements, including ADA curb cuts at several Washington Road intersections: Cochran, Lebanon, Castle Shannon, Jefferson and Woodhaven.  Also included in the project were new traffic signal poles, lights and controls at three intersections; a second thru lane where Gilkeson changes to Connor Road, making for a smoother flow of traffic; and resolving a drainage problem on Navahoe Drive near The Galleria, where water would overflow a catchbasin and freeze in the winter, creating icy conditions.

In the Beverly Road area, there was a lot of buzz about what some residents thought was an oversized signal arm, better suited to a turnpike than to a residential district. Public Works Director Tom Kelley says Mt. Lebanon had no say in the design of the arm, since it was a PennDOT project, partially paid for with Federal Highway Administration funds, and thus the specifications were non-negotiable. “The good news is, it’s really, really stable,” says Kelley. Also it will most likely not need to be replaced for a very long time. The new signal configuration eliminates the need for underground traffic control loops, which were always a pain to repair, and also ties all of the lights in the corridor together with one controller.

After a successful project on Washington Road in 2007 that synced up a series of traffic lights and dramatically improved the flow of traffic, last year Mt. Lebanon received grant money from Allegheny County and from the Southwestern Pennsylvania Commission (SPC) for two projects designed to improve the flow of traffic on Bower Hill Road.

The Allegheny County Community Infrastructure and Tourism Fund gave the municipality $100,000—contingent on providing a local match of $150,000—to upgrade all of the traffic signal equipment at the intersection of Bower Hill and Segar roads. St. Clair Hospital donated $40,000 and the rest came from Mt. Lebanon, so the $250,000 upgrade will come at a cost of $110,000 of Mt. Lebanon tax money.

Mt. Lebanon has received $65,100 from the Automated Red Light Enforcement (ARLE) program, a statewide endeavor that takes money collected from fines for drivers who go through one of 25 traffic lights in Philadelphia that are equipped with ARLE cameras and distributes it to communities across the commonwealth to fund their own traffic and pedestrian safety projects.

The municipality will use the money to improve pedestrian safety at a mid-block crossing on Washington Road at Washington School by adding a new flashing beacon to alert motorists of pedestrians. Additionally, there will be lights embedded in the pavement that will make the intersection more visible.

Also in the works for later this year is a number of improvements to dangerous intersections; this work was recommended as part of the municipality’s comprehensive plan, which was adopted by the commission late last year.

Even before the adoption of the plan, Mt. Lebanon acted on one of the suggestions and funded a road safety audit, a formal safety examination of roads and intersections conducted by Mt. Lebanon’s traffic consultant, Trans Associates. The audit, conducted in 2012-13, took a look at the 10 Mt. Lebanon intersections or stretches of road where the most pedestrian or bicyclist and vehicle crashes with injuries occurred over a five-year period.

Based on the study, the committee made a number of recommendations, to be implemented in stages over the next few years, at a total cost of $432,500. The first stage calls for changes in the Washington Road Business District, Washington and Longuevue/Woodhaven, Washington and Cochran, Cochran and Cedar, and Cochran and Scrubgrass, at an estimated cost of $115,500.

The remainder of the recommended improvements, contained in the comprehensive plan, are slated to be done as money becomes available, says municipal manager Steve Feller.

Adding to the traffic obstacle course will be the work Columbia Gas is doing in Mission Hills, replacing underground pipe along Jefferson, Mission, Avon, Brucewood and Parkway drives. This work is expected to continue through the end of May. More work is expected to be done in Sunset Hills, a continuation of last year’s project, although at press time Mt. Lebanon has not received any notification of when this work will begin.

All of this is in addition to our regularly scheduled street resurfacing and reconstruction work, which, subject to budget limitations,  will include:

And this doesn’t even count the massive PennDOT parkway project this summer, from I-79 to the Fort Pitt Tunnel. So, build in some extra time, keep your cool, and think about the future, when you’ll be zipping along the roads at a sensible speed, and the lights will all be working together to send you on your way. It’s coming. It will be beautiful.