What is recitative? Can you count to five in Italian? What is the difference between staccato and legato? If you don’t know the answers to these questions, you may want to ask the third graders at Markham School.

They began studying opera last fall under their music teacher, Mariann Fox, and they eagerly showed off their knowledge to the teaching artists from Pittsburgh Opera, who visited as part of Pittsburgh Opera’s Opera Trunks program. 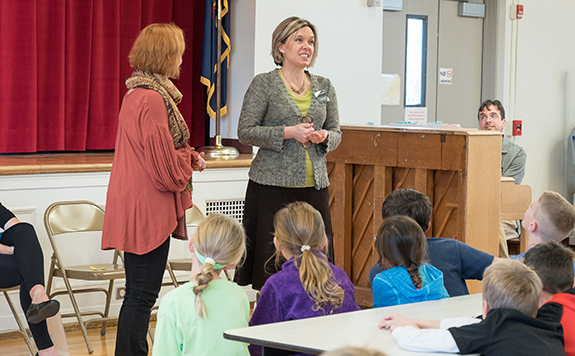 The Opera Trunks program comes in three varieties—there’s the Carmen trunk, which teaches about Roma culture and Bizet’s music; the Madama Butterfly trunk, which features Japanese culture and Puccini’s music; and then there’s the Opera Improv trunk, the one that came to Markham, which engages students in creating an improvised opera.

The Opera Improv presentation at Markham was called A Day at the Dentist. The teaching artists built the performance from scratch by allowing students to choose between different arias, using recitative (the sing-talk device that moves the plot forward) and adapting blocking (stage movement) on the spot, while teaching the basics of opera along the way.

To keep the kids engaged, the artists employed guessing games, student participation and hand motions illustrating musical terms. When the children were asked what languages the arias were in, the answers varied from “Russian” to “Pig Latin,” but often someone would get it right after only a couple of guesses. Later, a spirited recitative between two students and a teaching artist about a trip to Mineo’s Pizza House thrilled the young audience, while also teaching them about the important plot device.

“You never know what the kids will come up with,” laughs Mia Bonnewell, Pittsburgh Opera teaching artist who is also a Mt. Lebanon resident who attended Markham School. “You really have to know your craft and be familiar with the team playing that’s necessary for theater. And even though we use standard arias, we have to learn to perform them in creative ways.”

In Bonnewell’s case, the kids chose Cherubino’s upbeat aria, Non so piu cosa son, cosa faccio from Mozart’s The Marriage of Figaro. In the context of the opera, it is sung excitedly by a pageboy about the wonders of love. In the context of A Day at the Dentist, however, Bonnewell had to take the aria completely out of context to play a little girl who is afraid at the dentist’s office.

If it was challenging for the artists, no one would ever have noticed, as they transitioned seamlessly from aria to recitative to quartet, while the exuberant audience cheered, “Brave! Brave!” (a word the students learned earlier, which is the version of “Bravo” to be used when addressing a splendid performance by a group of women).

“I always wanted to become an actor, so this was cool for me,” says Macy Howard, a third-grader who was very impressed by the performance. “It also taught me not to be afraid of the dentist. I sometimes get scared there, but this makes me feel braver.”

Howard’s classmate Eric Drodza was also an enthusiastic audience member. “I thought they were actually going to brush their teeth with those big brushes!” says Drodza of the props. And despite some familiarity with Spanish and Chinese, he was surprised to find he didn’t know much Italian. “I never even counted to zero in Italian before today! Now I can count to 10.”

Pittsburgh Opera’s Opera Trunks program is a unique opportunity for students. “Participating in this program is very rewarding,” says Bonnewell. “It exposes kids to something new that could wind up being an important outlet in their lives.”