Whether it’s Bogie who says it, or your significant other, it’s always romantic. All of the cliches are true; the French do not like to speak English, Parisians are not warm and friendly, waiters and shop clerks will treat you like you are five years old when they learn you are American.

All true, but Paris is still the center of the universe for beautiful things. The galleries and museums are so well known and written about, that some people feel a bit disappointed when they tour the Louvre or the Musee d’Orsay. Some feel that they have been there before. You will quickly discover that you could go to a different gallery or museum every day for a month and still see only a small smattering of the art in Paris.

The real jewel of Paris is the city itself. Whether walking along the River Seine or through the Tuileries, one is constantly overwhelmed by the architecture, the bridges, the statuary, the streets and boulevards as well as the Eiffel Tower, the Arc d’ Triomphe, and Notre Dame. 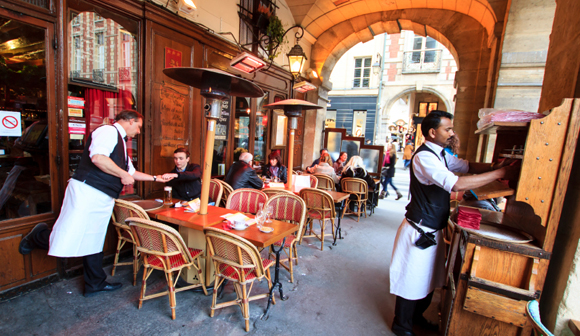 The famous restaurants, such as La Tour d’ Argent, might require a reservation four months in advance (www.latourdargent.com). However, I have found that almost every street will have more than one restaurant to choose from and even a random choice will usually be better than one of your favorite restaurants back home. I have found that most restaurants will have a set menu of the day, usually tailored to show off the talent of the chef, as well as the food itself.

Like most big cities, Paris has definite neighborhoods that have some special feature unique to the area. One of my favorite areas is the neighborhood surrounding the Centre Pompidou. This modern art gallery is an architectural marvel by itself, but always shows displays of the latest, contemporary art of its day.

A few blocks away is the Musee Picasso. When Pablo Picasso died, his estate, which consisted of hundreds of his paintings, was assessed by the taxing authorities at an amount that could never be paid by his heirs. They made a deal with the French government, who created a unique gallery for the paintings. You should be warned, however, that the number of paintings in each room takes every square inch of wall space, and can be overwhelming. If you tire of paintings, a walk along the Rue du Faubourg Saint-Honore, will take your breath away with its shops of every major fashion house in Paris. A warning! On your first visit on this street you should leave your credit cards in the hotel safe.

The hotels are completely Parisian as well; overwhelming, charming and expensive. Some of my favorites include Le Grand Hotel, Hotel Scribe and the Lancaster. All of them are close to the Opera House and many of the more popular shopping areas. I like Printemps Department Store.

Getting to Paris is fairly easy from Pittsburgh. Delta has a non-stop flight during the summer. Because I have been traveling to Paris for more than 30 years, my favorite way of getting there is a bit involved, but much more comfortable on my aging body. I prefer taking a daytime flight to London. The flights leave Pittsburgh around 6:30 A.M., Pittsburgh time and arrive in London at 9:30 at night (www.kayak.com). I prefer spending the night at the St. Pancras Hotel, which is attached to St. Pancras Station, where the Eurostar originates. The next morning one can catch the Eurostar train (www.eurostar.com), which goes under the English Channel and arrives in the Gare d’ Lyon in the center of Paris two hours later. Although this adds a day to the trip, I have learned that I don’t gain anything if I arrive in Paris at 9 A.M., (3 in the morning, Pittsburgh time) and suffer from jet lag for the first three days.

Bienvenue a Paris. We will always have Paris.