Commercial districts manager Eric Milliron described Monday’s Public Space Improvements meeting as a “once in a lifetime” chance to discuss the functionality of the Washington Road business district, also known as “Uptown.” More than 45 people attended the open session, many of them business owners or landlords in the district. Lead by Milliron and Christine Mondor, principal of  evolve environment::architecture  consultants, the two-hour meeting tackled some of the ongoing problems in making Uptown a destination.

Specifically, the conversation centered on four topics: streetscape improvements, connecting to the light rail transit station, revitalizing Parse Way and providing connections to other community assets, such as Clearview Common and the Mt. Lebanon Public Library. Mondor related Mt. Lebanon’s business district to East Liberty’s, with a main street in the middle (Washington Road for Mt. Lebanon, Penn and Centre avenues for East Liberty); a major transit line (the LRT for Mt. Lebanon, the East Busway for East Liberty) and similar business districts focused on dining. Both also have alleys near the transit that could be considered at one point “unpleasant.”

The discussion was not about what types of businesses the attendees wanted to see or what sorts of ordinances they’d like passed to manage behavior in the district; it was solely dedicated to focusing on “how the district works,” Milliron said. The area under consideration is Washington Road, bounded by Shady Drive to the north and Alfred Street to the south, although some attendees believed the district should continue along Castle Shannon Boulevard to Scott road. The entire area is part of Mt. Lebanon’s National Historic District.

Mondor opened by saying that Washington Road, which  21,000 to 40,000 vehicles travel every day, is one of the last intact community business districts as you head north into the city, and that places such as Dormont, Beechview, Lawrenceville, Squirrel Hill and Millvale all serve as kindred spirits.

But rather than being  a “drive-through corridor,” the goal is to make Mt. Lebanon a destination that is  competitive in the overall region, Mondor said.

At the heart of the streetscape improvement ideas Mondor proposed were some obvious items, from repaving the broken and heaving sidewalks to replacing light poles, trash cans, benches and reconfiguring the planters so that trees could create a natural landscape and enhance the district, while providing ample room for pedestrians on the sidewalk. The planters, she said, are inconsistent and serve as a missed opportunity to brand the district. They create maintenance issues and have problematic height, which is neither tall enough to provide seating, nor short enough to allow walking on in crowded conditions. In some instances they block the street so pedestrians can’t see what is going on. 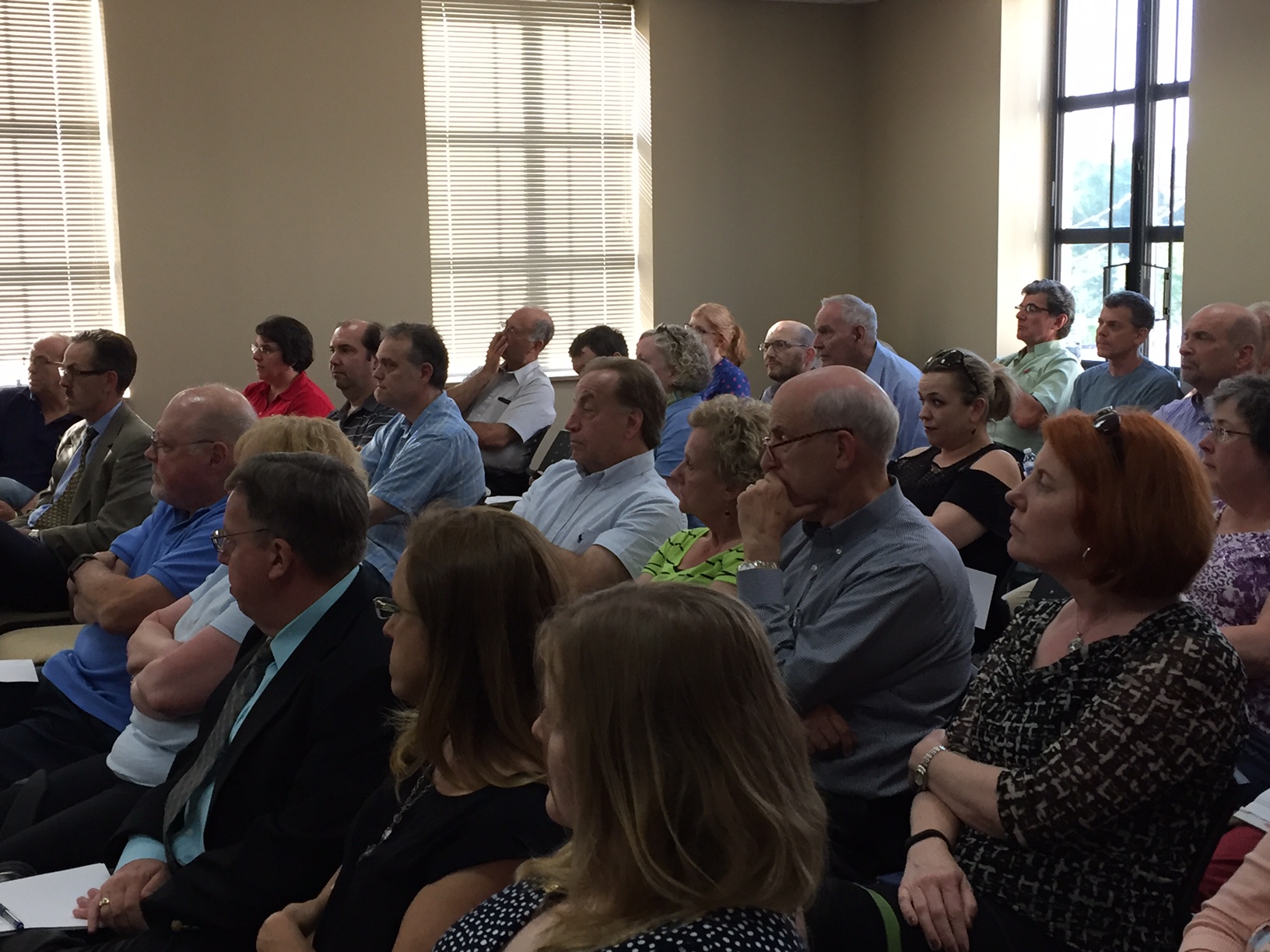 Tree planters could allow for multiple kinds of plantings and also integrate with other objects on the road, such as the future possibility for pay stations for parking, bike racks and other service items.

Pedestrian access could be improved by “pinching in” toward the road at crosswalks with planters and perhaps slightly elevating the crosswalks themselves, which is a prompt for drivers to slow.

The opportunity in improving these amenities is to make Washington Road “a place to stay.”

Washington Road’s connection to the LRT station behind Parse Way also needs improvement. It is not of a “human scale,” Mondor said. Signage is chaotic, and riders almost need to know where the station is before they can look for it. Worse, she said, the signage exists more for people on the road to get to the T, instead of to make the 1,000 to 2,000 T riders to feel like they’ve entered Mt. Lebanon when they get off. We should consider “reversing our perception of the station and create a new front door for Mt. Lebanon,” she said.

“Activating Parse Way” was the terminology used to describe turning the dumpster-filled alley into a pedestrian thoroughfare. “It needs a goodly amount of visioning,” she conceded. Repairing the crumbling infrastructure, consolidating dumpsters, encouraging businesses to use the entrance and exits on Parse could all help improve the atmosphere. So could adding places for parents and children to play and creating a destination on either end of the alley. By way of example, she showed slides of the East Busway area and how that part of the East End has integrated its transit with the neighborhood, with dramatic lighting, seating and planters.

Parse Way could better connect to Clearview Common. Perhaps traffic could be limited to buses just traveling one way. Aesthetics could be enhanced with artistic lighting. Programming could follow with the area becoming a vibrant outdoor center with space for a farmers’ market, movie screenings, televising live sporting events, live music, outdoor dining and more. Some attendees were concerned that opening the alley might encourage people to loiter and encourage crime, but Mondor countered that putting foot traffic on that road would deter such behavior.

After Mondor’s presentation, participants broke into smaller groups and viewed photographic examples of some of the ideas in other communities. They had the opportunity to rate ideas they liked, and they also could see detailed maps of the current Mt. Lebanon business district for reference. Members of the Mt. Lebanon Partnership and Commission attended the meeting as well.

The next step in evolve’s plan, which costs approximately $12,000, is to aggregate comments from the meeting, cost out some of the ideas and prepare a final report by August, Milliron said. Any plan for the district would likely be implemented in phases over the long term.