It was the cymbal crash heard ‘round Mt. Lebanon. Thirty years ago, music teacher Richard Minnotte, Abington Drive, debuted the 15-member Mt. Lebanon Percussion ensemble at Mt. Lebanon High School’s concert band’s spring program. The group played one song. Since then, the percussion program has boomed to 175 students in grades 4-12 with eight concert ensembles, two world (African and Brazilian) ensembles, two specialty ensembles and a marching percussion section. In 1997 the adjudication panel for the Golden Gate Music Festival in San Francisco, California, called Mt. Lebanon’s percussion program “One of the finest examples of music education we have ever seen.”

To recognize the percussion ensemble’s 30th anniversary, a special alumni concert will be included in this spring’s Evening of Percussion concert series. Minnotte expects 75 to 100 former students to attend; they will perform alongside current students. The alumni concert is 1 p.m., Saturday, May 24, and will feature photos and video clips of past performances. 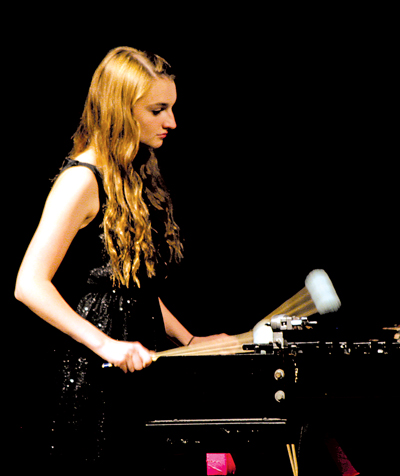 While many of the former percussionists haven’t played since graduating, Minnotte says the muscle memory is still there and it comes right back. Minnotte estimates only about half of one percent of the percussion ensemble students have gone on to music careers—most as teachers—and there will be a special “music majors” section for them. One alumnus expected to perform is Tom Keck, class of 1990, who now directs the University of Miami’s marching band. In addition, alumni and current students can meet at a May 25 luncheon.  If you are a former ensemblist who would like to attend, email Minnotte at richminn@aol.com.

Minnotte hired composer Nathan Daughtrey—a top composer for concert bands, wind ensembles and percussion—to write a special score for the 30th anniversary concert called “The Dreamers of Dreams.” Students met Daughtrey when he stopped at the high school in April to lead a rehearsal.

The other concerts that weekend are 7:30 p.m., Thursday and Friday, May 22 and 23, and 7 p.m., Saturday, May 24. All concerts will be at Mt. Lebanon High School’s Fine Arts Theater and tickets are $10 for adults; $8 for students. These concerts generally sell out, so get them early at mtlperctickets@gmail.com and 412-563-4201. Minnotte says most people come to the concerts expecting to hear a lot of drums, but the percussion ensemble is heavier on vibraphone, timpani, bells, chimes and marimbas, although you will definitely hear your share of snares, tenors, basses, bongos and congas.

Over the years, the percussion ensemble has, ahem, drummed up accolades and honors. They have played at the Pennsylvania Music

Educators Association annual convention in Hershey four times and the 2006 National Association of Music Educators national convention in Salt Lake City, Utah—the only percussion ensemble in the country to be invited to perform. Since 1996, the Concert Ensemble has made annual appearances on KDKA-TV’s Children’s Hospital Free Care Fund Telethon and released four CDs. Two years ago, the Marching Percussion Ensemble performed during the player introductions at the 2011 NHL Winter Classic.

Minnotte—now in his 40th year with the school district—serves as the director of percussion studies, conducting the concert ensemble and percussion orchestra.  Assisting him are principal assistant director Subha Das and assistant directors Jason Miller, Daniel Meunier and Jeremy  DeLuca.

Looking back over the last three decades, Minnotte is naturally proud—and not just musically. “Overall, we prepare kids for life, not just music,” he says. “We teach time management, how to work with others and teamwork,” adding that most kids never play again after they perform Khachaturian’s “Sabre Dance,” the traditional closing number, at their senior concert.

“They find out what it’s like to be really, really good at something.” Minnotte says. “And the process you go through to become really good at anything.“ mtlpercussion.org.