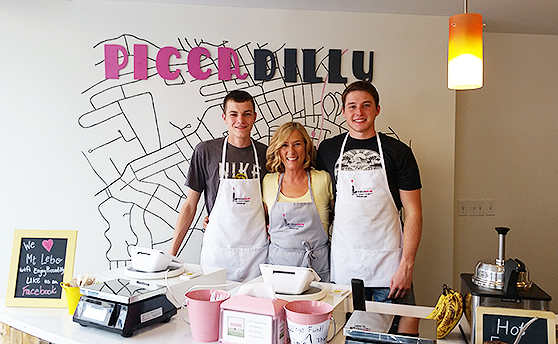 Piccadilly Artisan Yogurt has something for everyone, whether they’re sweet tooths, tart lovers, artists … or even people who don’t like dairy.

Owner Lyllian Rose offers customers 12 organic frozen yogurt flavors and four vegan flavors, made from coconut milk.“We try to get everything we can local … except for the coconut milk, because there aren’t coconuts around,” she says with a laugh.

Rose and her husband, Billy, came up with the idea to open a yogurt shop last April, after Yogli Mogli, the couple’s former tenant at the 695 Washington Road location, closed. Piccadilly’s grand opening was July 3 and the store hours are Sunday through Thursday, 12 to 10 p.m. and 12 to 11 p.m. Fridays and Saturdays.

Rose had previously visited the Piccadilly located in Cleveland Heights, Ohio. She was delighted by the taste and concept of the organic artisan yogurt, and wanted to bring the healthy treat to Mt. Lebanon.

“We shouldn’t have to try so hard to take things that our bad for us out of our food,” Rose says. “It shouldn’t be the norm to put those bad things in food in the first place.”

The owners of the first Piccadilly helped Rose contact two Amish dairy farmers, a father and son, who supply the milk. Although they share a name and passion for yogurt that tastes great without additives, Rose’s shop and the Piccadilly shop located in Ohio are independent from each other.

“Other than the fact that we helped each other and work with the same farms, we are independent,” Rose says.

The milk used at both locations is vat pasteurized, meaning the farmers slowly raise the temperature during the pasteurization process. This differs from most modern pasteurization techniques or “flash pasteurization,” a much faster process that allows larger quantities of milk to be processed, but also destroys some of the milk’s natural nutrients.

After pasteurization, the product comes to Rose in yogurt form. Then she and her staff mix the flavors. Rose oversees a staff of 13, many of them college and high school students form Mt. Lebanon or neighborhoods nearby.

19-year-old Mark Kokot, a Mt. Lebanon High School graduate, is working at Piccadilly until he returns to Morgantown for his second year of college at West Virginia University.

Kokot has a hard time deciding what he likes best about working at Piccaddilly.

“I like working with the mixing machines … and talking to the customers,” Kokot says. “Actually the yogurt is the best part of the job,” he later adds.

The inside of the store matches the upbeat personality of its owner, with bright yellow, pink and green decor. Many of the accents pay homage to the City of Pittsburgh. A set of wooden skyscrapers line the inner wall. Billy Rose collected the wood from the building’s basement and cut them out to resemble Pittsburgh structures, like the Highmark and PPG Place buildings surrounding Market Square.

Rose made framed profiles of the artists who created the pictures and furniture in the store and intends to hang them up on one of the shop walls for her customers to see.