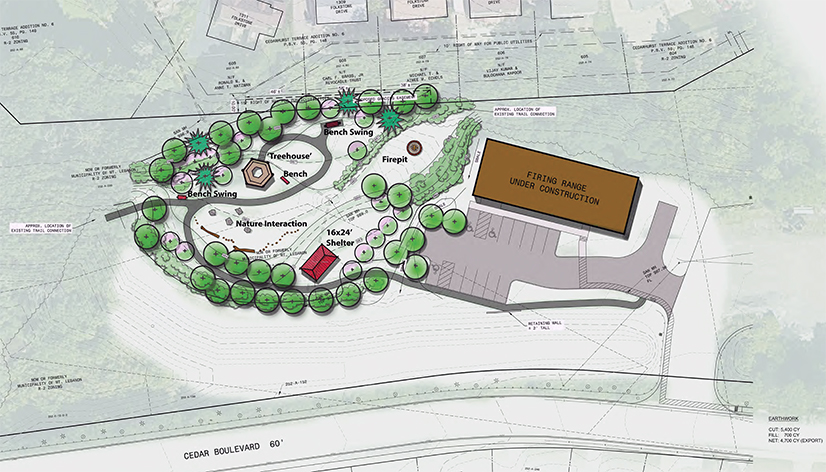 The Mt. Lebanon Commission is considering building a multilevel recreational trail connecting the area along Cedar Boulevard with an existing trail in Robb Hollow Park.  As plans are still under discussion, the area may include some or all of the amenities shown in the drawing.

An area along Cedar Boulevard has become available for recreational use as the result of the ongoing public works site improvement project. The Commission is considering creating a tiered walking trail there that connects to the existing trail in Robb Hollow Park.

The site of the proposed trailhead currently is a large dirt pile that resulted from excavation for the public works project and the replacement of a section of storm sewer under the site that was damaged during storms last June. The pile of fill is currently 15 feet higher or about 9,000 cubic yards larger than engineers projected, because of several unforeseen circumstances: excavation for a stone retaining wall along Cedar Boulevard, pipes installed behind the salt dome, wet weather conditions that required contractors to scrape in order to work, and the replacement of the 96-inch storm sewer that collapsed during a major storm. In addition, the Federal Emergency Management Agency required that the drainage trench running through the site be widened to take the property out of the flood plain.

The contract for the public works project did not specify that fill in excess of the design elevations would be removed; it was expected the fill area would be covered with topsoil and turned into a meadow, as originally intended when $132,000 was set aside for the greening of Robb Hollow Park more than two years ago. Constraints of the narrow site and the excess fill now preclude following through with the plan for a meadow, as having the excess fill carted away would cost $194,000, according to Municipal Engineer Dan Deiseroth.

Which leaves us needing to “make lemonade out of lemons,” Deiseroth said.

Commissioners expressed concern that they were not apprised earlier of the magnitude of the dirt pile, which Deiseroth said “crept upon us.” However, after a lengthy discussion session on January 22, they voted to seek bids on a plan recommended by the municipal parks advisory board that would reconfigure the dirt pile into tiered slopes from ground elevation to the top of the pile. Landscaping and amenities such as benches and a shelter would be included. Engineers estimate the total cost at $165,000.

The parks board considered two other plans for creating a trail but ultimately agreed that the plan they have recommended would be welcomed and used by more residents. Parks board member Elaine Kramer, who rendered the drawing, said that although the plan is not what was conceived of two years ago, “the parks board wants greening.”

Finance Director Andrew McCreery assured the Commission there is enough money remaining in the commission-assigned funds to pay for the trail and amenities, as there were no change orders in the first two phases of the public works project. The third and final phase of the project is currently underway and is expected to be completed fall 2019. Neither the contingency fund nor the Robb Hollow greening money was part of the 2017 bond issue that funded the public works project.

As a result of the excess fill, the tiered trail would be a different outcome than what was originally envisioned for the site, but it would still provide greenspace and the opportunity for recreation. As Deiseroth pointed out, “This is manufactured land. The public works project created this land for public use. Without the public works project, you don’t have any area to do anything with.”