If resume building begins in elementary school, as some people contend, then summer is a prime opportunity to get ahead. High-pressure academic enrichment activities—science camp or web design classes—fill many kids’ July and August schedules.

Bucking that trend, Mt. Lebanon Recreation Department’s Summer Playground Camp continues to thrive after more than 50 years, allowing children to choose from a menu of fun, loosely structured activities in a well-supervised environment. Mt. Lebanon’s traditional day camp doesn’t promise to help kids excel in the classroom, but the campers acquire skills that will help them in life, says Anne Babish, a camp director for seven years, the last three at Markham.

“Kids get to come and decide what they’re doing for the day and make it their own,” says Babish, who is teaching at Foster School this semester. “Camp really gets them introduced to standing on their own two feet.”

Playground Camp runs for six weeks, Monday-Friday from 9 a.m. to noon at Foster, Hoover, Jefferson, Lincoln and Markham Elementary Schools. Children who have completed kindergarten through third grade may attend at a cost of $50 per week or $250 for the full six weeks. That translates into $10 a day—less if you go the whole six weeks—a bargain no babysitter is likely to beat, as Pat Cannon, Recreation Program Manager, points out.

At each site, there is a camp director, an art director and three or four college-aged counselors. Nature activities, sports, free play and art are the core of camp with special activities spread throughout the schedule. Police officers and firefighters pay visits. Mt. Lebanon Public Library offers Storyteller Day. There’s Water Day, Snow Cone Day, Backwards Day and Spin Art Day. And each week has a theme—something like Around the World. Friday is Field Trip Day. Trips range from seeing a movie at Destinta in Bridgeville to rides and games at Chuck E. Cheese to an all-camp carnival that brings children from all the schools together at Jefferson Field.

Camp activities keep the children busy and engaged but allow them to relax and socialize. As they play kickball or make art, they make friends. The overall goal of camp is  “to build social skills in a less stressful environment,” says Cannon.

Ohio State student Katie Martina, a Linda Lane resident and a counselor last year, likes the fact that camp activities spur the children to use their imaginations.  And while the games might look like sheer fun, the camp staff tries to embed a lesson in each activity.

“I always say don’t come unless you bring your brain,” says Jefferson Elementary Camp Director Susan Gibala, a phys ed teacher and volleyball coach at Hempfield High School who has worked with the program since 2003. Gibala says the relay races she organizes, where kids pass off batons as they run around the track, teach them how to cooperate and work as a team. 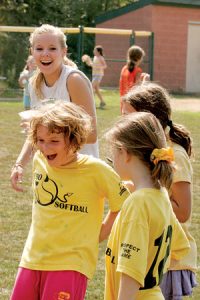 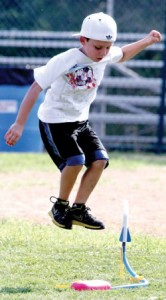 Many Playground Camp staffers return year after year, providing continuity parents value. Camp Supervisor Ray Pietras started out as Lincoln’s camp director in 1978. He applauds the camp’s rich history and attributes much of its success to the fact that it has stayed true to its mission, despite changing times.

Three generations of some families have attended. “Parents want to pass down their own camp experiences to their children,” says Babish, who has been involved for 15 years, beginning as a camper. “My mom and her sisters went, and my cousins went.”

Counselors often apply to work at a camp because of their positive experiences as kids. “I remember looking up to the counselors,” says Brookes Bratten, who marked his third year as a counselor at Jefferson in 2011. An Ella Street resident and Robert Morris University student, Bratten believes in encouraging kids to play outdoors and be active so they don’t spend too much time watching TV and playing video games.

Edinboro grad Jackie Hareza of Cedar Boulevard has worked with Playground Camp for three years and was art director at Jefferson Elementary last summer.  Her favorite part of the job is helping the kids accomplish things they thought they couldn’t do, whether it’s finishing a challenging craft project or mastering the rules of a new game, she says: “Seeing them kind of confused and watching them figure things out can be really rewarding.”

Note:  You can register for summer playground camp beginning April 1 at www.mtlebanon.org.