A fun sports event can also be challenging for children with autism, such as Roman Salamon, right, who may be especially sensitive to bright lights, loud sounds and other distractions.

Here’s a number that is hard to comprehend. One in about 47 boys has autism, according to Lu Randall, executive director of ABOARD’s (Advisory Board on Autism and Related Disorders) Autism Connection of PA. The 501(c)3 nonprofit agency provides support, education and advocacy for families dealing with autism and related disorders.

Girls also are diagnosed with autism, but much less frequently [about 1 in 250], adds Randall, who has a master’s degree in rehabilitation counseling and has worked with families dealing with autism for 19 years. And it doesn’t matter what color you are, what language you speak or how much money you make, she notes; autism crosses all the lines.

Randall spoke this fall to the Mt. Lebanon Police Department as part of a week-long training program aimed at teaching officers how to help people and protect themselves when responding to various scenarios involving people with autism and other neurological disabilities that cause atypical behavior.

“It’s important to make ourselves aware of any kind of special-needs situation,” says Staaf. “It can give our officers some extra tools when they encounter an autistic resident.”

Take a look at any group of young boys in a classroom or on a playing field, and it may seem incredible that a disorder people never heard much about until fairly recently—there has been a 10-fold increase in diagnosis over the past 40 years—could be so pervasive. OK, sure, some of the boys are fidgeting or daydreaming or not following directions, pushing each other or perhaps acting out when they don’t get their way. That’s just normal boy stuff, right?

Maybe, maybe not, says Randall, herself the mother of three boys, one with autism. Autistic children’s brains are different than typical brains, she explains, which causes disorganized thinking, literal thinking (which can get them into trouble—more on that later) repetitive actions, violent tantrums, risky behaviors and even seizures.

“Autism gets noticed when the child can no longer meet the demands of the environment,” she explains.

Getting noticed can mean a lot of things—just like “autism”—a spectrum of syndromes and disorders, some more limiting than others—can mean a lot of things. Some children with autism are non-verbal, with behavior their only way of expressing their feelings; others speak fluently but are extremely sensitive to sound, touch or light. Many are very intelligent, with interests that become obsessions and can lead them to “wander” in search of what fascinates them—trains, video games, or worse, water. Between 2009 and 2011, 91 percent of children with autism who wandered away from home and died had drowned Randall says.

Autism Connection, founded in 1996 and offering 76 support groups in 43 Pennsylvania counties, is staffed by professionals who are also parents of children with autism. One of the organization’s goals is to teach people to become their own advocates. Another is to raise community awareness, so that neighbors, coaches, teachers, police officers and others will recognize symptoms of autism and treat autistic children appropriately. Education will make it easier to resolve difficult situations that emerge when an autistic child or young adult is overwhelmed by his environment.

Randall, who is based in Etna, was in Mt. Lebanon last month at the invitation of the Mt. Lebanon Police Department. Lt. Dick Staaf of the MLPD’s patrol unit heard her presentation to representatives from 60 municipalities at the Allegheny County 911 Emergency Management Center in Point Breeze. He recommended that all of Mt. Lebanon’s officers receive training on “Autism and Emergency Situations,” as the course is called.

There are many situations where a police officer might encounter a child or young adult with autism, but several scenarios are key. Most critical is the autistic child who wanders away from home—not because he is running from something but because he is drawn to whatever he is fixated on. When a typical child gets lost, it may be because he is angry or he simply forgot to “stay in the yard.” Police check the house, then fan out around the area, talking with friends and neighbors and looking for tips. He’ll likely be found at a friend’s, the playground or even hiding in his own house. When an autistic child wanders, however, it is because he is in search of what fascinates him, so it is important for police to talk to his caregivers immediately to find out what the child is fixated on. If it is trolleys, they can go immediately to the nearest T tracks or station. If it is water, they should check swimming pools or creeks in the area immediately, saving valuable time and possibly a life.

Another common situation where police officers may encounter a child (or more likely a young adult) with autism is in response to a “domestic” call for help. “It is not uncommon for parents of [autistic] young adults to have to call the police when the behavior gets ‘too big.” Says Randall, “especially when the child has no communication skills.”

“Most people really want to help but they just don’t know where to start,” Randall says.

The call could be in response to an older child having an uncontrollable temper tantrum that might harm him or others, or it could be because an upset 160-pound teen has decided to sit and rock in the driveway—forever. In either case, officers will have a better outcome if they remember that autistic people think literally. If an officer says, “You cannot sit in the driveway all night,” the autistic person will think, “OK, I can sit on the curb.” Better for the officer to say something like, “You need to go back into the house and sit in the kitchen.”

With luck, the person with autism will respond, but officers also need to remember that “an autistic meltdown” is neurologic, causing vision and sound to blur, Randall says. When confronted, the autistic person may display fight or flight reactions; have a total emotional shutdown; start rocking, pacing and crying; or curl up in a ball.

What then? The main thing a police officer—or anyone who wants to help—can do is to remain calm. Threatening, shouting or coercing the person in crisis is less likely to resolve the situation than creating a soothing environment, removing extraneous people from the scene and perhaps offering a wrap—a blanket, a sweatshirt or a sleeping bag—that can provide calming pressure.

Early intervention is making a difference, Randall says, and although an autistic person continues to learn all his life, by the time he reaches 25 or so, it is likely his nervous system will have calmed down a bit and he will have learned some coping behaviors. Still, living alone can be a challenge for an autistic adult, Randall says, as neighbors find some of his behaviors strange or annoying and call 911. Once again, a behavior assessment and appropriate approach from a police officer could go a long way toward resolving the problem.

Randall is pleased that awareness of autism as a neurological disorder is growing, so much so that the Pittsburgh Cultural Trust presented a special performance of “The Lion King” September for 400 children with autism and their families. In deference to the children’s hypersensitivity, they modified the production, doing things such as keeping the lights low, eliminating strobes and turning down the thunder.

Mt. Lebanon Deputy Police Chief Mike Gallagher suggests that one way families or caregivers can help people who have a tendency to wander because of autism, mental retardation, mental health challenges or dementia is by filling out the Pennsylvania Premise Alert form. The form, which also is useful for people with physical disabilities, is used to provide a physical description of the child or adult, indicate the diagnosis, describe habits and behaviors and provide contact information for family members or caregivers (This is particularly important in the case of young adults and adults who may be unsupervised or even live alone.) The caregiver completing the form can note where a person who wanders is most likely to be found and in the case of a nonverbal person can indicate the preferred method of communication (pictures, sign language, written words, etc.), as well as favorite toys and subjects of discussion, and likes and dislikes.

“The more background information we have about any call, the better we’re able to serve our residents,” says Lt. Staaf. 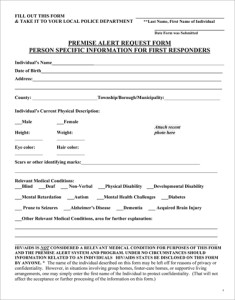 Anyone can download the Pennsylvania Premise Alert Form at papremisealert.com/images/form.pdf, and bring it to the Mt. Lebanon Police Department, 555 Washington Road. Mt. Lebanon will see that the information is entered into the Allegheny County 911 database that police, fire or emergency dispatch crews have access to via computer en route to calls. Taking behavioral or health issues into consideration as they head for the scene can help police and other first responders plan accordingly and improve the possibility of a positive outcome.

Gallagher encourages everyone who can benefit from it to fill out the form. “We’ve always been able to add alerts into Allegheny County 911,” he says, “but the problem is that not everyone in the community is aware of that.

For more information about Autism Connection, visit www.autismofpa.org or contact the group at 412-781-4116 or support@autismofpa.org