Leo McCafferty has great hands—for performing plastic surgery and playing his guitars, some of which were owned by famous musicians.

An architect, a surgeon, an illustrator and a pharmacist walk into a hair salon… well, not really, but if they did, they’d talk shop despite their disparate vocations. These charismatic men, all in their fifties, share a love of music and the joie de vivre to embrace it. They hang up the tools of their trades after work and play instruments of one type or another. With Mt. Lebanon’s nationally recognized school district music program, it’s probably no coincidence that many professionals (and parents) moonlight through music. Joe Ravita, owner of Empire Music on Washington Road, which teaches 500 music lessons a week, sums it up: “It isn’t surprising that adults embrace music in a community where education and the arts are so important. Plus, a lot of these guys played when they were young, so they return to it.”

Dr. Leo McCafferty always loved music. When he was growing up, the sound of his grandfather’s violin wafted from their home at the corner of North Meadowcroft Avenue and Colonial Drive. His grandmother played Carnegie Hall. Years later, his daughter Kelly blew away the morning crew of WDVE radio as an intern, performing live on her guitar. McCafferty, Osage Road, played a variety of instruments in high school and college but was focused on becoming a plastic surgeon.

As with many, his life changed on September 11, 2001. “I was in the middle of a surgery when the word came in. The whole hospital shut down, and I was part of a team of doctors on call waiting to serve any survivors of Flight 93. Of course, he eventually learned there was nothing he could do, so for the first time in his career, he had a free afternoon. Under these terrible circumstances, he needed a distraction, so on impulse he walked into Empire Music and bought a guitar. At first he took lessons from his friend, musician Frank Cappelli. Together they formed a little group, The Monongahela Duck Club Band. But it was the intricacy and unique structure of the instrument, more than the playing, that fascinated McCafferty.

As his involvement with other musicians grew, he started to notice the guitars people played. “I had a nylon classical guitar. Others played Martins, Taylors. I started to get fascinated with the woods and strings and learned that collecting guitars is a whole subculture.” His passion is for signature guitars such as those created for legendary musicians like BB King, Elvis, Johnny Cash and Eric Clapton. Over 12 years he has amassed 59, ranging in value from $5,000 to $20,000. Some are priceless in terms of his admiration for the artist for whom they were made. “Paul McCartney is the most important to me,” he says. “A custom guitar really reflects the man, and in his case, he’s lived an admirable life.”

McCafferty, who recently was featured in Guitar Aficionado, compares caring for a guitar to performing surgery. Like the precision required in an operating room, guitars too need special attention. He learned this the hard way, after a Martin guitar he had on display cracked from fluctuating temperatures in his living room. He now houses his collection in a humidity-controlled room in the basement.

Researching and acquiring the instruments has become something of an obsession for McCafferty, who confides he has GAS (guitar acquisition syndrome). Will he ever seek treatment? Laughs McCafferty, “Absolutely not! It’s a real joy.”

Structure and beauty are keys to any architect’s sensibility. Joel Cluskey, president of RSH Architects, focuses mostly on restoration and renovation projects such as his current work with the Mt. Lebanon Historical Society, which wants to acquire and restore the once-magnificent Spanish-style McMillan House on the corner of Washington Road and Lebanon Avenue. So it isn’t much of a stretch to see why Cluskey loves collecting and restoring vintage player pianos.

The architect spends 15-20 hours a week in his basement workshop on Fruithurst Drive cobbling together complicated, miniscule parts to bring to life their Escheresque guts. He has so many work orders from people across the country that the avocation has become more like a second job.

Cluskey has four player instruments—two uprights, a grand piano and a reed organ. His interest in them was sparked about 16 years ago, almost by accident. He’d always loved music and had admired his neighbor’s 1926 Kelsworth player piano. When she wanted to get rid of it for a couple hundred bucks, he happily bought it and restored it over the next two years. As with most engrossing hobbies, it grew from there. As important as acquiring the pianos is securing the paper rolls of music needed to bring the pianos alive. The delicately perforated sheets are stored in long, narrow boxes that line the walls of several rooms. Marked on the end faces of the boxes are the names of the compositions, reminders of time gone by as much as the instruments themselves. The Pennsylvania Polka, classical compositions by Ravel, Chopin and Rachmaninoff and hundreds of other scores roll over the mechanism gently pushed by a system of air and whisper-soft reeds.

Cluskey thinks the connection between his day job and his very serious hobby (he is president of the Piano Tuners Guild and has been featured in the Automatic Musical Instrument Collectors Association magazine) is obvious. “Its relation to what I do is the creativity and aesthetic involved. Restoring these pianos is akin to repurposing and bringing back to life historic buildings. That interests me,” he says.

Ron LoVerde, 55, played trumpet in high school and performed in competitive drum corps. He majored in music at Duquesne University with the goal of becoming a high school band director. But after realizing the slim possibility of finding a job, he left shy of graduation and instead learned the beauty trade and opened his own salon, La Verde & Co on Castle Shannon Boulevard. Thirteen years ago, as his kids were getting more independent, he felt music calling him back. With the salon thriving, it was time. As luck would have it, an old friend was having the same thought. Could they start a band? The rest fell into place like a delicious riff. Standing in line at Kennywood, LoVerde bumped into a high school friend who had a couple guys also looking to play again. Thus Uptown Rhythm and Brass Band was formed. The nine members play horns, drums, guitar, bass and keyboard.

The soft-spoken LoVerde sings lead and plays trumpet. He thrives on the band’s growing popularity and regular performing schedule—they recently played for 16,000 people at a benefit. His meticulous approach to creating beautiful hair is similar to how he approaches music. “I respect the nomenclature of music,” he says. [When I was studying], we had to know the different instruments, the music. Today everyone wants to just blast rock and roll without exploring other types of music, or in some cases training. They sometimes don’t understand the depth that is out there.”

LoVerde is as passionate about the role of music in education as he is about his playing. He and his wife, Lisa, a teacher at Lincoln Elementary School, have four children, all musical. Daughter Bianca, now a physician, played in the band at Penn State. “My daughter has traveled the country because of her involvement in band. Places she would have never gone,” LoVerde says. Sons Garrett, Ian and Christian (now the only one at home) all play instruments, and their dad is active in Band Builders, the Blue Devil Band support group.

LoVerde is nearly evangelical about the importance of learning an instrument. “You can use this skill your whole life,” he says, expressing regret that teens have to choose among various activities and as a result often drop out of band.

For LoVerde, the social aspect runs deep, too. He just can’t think of a better way to spend free time after he hangs up his scissors.
If you have small children, you may know Stacy Innerst’s work. A nationally award-winning children’s book illustrator, Innerst has created little worlds for books like Lincoln Tells a Joke or  The Worm Family. But if you’ve read M is for Music to your little ones, you also struck his chord for music. His latest book, The Beatles Were Fab (and They Were Funny) further illustrates (literally) his love.

Innerst, Lakemont Drive, always played various instruments, but in college he had to choose between art and music. Choosing the former did not negate the latter. He moved here from New Mexico and quickly connected with a group of like-minded friends. “All of my best friends play music, and we have a place to practice and the freedom to make it happen. This is all the stuff I wanted when I was younger, but didn’t have.” A wicked drummer, Innerst plays in three bands—The Tumblers, Crop Dusters and Mon Gumbo. While it might be hard to imagine traversing the delicacy and precision of hand illustration to letting loose on the drums, it’s really not, says Innerst. “I think music and art are two parts of the same whole. I am inspired by sound and the visual at the same time.” A bonus to performing is that unlike drawing, which is a very solo process, he gets to create with other people. Because his bandmates are his closest friends, he gets to spend time with them and communicate through the music. He says, “I’d actually rather bond through playing together than any other form of communication. There is nothing like it.

Pharmacist Bill Riley of Lebanon Shops Pharmacy simply loves to play music. Add to that his Beatles fanaticism, and it’s a drum solo waiting to explode. Unlike the connections made between an architect building structures and pianos, or an illustrator creating music, Riley’s interest seems organic: “I totally dig music. I’ve played music my whole life,” he says. 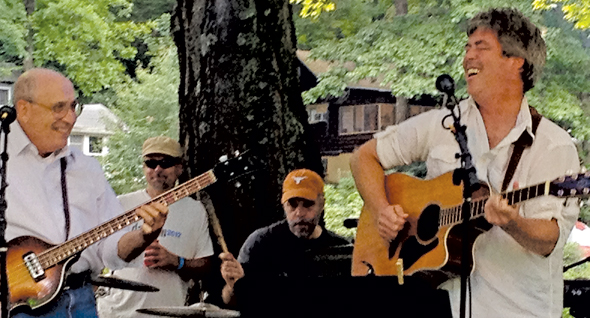 When he was 7, he remembers his babysitter bringing over her 45s and playing music all night. “I was probably the only 7-year-old who loved the B sides. ‘I am the Walrus’ was a favorite. Imagine a kid that age loving that! My parents thought it was hilarious.” A self-proclaimed Beatle aficionado, Riley owns every album, 45, CD, 8 track, cassette and outtake of the band. His kids know all of their songs too. Oh and the happy obsession wouldn’t be complete without him playing in a Beatles tribute band for the last 12 years.

At 53, his boyish enthusiasm for the group is contagious. This enthusiasm inspired his buddies, all of whom played for other bands. In a moment of musical clarity, they decided to amplify their playing by forming their own band, The Tumblers, playing their own original music. The Tumblers now play all over town (including the recent Plein Air Mt. Lebanon art festival). “When I graduated pharmacy school, me and my dad and brother opened the pharmacy.” Riley says. [Pharmacy] “is what I do, but my passion is music. Writing songs and playing just comes easy to me. I do it because I love it.”

Like the music they play or the instruments they love, these men apply their natural talents to both their vocations and avocations. It just may be the perfect melody for midlife.