On a frosty Monday morning, the children at St. Bernard School gathered in an art room, eagerly waiting to pick from the piles of colorful blankets stacked in front of them. More than 160 students, from kindergarten to eighth grade, took a break from their classes to tie knots around the border of almost 90 blankets.

The knots formed decorative fringes on the blankets the children were donating to the Allegheny County chapter of Project Linus, a national organization that collects blankets to give to sick and needy children.

A group of about 20 fourth graders was the first to work on the blankets that morning. The kids gathered at tables in groups of mostly four or five to get to work. Six boys scrambled to one table to call dibs on a blanket with a Pittsburgh Penguins logo.

Lewis Kicinski specifically picked the Penguins pattern with his mom for the project. After he and his buddies finished their knots and carefully inspected the border to make sure they didn’t miss any frays, Lewis rushed to the stack of blankets to grab a bacon-patterned blanket he had his eye on. He was excited about the blankets but bashful when talking about his and his classmates’ good deeds that day. 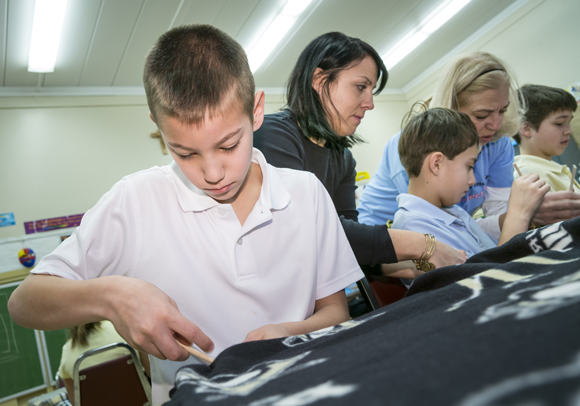 The students collected the money to pay for the blankets from a dress down day, when they paid $2 to trade in their school uniforms for casual wear.

Kicinski, Broadmoor Avenue, says the students raised almost $400 to purchase the blankets and even had enough left to donate nearly $200 to Project Linus along with the blankets. “I wanted them to work on something hands-on that they’ll give to someone else,” she says. “I wanted the children to realize that giving their time means much more than just handing over some money.”

Rachel Kepperling, McNeilly Road, a mother of three and a volunteer at the school, says this project was really important to the children: “They put their own money into it, they’re putting their work into it and they know the blankets are going to people who need them.”

Two friends, Kate Boraza and Kay Nerone, sat at a table together, knotting a pink blanket. “These might make people feel better and warmer in the winter,” Kay says.

Kate agrees. “If you don’t have a lot of things, you might feel sad and lonely. This lets them know people care”