LOCK IT UP Winter winds keep most people inside where it’s warm and cozy. Everyone, that is, except burglars. This winter, keep the doors to your house and car locked. Burglaries and thefts from cars increase in the winter months when people tend to stay inside. During the first cold snap this fall, there were three reported home burglaries in the Lincoln School area. In each case, the thieves gained access to the goods through unlocked doors and windows.

S.A.F.E. LEBO DRUG DROP This fall, S.A.F.E. (Stop Addiction For Everyone) Lebo—a coalition that aims to combat prescription drug abuse—oversaw the installation of a secure drug drop-off box in the lower lobby of the Public Safety Building at 555 Washington Road. PA American Water paid for the box with a goal of  keeping the drugs from being flushed down the toilet and polluting the water supply. The box  is accessible 24/7, and can be used to deposit any unwanted, unused or expired medications.

Police Chief Coleman McDonough reports that the public is making good use of the box, but would like to remind residents not to put in used needles (even ones with caps on them).  Ask your pharmacist or doctor for a disposal container for sharp objects. St. Clair Hospital has a needle disposal program where you can exchange containers of contaminated needles for new empty containers. Check the hospital’s  Environmental Services Department for more information.

Please remember that the d 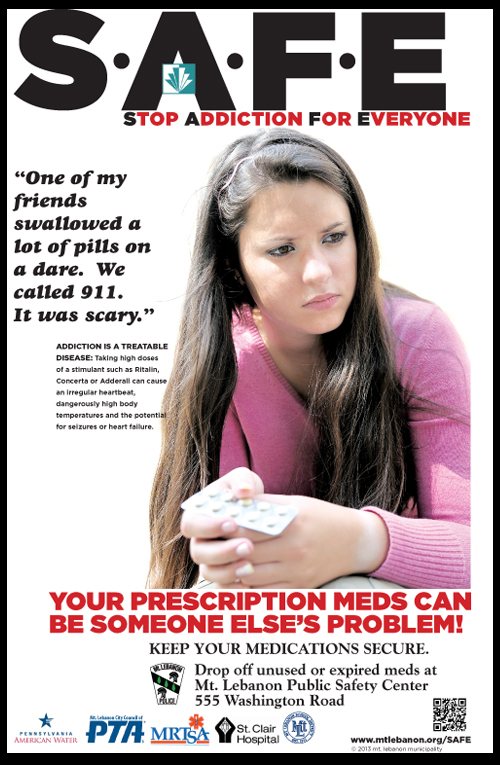 rop box is in the public safety building, next to the cemetery, not in the municipal building.

S.A.F.E. Lebo comprises representatives from the municipality, school district, Mt. Lebanon Council of PTAs, Medical Rescue Team South, St. Clair Hospital, Mt. Lebanon Police Department, Outreach, rehab facilities, faith communities and private counselors.  The group hopes that if people get rid of their prescription drugs as soon as they are no longer needed, it will decrease opioid abuse and prevent the drugs from being stolen. Find more information and links to important community resources at www.mtlebanon.org/SAFE.

SOFTWARE A SUCCESS Earlier this year, the police department outfitted four patrol cars with Traffic and Criminal Software (TraCS), a system that uses scanners to automatically fill out citations and other reports. The system has proved successful enough that the scanners and printers will be installed in four more patrol cars now, and eventually in  all 14 patrol cars.

Without the software, police officers have to write citations by hand, a lengthy process that is extended if there is more than one violation—speeding and not wearing a seatbelt, for instance. With the software, a police officer needs only to scan a license and registration once and then fill in the violation—a bad plate, expired inspe 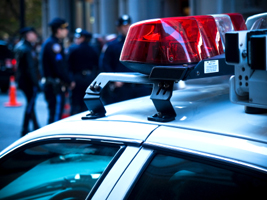 ction sticker, running a red light—on each citation. Pennsylvania State Police have been using TraCS for a few years with great success.

Last year, the North Central Highway Safety Network, in partnership with the Pennsylvania State Police, selected Mt. Lebanon as one of three departments in western Pennsylvania to pilot an e-citation program. A state grant covered the cost of software; Mt. Lebanon purchased the original four bar code scanners and printers and will cover the cost of the four additional ones to be added by the end of the year.

The TraCS software is also used to complete crash reports. “We can clear scenes faster now since there is no handwriting involved in the report,” says Lieutenant Aaron Lauth.  At a crash scene, the officer can scan information from everyone involved and the system will automatically populate the report.  The crash reports then are sent to PennDOT, which uses crash information to determine where there are dangerous roads and intersections. 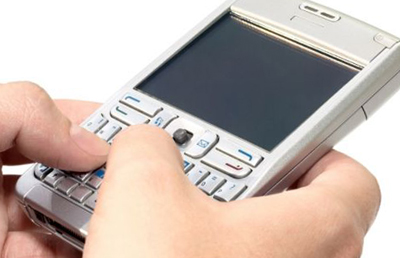 HERE’S A TIP If you see crime happening or something seems wrong, but you want to remain anonymous, try tip411. Using your cell phone, type the letters MLPDTIPS plus your tip in the text message area and send it to 847411. All sender information will be stripped out of your text so it will be completely anonymous. The upside to this method is that while your name and contact information is hidden from the police, an officer will be able to respond and ask a question or verify information. “It makes our work easier and enhances services for residents,” says Lt. Aaron Lauth. Please use tip411 for tips only; for emergencies, call 911. Anonymous tips also can be sent to the police department through a form on its website, pd.mtlebanon.org/see-crime-text-it-anonymously.