You may have noticed an armored vehicle on Mt. Lebanon’s streets and wondered if the police department was planning to occupy a nearby hamlet. Such vehicles have come under public scrutiny, especially given President Obama’s recent cancellation of the federal government’s ability to give away certain types of military equipment to local police departments, lest residents feel threatened or concerned that they are under attack.

The vehicle you may have seen in Mt. Lebanon is called a TRV—a tactical rescue vehicle, obtained in 2012 at no charge when it was discarded as surplus by the Pennsylvania State Police.

The vehicle, which has no weapons or tank-like tracks, actually belongs to the South Hills Area Council of Governments’ Critical Response Team and is used by SHACOG’s 21 member communities to assist more than 330,000 residents in specific situations, such as apprehending a barricaded suspect or transporting police into a dangerous area to rescue someone.

It is not subject to Obama’s ruling, since it is neither armed nor tracked. The police department actually refers to it as “a bulletproof vest that rolls.” Former Police Chief Coleman McDonough also noted it protects more than just police, as they may have to enter an area to rescue civilians under fire.

OFFICER CANDIDATES The department now has a new list of candidates eligible to become police officers in Mt. Lebanon. This spring, the department gave the entrance level exam to 138 applicants. After initial processing and a fitness test, 80 candidates took the written test and the top 25 were invited back for an oral exam. The top scorers on that list, after veterans’ preference was considered, make up the eligibility list. With several officers recently promoted and others near retirement, the list will be used for the next year any time the department needs to hire someone. The list can be renewed for a second year.

Lt. Mike McMurtrie is the police department’s new supervisor of field training. McMurtrie will coordinate the schedules of all new hires as they train with experienced officers. He also will review all the officers’ daily, weekly and monthly reports to determine when the trainees are ready to move into the next phase of learning. “In my opinion, this position, supported by the field training officers, is the most important of the department because you’re setting up the future of the patrol officers and leaders for this department,” Deputy Chief Mike Gallagher says. 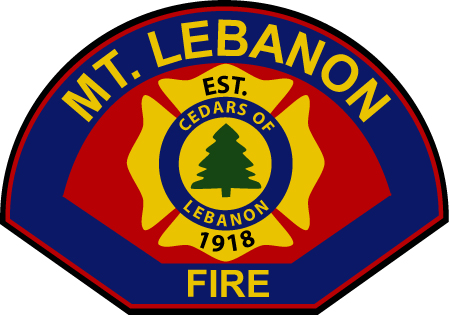 NEW RULES FOR FIRE VOLUNTEERS Mt. Lebanon Fire Department has made a change to its residency requirements for volunteers. In the past, all volunteers, like all career firefighters, were required to live in Mt. Lebanon. But often the department lost its hefty investment in training—a minimum of 166 hours is required for basic Firefighter I certification, and it could take years to complete the courses and acquire the skills to reach the Firefighter II level—when a volunteer moved just a few miles away to another community.

The Mt. Lebanon Commission enacted an ordinance that now allows some volunteers—a maximum of six at a time—to retain their membership if they move away, provided they meet a few conditions: They have to have been a member of the department for at least two years; must hold Firefighter II certification; cannot live more than 12 air miles from the Mt. Lebanon Public Safety Building; and must continue to meet all of the department’s call and drill attendance requirements.

State law limits the number of active members of a volunteer fire department to 50. Currently, Mt. Lebanon has 36 active volunteers.