FIREARM SAFETY In November, Mt. Lebanon Magazine blogger Lisa Goldstein wrote an incisive post on gun safety, “The Question No One Wants to Ask,” (www.lebomag.com/25539/the-question-no-one-wants-to-ask/). The post generated enough interest among parents of young children that police chief Aaron Lauth was asked by representatives of the Mt. Lebanon PTA to write a column for each school’s newsletter. His column is below.

Here’s the scenario…you schedule a play date for after school with your child’s classmate. You’ve asked their classmate’s parent the tough questions…“what time should I come pick them up?”… “should I send a snack?”…maybe even, “do you have an extra car seat so my child is safe and secure on the drive to your house?” Have you ever considered asking the parent if they have any unsecured firearms in their home?  It’s not a question that is regularly thought of or one that is always easy to ask.  Consider the following information and decide for yourself if this is an important question to consider asking.

With an estimated 270 million civilian-owned firearms in the U.S.—nearly one for every man, woman, and child—the odds are good that there’s a gun (if not several) located someplace where your child spends time. If that fact doesn’t give you pause, this one will: A study published in Pediatrics found that nearly 1.7 million children under age 18 live with a loaded and unsecured gun in the house. It could be on a closet shelf in a drawer, or under a mattress—where a child can easily reach it. Yet few parents raise the issue of firearms before letting their kids play at someone else’s home. “Most parents who own guns are responsible about keeping them locked, unloaded and stowed away safely,” says Beth Ebel, M.D., a member of the American Academy of Pediatrics’ Council on Injury, Violence and Poison Prevention. “Yet nearly 40 percent of gun-owning households with children have an unlocked gun to which a child might gain access.”

Since 1988, the National Rifle Association’s Eddie Eagle Gunsafe Program has been promoting firearm safety in schools and youth groups as well as through law enforcement agencies. Its main points: If you see a gun, 1. Stop. 2. Don’t touch. 3. Leave the area. 4. Tell an adult. MLPD crime prevention officers teach kids these key points during some of their safety lessons in the elementary schools throughout the district.

Unfortunately, research shows that most kids can’t resist the lure of handling a gun, even after they’ve been warned repeatedly not to do so. “Children can recite what to do if they find a gun and still do the wrong thing when it counts,” says Raymond Miltenberger, Ph.D., professor of applied behavior analysis at the University of South Florida, in Tampa. As proof, he cites his studies published in Pediatrics, which showed that 4- and 5-year-olds who participated in verbal safety training didn’t follow the correct procedure when they were left alone in a room containing a gun.

When scheduling that next play date, please consider asking about unsecured firearms.  It could save your child’s life.
Some additional resources on the topic can be found at the following links:

POLICE BODY CAMERAS are in limited use in Pennsylvania, but that could change if legislators amend the state’s wiretap and Right to Know laws. 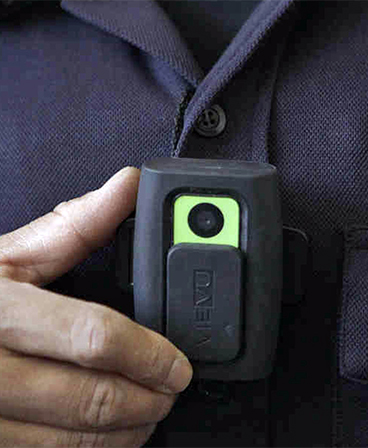 “I think body cameras could be great tools if we could change some current restrictive legislation,” says Police Chief Aaron Lauth. “We have had in-car cameras for several years, and the vast majority of the time, if there’s a question, the footage exonerates our officers.”

As the wiretap law now stands, someone’s reasonable expectation of privacy prohibits the use of a recording device inside their home without permission. This means that when dispatched on a call, the officer must remember to deactivate the body camera before entering a home, and reactivate it upon leaving—one more thing to keep track of in a sometimes rapidly changing situation. Failure to do so could leave the department, and the officer, open to civil liability and even criminal charges.

If the Right to Know requirements were clarified, and some kind of exemption for emergency services body cameras were built into the wiretap laws, Lauth would welcome the use of body cameras.

“They would be very valuable,” he says. “We would have a lot more hardcore evidence.”