EYES ON THE ROAD Mt. Lebanon Police want you to see how much distractions can affect your driving. So they’ve arranged for Allstate to present Reality Rides, a distracted driving simulator, in the South metered parking lot (across from Washington School) on Friday, August 4, as part of First Friday.

The simulator puts you behind the steering wheel of a real vehicle that remains stationary and is hooked up to an LED curved monitor on the windshield. You then attempt to “drive” the simulator while texting, talking on the phone and entering navigation directions. Try it; it’s free.

Moses received the award because of his outstanding ability to interact with students, says Rick Hilinski, assistant director of the institute. “John adapts his style of teaching to the students to ensure that they learn.” Students, other instructors, public safety providers, managers and past awardees are eligible to nominate finalists for the award.

Moses has taught at CCAC since 2002 and is the lead instructor in its Basic EMT class. 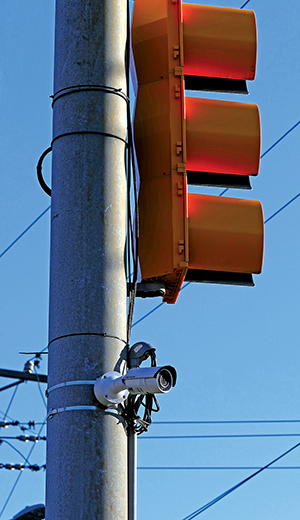 Cameras are already operating at the intersection of Washington and Connor/Gilkeson roads and at the intersection of Mt. Lebanon and Castle Shannon boulevards. The cameras have picked up everything from license plate numbers of suspected shoplifters to car/pedestrian accidents. Police do not monitor the cameras live but they are able to retrieve recorded footage.

CRIME TRACKER The Mt. Lebanon Police are launching a new interactive community crime map, which is tied to our Tips 411 app. Here’s how it works: Weekly police reports go into a spreadsheet, which is pulled into mapping software. You can go to www.communitycrimemap.com, select Mt. Lebanon in the drop-down menu, and then sort the crime by many details, such as type of crime or time of day. The crime reports will be mapped for you. When you click on one, you will have the option to send an anonymous tip about the event directly to Mt. Lebanon police without any information to identify you.

Look Up Lebo Remember to wear bright, reflective or illuminated clothing while out walking, especially near dusk or dawn. Even if it’s just a short walk with the dog on a side street, drivers need to see you.