SCHOOL RESOURCE OFFICERS Beginning in early April, Mt. Lebanon Police Corporal Mike Smakosz and Officer Scott Kunz of the Crime Prevention Unit began sharing responsibilities in the capacity of school resource officer (SRO) at Mt. Lebanon High School. This upgraded security measure is intended to allow the police department and the school district to better identify potential safety/security issues as well as ensure quicker responses to any type of emergency during the school day.  One of the two will always be at the high school between 7:30 a.m. and 3:30 p.m.

Smakosz and Kunz previously completed basic training to serve as SROs. The crime prevention officers teach dozens of programs in the district each year. Smakosz and Kunz were a logical interim choice, as they are familiar with school policies and procedures in addition to being well-known among the faculty, staff, and students.  Although this move required some schedule adjustments, they will continue to teach safety and security classes in all the schools.

“Their role is to provide an officer presence while continuing to address school safety and security,” says Deputy Chief Mike Gallagher. He adds that routine discipline and policy violations will not be police matters: “The school will not involve the resource officers in an incident unless it is something that would require calling 911 anyway.”

KEEPING STUDENTS SAFE Police have long been telling people, “If you see or hear something suspicious, say something.” Now Mt. Lebanon School district’s students, parents, faculty and staff have an easy way to do that. In partnership with Mt. Lebanon Police Department, the school district is offering a free app called MTLSD Student Protect that allows anyone to share information anonymously using a smartphone.

MTLSD Student Protect not only takes anonymous tips and routes them to school administration and police, but it also provides an easy way to summon help. In an emergency, a user can activate a button that initiates a 911 call that also sends their exact GPS location.

Concerned people can send tips under a variety of categories, including: threats, bullying, firearms or weapons and suspicious activities. The app is similar to the municipality’s TIP411 app, which encodes tipsters’ information so they can remain anonymous. However, with MTLSD Student Protect, the tipster can choose to include contact information for follow-up.

The app also receives alerts and bulletins. Incidents are listed chronologically or by distance from the user.

The MTLSD Student Protect app (and the municipality’s TIP411 app) are available at Google Play and the App Store. More information on Student Protect is online at mtlsd.org.

CAPTION: Students, teachers, parents or staff at Mt. Lebanon School District can report suspicious activity by using the new free app at left.  Download it at Google Play or the App Store. 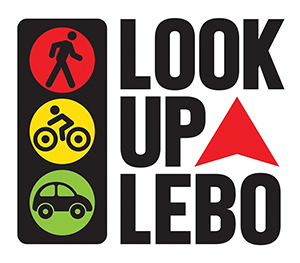 When you’re a pedestrian, make sure you behave as drivers expect. Be predictable and make eye contact with drivers to be sure you’re seen. And remember—the shortest distance is not always the safest distance. Plan your route, and be careful.

A new piece of equipment on the belt of Mt. Lebanon police officers could save their lives—or yours. As part of increased efforts to save lives through the proper use of tourniquets, police will now be able to carry a tourniquet pouch everywhere they go. The pouch includes one single-use tourniquet that can be used to stop bleeding on a limb. Police undergo annual CPR and first aid training and this year just completed a refresher round of Stop the Bleed training, led by Medical Rescue Team South Authority.

DON’T PLAY WITH FIRE Fire is our friend, but it’s one friend you don’t want to play with. If you’ve been waiting all winter to fire up the grill, the chiminea or any other outside flames, Mt. Lebanon Fire Department wants to remind you of the Allegheny County recreational fire regulations:

· The fuel area must be three feet or less in diameter and two feet or less in height. The fire must be 25 feet away from buildings and anything that could catch on fire.

· Don’t burn trash or yard waste. Don’t burn if the winds are high or if it’s been extremely dry. The fire could spread. Attend the fire until it is completely out and make sure you have a way to quickly put out the fire, such as a garden hose, fire extinguisher or dirt/sand.

· Don’t use a grill on a covered porch or closer than 10 feet to a building. Every year, the fire department responds to at least six grill-related fires.

· The rules are the same for chimineas and portable fire places and fire pits. Use it according to the manufacturer’s recommendations and do not overload it.

100 YEARS Mt. Lebanon Fire Department celebrates its 100th anniversary this year, so we’re taking a monthly glimpse of fire fighting through the decades.

The volunteers also wanted an ordinance to prohibit burning of paper and rubbish in vacant lots after sundown, as this had started brush fires.

1941 The municipal manager approved that windshields be installed on the Seagrave and Pirsch fire truck. The Mt.  Lebanon Dormont Civilian Defense Council was formed. This group organized auxiliary firefighters and rescue squad members in the two municipalities.

1948 Chief James Wood and Capt. David Hasley were dismissed  after being brought up on charges that they and others in the department drank intoxicating liquor after a fire at 30 Midway Road. The resident of the house that was on fire had provided the liquor. Asst. Chief Ray Goettel was appointed chief. He was Mt. Lebanon’s longest serving fire chief, holding the position until 1972.

1949 The department bought a 1949 Chevy Panel Truck and equipped it with a 250-gallon tank and 250 gallon-per-minute pump. The large pumpers could not fit into some of the streets and parking lots. This vehicle could fit into the alleys for vehicle and garbage fires, eliminating the need to call out all the volunteers. This piece of apparatus was nicknamed “The Bug.”

There are a few ideas as to where the name came from.  One is the Chief’s Buggy, reminiscent of horse-drawn years, and the other was that it looked like a bug.