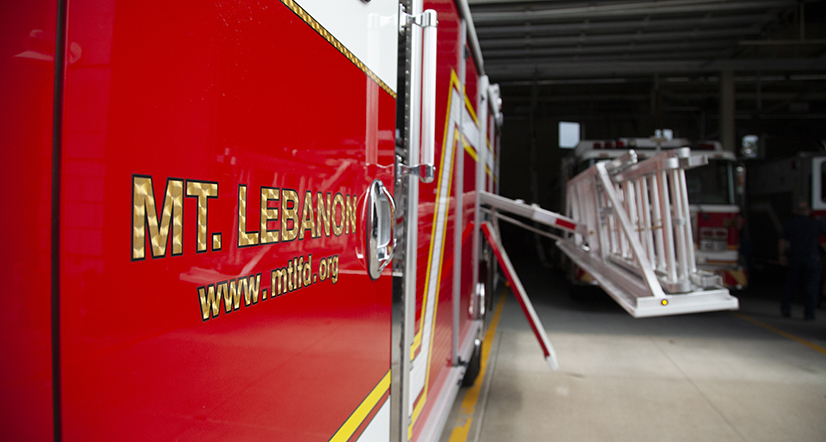 OPEN (FIRE) HOUSE The new fire truck is here! Hang out with the new Engine 3, meet Mt. Lebanon firefighters and learn about the department’s 100th anniversary at the fire department open house on Saturday, October 6, from 11 a.m. to 3 p.m. Check out the history displays, tour the facility and feast on hot dogs and cake. Kids will love the activities: fire hose spraying, turnout gear dress-up and a junior firefighter obstacle course. It all culminates in the “pushing in” of  Engine 3 at 2 p.m. (Firefighters traditionally welcome a new engine by pushing it into the garage bay). Bring your camera or charge your cellphone. It’s a great photo op.

Haberman is a former lieutenant in the Port Authority of Allegheny County Police Department, where he has worked for the past 14 years. He has also served with the Wilkinsburg and Edgewood police departments. Haberman, a graduate of La Roche College with a degree in Criminal Justice and the FBI National Academy, lives in Moon Township with his wife and three children.

He was selected from a field of 14 candidates, six of whom underwent a selection process that included a writing exercise, a structured interview, a scenario exercise and psychological testing.

“I’m confident that Jason will do an outstanding job and will continue the long tradition of professionalism in policing that the MLPD is known for,” says Police Chief Aaron Lauth.

BE SAFE Look Listen and Learn. Be Aware. Fire can happen anywhere. That may be a long theme, but it’s a good one to commemorate this year’s National Fire Protection Association Fire Prevention Week, October 7 to 13. Get tips, watch videos and play interactive games with the kids online at www.nfpa.org/fpw/index.html

FACEBOOK HIM, DANNO We love our social media. The Mt. Lebanon police, fire and magazine all have pages and we’d love it if you followed each one. But there’s one thing we need you to remember: if you need to report something to police or talk to an officer, you have to call 911, even if it’s minor. None of our pages are monitored 24 hours a day, 7 days a week. Officers often get busy on calls and may not see posts or messages for hours. 911 will triage your call, so if it’s something that can wait, they will prioritize. But they will make sure an officer responds appropriately. Thanks for understanding.

Mt. Lebanon Fire Department is celebrating its centennial this year. In tribute, each month we’re offering a glimpse of local firefighting through the decades, featuring pictures and information from the municipal archives.

1980 An ad hoc committee was appointed to look into moving the fire department out of the cramped municipal building, possibly to the corner of Beadling and Washington roads or onto Bower Hill Road. The Mt. Lebanon Commission tabled the discussion. In 2003 the fire and police departments moved into the newly constructed Public Safety Center at 555 Washington Road.

In the 1980s the department started training for hazardous materials incidents and was instrumental in developing the South Hills Specialized Intervention Team. That team is now part of the Allegheny County Hazardous Materials Team.

MRTSA: JOIN NOW What if we told you we could guarantee you or anyone living in your home—or visiting it, for that matter—wouldn’t pay a cent for ambulance transport?  All you have to do is become a member of Medical Rescue Team South Authority, the expert agency that handles all of Mt. Lebanon’s EMS calls. MRTSA answers more than 10,000 calls each year. But if you have a deductible, you could end up paying a lot for treatment and a ride to the hospital. MRTSA submits all insurance claims for you.

You have two membership options: $47 for an individual (covers only the person named in the membership) or a $75 household membership, which covers everyone living in or visiting the home. For more information, go to MRTSA’s website at MRTSA.com or call 412-343-5111.

STOP THE BLEED Bleeding to death is a real concern, whether it’s from an accident, attacks or other mishaps. And just like many people have learned CPR, it’s possible to learn to Stop the Bleed through classes at MRTSA. The agency is offering free classes at its headquarters, 315 Cypress Way. It’s simple and anyone can learn. Approximately 40 percent of trauma-related deaths worldwide are caused by bleeding or its consequences, making hemorrhage the most common cause of preventable deaths in trauma, MRTSA says. For more info, go to www.mrtsa.com/education.