IMPAIRED DRIVING Just because you aren’t drunk doesn’t mean you are legal—or safe—to drive. Although alcohol arrests are down, Mt. Lebanon police say they’re seeing an uptick in the number of people getting DUIs for controlled substances, some of which have been prescribed. Remember that even if you are taking a legal medication such as medical marijuana or prescription painkillers, you must be able to safely operate a vehicle in order to drive.

Pennsylvania is an implied consent state, which means if you drive, you agree to breath, blood and urine tests, if police have reasonable suspicion that you are impaired. How do police know? Some of our officers are trained to be drug recognition experts.

They are called to the scene to provide a battery of tests to determine if a person is under the influence. They are so well trained, they often can tell what type of drug the person is on by the results of the evaluation. Once the suspicion is documented, the suspect moves on to the medical-grade test. And it’s all downhill from there. Bottom line: take an Uber or Lyft! 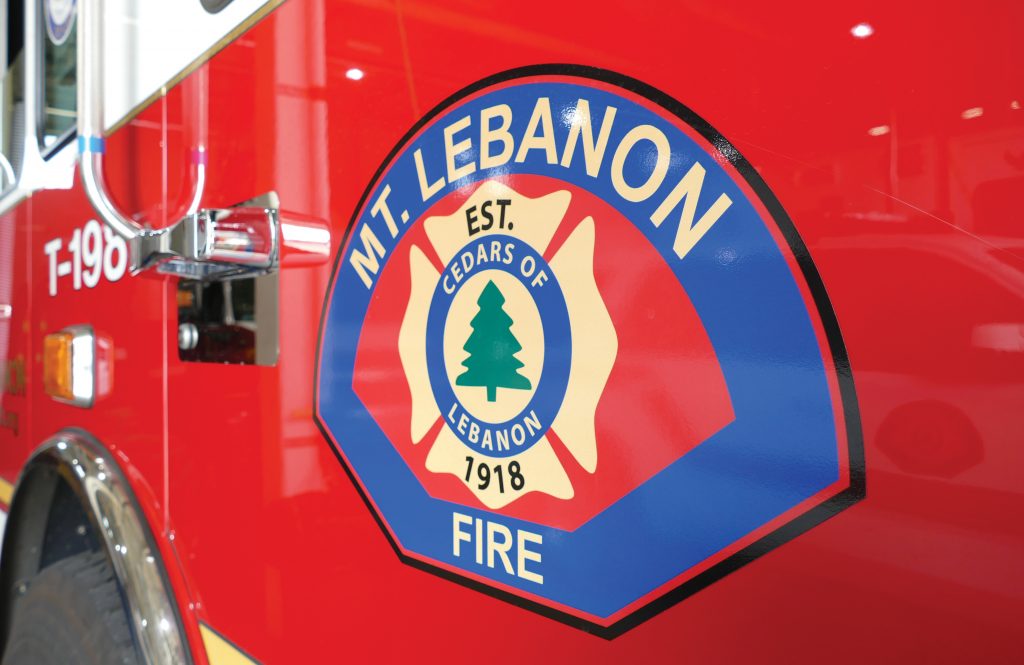 FIRE DEPARTMENT FEEDBACK How do you know you are providing customers with good service? Even more important, how do you know you’re providing customers with the services they want? That type of business questioning is what the Mt. Lebanon Fire Department considered when it began work last year on its strategic plan. Done every five to six years and updated and monitored annually, the strategic plan helps the department set goals for its internal and external operation by asking questions and getting feedback from residents and partner agencies, such as St. Clair Hospital, Medical Rescue Team South Authority, the school district, businesses and local officials.

“It’s hard to improve when you’re the only ones looking at what you’re doing,” says Lt. Joe Gavita, a member of the fire department’s community outreach platoon.

The Commission on Fire Accreditation International requires Mt. Lebanon to get external feedback every three years, but it makes more sense to get it more often, says Fire Chief Nick Sohyda.

The plan helps the department to evaluate whether it is providing true value to residents, who pay about $98 per capita each year for the department’s services. It goes without saying that the department does not want to serve residents by putting out fires in structures. It would rather prevent them in the first place. “We are actively trying to prevent the need for us to show up emergently,” says Deputy Chief Rodger Ricciuti.

“What I hope is everybody in some way gets their $98,” says Sohyda.

CAUTION TAPE MEANS…USE CAUTION Firefighters don’t get shocked easily but after the February windstorm, they all were shaking their heads. Falling trees were hazardous as they downed power lines, cut off access to many roads and cut power to houses and traffic signals. But the biggest danger was the number of people ignoring barricades, moving safety cones and otherwise disregarding safety barriers to get where they wanted to go.

Usually, the fire department will stay on the scene of a downed line to keep people from entering a dangerous area. But during the February storm, Mt. Lebanon received 80 calls to 911 in an eight-hour period, meaning the department only had time to set up barriers and tape before heading to another location. Yet firefighters have story after story about residents moving barricades to get to their driveways without realizing that an active power line was just steps away.

“We’re not here to inconvenience you. We’re trying to keep you from getting killed,” Sohyda says. In one instance, firefighters reported to a scene to see caution tape already up even though they knew first responders hadn’t been there yet. “I put that up. I’m here to keep the residents safe,” the neighbor proudly reported. Despite the good intent, please don’t do that.

Ricciuti showed a picture from his cellphone of a 4,000-volt power line down in a brush of trees. What you can’t easily see is a metal fence under the brush. Someone coming into contact with that fence, even 300 yards away, would be killed.

The classic “Oh, that’s just the Verizon line, not a power line” is a response they also heard from residents. But if that Verizon line is touching a live wire, it’s also charged. Please, don’t become a needless statistic.