SAFE SCHOOLS The Mt. Lebanon School District will receive a $476,660 grant for security-related training, equipment and infrastructure improvements. The grant, from the Pennsylvania Commission on Crime and Delinquency’s School Safety and Security Committee, is the second largest award in the region.

“The district is taking a two-pronged approach: Infrastructure and mental health concerns.” says Irvin. “The grant allowed us to go in both directions.”

The Mt. Lebanon Police Department has conducted security assessments for all of the district’s 10 buildings, something Irvin says saved a lot of time and effort.

“A lot of districts didn’t have those assessments, and would have to spend time and maybe a portion of the grant money on them,” says Davis, “but thanks to Chief [Aaron] Lauth and the police department, we had a big head start.”

Most of the improvements will not be noticeable; Davis says a big chunk of the infrastructure portion of the grant will be used for more cameras and surveillance equipment.

LOCK IT UP, LEBO Thieves are finding it easy to score a quick buck in Mt. Lebanon because of the large number of cars left unlocked. It takes mere seconds for them to open a door, grab some sunglasses or a phone and get quick cash. It also takes mere seconds to lock your car. Don’t leave your keys inside and take all valuables with you.

The Mt. Lebanon Fire Department also asks that you slow down when approaching a fire vehicle parked at a scene. There’s often a lot going on during an emergency and a lot of personnel loading and unloading gear. Take extra care around them. When you’re driving, always pull to the right for sirens and lights. Do not stop, do not block intersections and only pass emergency vehicles on the side of the road if you have plenty of room. 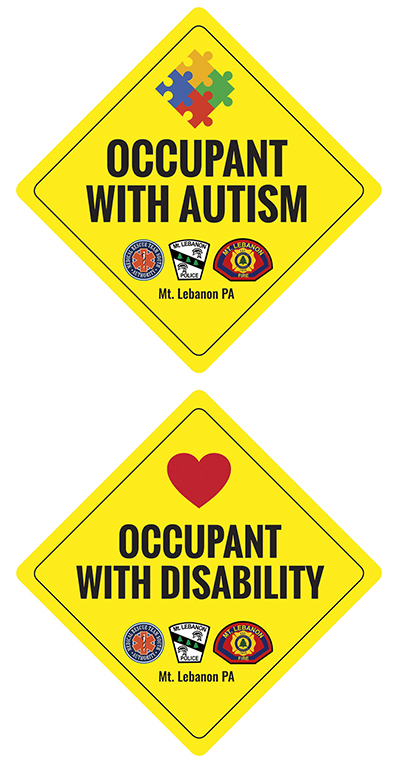 KEEPING EVERYONE SAFE In an emergency, some people have difficulty responding because they’re hurt. But others may have difficulty responding because they have a disability. People with autism or another intellectual or physical issue may not respond the way emergency personnel would expect. They might not be able to answer questions. They might not stay still. They may even run. What can be done to protect everyone in these situations?

The Mt. Lebanon Police Department, in cooperation with the Mt. Lebanon Fire Department and Medical Rescue Team South Authority, now has stickers to identify cars and homes where a person with a disability may be. This bit of warning will give first responders a heads up.

“Our hope is that you bring that person with you to pick up the sticker so they can recognize that we are there to help,” says Police Chief Aaron Lauth. It also gives the responders background information that could be helpful in an emergency.

“Moving forward, we will always be on the lookout for additional training sessions that will help our officers keep everyone in the community safe,” Lauth says.