The memorial service was the first gathering of its kind in honor of Dixon Martinez, organized by the Samuel S. Hicks Pittsburgh Chapter of the Society of Former Special Agents of the FBI, otherwise known as the Retired Agents Association. Dan Haser, a retired agent who arranged the ceremony, said he hopes the wreath laying would be the beginning of an annual tradition to remember Dixon Martinez.

About a dozen retired FBI agents attended along with members of the Dixon family. The Rev. Jerome Dixon, Dixon Martinez’s uncle, recited a few prayers at her decorated grave, followed by FBI Chaplains the Rev. Joe McCaffrey and the Rev. Steven McKeown. Dixon Martinez’s brothers Ed and Paul Dixon spoke to the crowd of approximately 25 people, and expressed gratitude for those in attendance who honored their sister’s life. 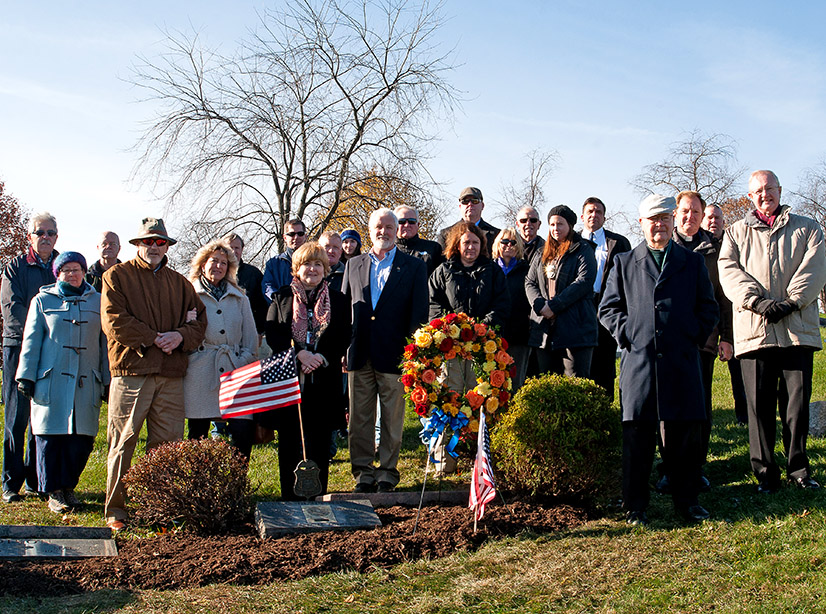 Half of the group gathered afterwards to share stories about the legacy Dixon Martinez left behind in both the bureau and the community. Seated at a long table in the back of Bob’s Diner, Paul Dixon remembered taking his sister to shooting practice with some of his friends. Initially underestimating her ability, Dixon’s friends sat awestruck as Dixon Martinez hit each target with practiced precision.

Since her death, Dixon Martinez is best known in the community as the inspiration behind Martha’s Run and the namesake of Martha’s Playground in Mt. Lebanon Park. Martha’s Run is a fundraiser in Mt. Lebanon each April supporting Martha’s Fund, a charitable organization assembled by friends and family to build neighborhood playgrounds in celebration of her love for children.

But Mt. Lebanon isn’t the only place where Martha’s name lives on: Her name also adorns The Martha Dixon Building in the FBI’s Pittsburgh Field Office and the Dixon Martinez Evidence Response Team at the FBI Washington Field Office.