Anthony Capozzoli, a Mt. Lebanon resident and 1980 Mt. Lebanon High School graduate, has an interesting card in his wallet.

Capozzoli is one of four Animal Control Officers, part of the South Hills Cooperative Animal Control department, who work to keep animals–dogs, cats, deer, groundhogs, foxes, rabbits, squirrels, raccoons, you name it–and the people who live with them, whether by their own volition or otherwise, safe. The four officers service 11 different districts: Mt. Lebanon, Upper Saint Clair and Scott Township make up the majority of calls, but Capozzoli may be dispatched to Dormont, Green Tree, Whitehall, Castle Shannon, Heidelberg, Carnegie Baldwin Township or Rosslyn Farms. Funding for the animal control unit is divided among all 11, and calculated based upon how many calls they dispatched in the previous year. In 2014, 38.4% of calls were from Mt. Lebanon residents, the most of any other municipality. 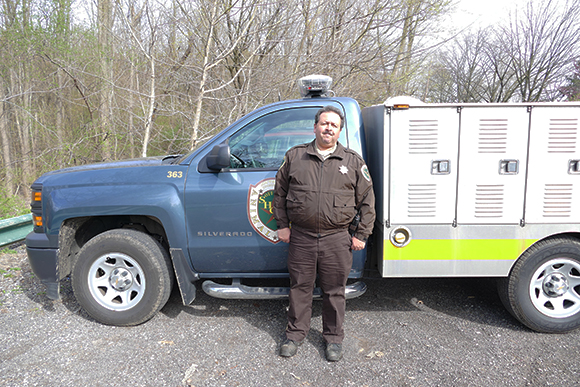 Capozzoli’s duties are varied; he could be dispatched to catch a loose dog or he may need to call a resident and give advice about what to do with a squirrel in the attic. When someone traps a raccoon, he’s the one who picks it up. As for today’s work, he’s just been called with the following report: a man’s dog came off-leash in a public park and killed a groundhog. It’s Capozzoli’s job to locate the dead animal and take it to the Allegheny Health Department for testing. Animals found in public parks that test positive for rabies mandate that signs be posted throughout the area, warning everyone who uses the trails, soccer fields or other amenities. Thankfully in his 25 years of work, he’s only seen four or five positive rabies diagnoses. “But they weren’t the obvious ones,” he adds.

Capozzoli grew up on Haverhill Road and after working for the Parking Authority for 10 years, saw that there was a job opening as an Animal Control Officer. At the time, the qualifications were vague: someone outdoorsy who knew their way around the area. Capozzoli fit the bill. Twenty-five years later, here I sit in the passenger seat. While dealing with people is no less important than it ever was in this job, Capozzoli is now more aware of it with a few decades under his belt. “Everyone has their own sense of right and wrong,” he tells me. The variety of animals he deals with, though, have stayed the same.

“You don’t know what’s going to happen,” he tells me. I’ve already heard that same line from MRTSA, the Police and the Fire Department, but I imagine they also don’t come across quite as many dead animals as Capozzoli. And I’ll be honest: I’m fairly sure it’s a not a job I’d like to have.

I resolutely make that decision after we arrive at Bird Park to locate the dead groundhog.

The dog’s owner meets us there, to show us exactly where the carnage is. We trek back into the woods through a narrow path. Although it’s sunny and warm outside today, a fact I greatly appreciate living in Pittsburgh, the paths into the woods are still damp from the always-recent rain. I skip from rock to tree root in an attempt to avoid getting my boots dirty.

Spoiler alert: I’m in the woods. It doesn’t work.

The dog’s owner, a tall man who moved to Mt. Lebanon a few years ago, turns to his right and says, “here it is.” He ducks back into a small clearing and points to a small brown bunch of hair. Capozzoli wastes no time walking over, inspecting the perished, oversized rodent. Using gloves that reach up to his elbows, he bends over and picks up the groundhog by its tail and swiftly, with the precision of practice, swings it into a large, thick plastic bag.

Nope. Not for me. 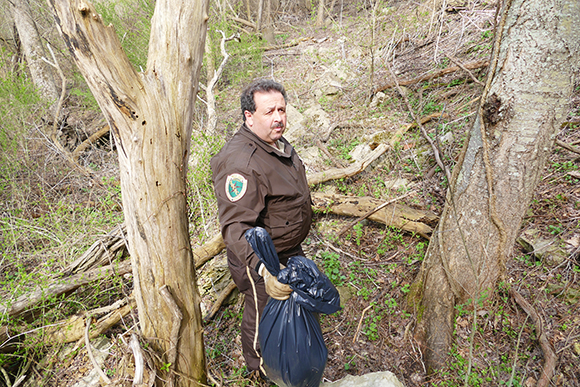 During our walk back to the parking lot, Capozzoli asks the owner how his dog came to be back in that patch of the woods. He simply says, “She came off leash.” Dogs are required to be on leash in public at all times, and the parks are no exception. When necessary, in order to enforce the law, Capozzoli has the ability to issue warnings, citations and fines. Today, the owner goes home fearful, but not in trouble. He’s already taken his dog to get a rabies booster shot, just in case.

Back in the car, Capozzoli hands me a piece of paper that says, “Animal Control Fun Facts – 2014.” He’s compiled a list of statistics from last year, including the number of animals caught in traps, Dead On Arrival or DOA deer removed (319, the most he’s ever seen), dogs picked up, cats picked up, relocated dogs, DOA dogs and cats… the list goes on. At the bottom of the section called “Domestic Animals” he lists: 28 Dog Bite Reports / Quarantines. He’s always on the guard against bites of any kind, and tells me his motto. “Today’s not a good day to get bit and tomorrow’s not looking very good either.” On calls, he keeps his hands clear of any sharp teeth and does his best to avoid situations that might warrant a chomp. He’s also vaccinated bi-yearly with a rabies titer along with an antibody test to ensure his protection from the disease is strong.

At home, Capozzoli doesn’t have a dog, though he’s had many and very nearly adopted a dog a few days ago, but eventually decided against it. “I like not having any responsibilities at the house,” he says. He also has two kids, one is a freshman at Penn State, another is a junior at Bethel Park High School, where he lives. His mom still lives in Mt. Lebanon.

“I probably couldn’t sit in an office all day,” he says.

As we drive down the road, he receives another dispatch–his phone fills the truck with a loud, buzzing noise–and needs to make a call.

“Hi Mr. Jackson, this is Tony from Mt. Lebanon Animal Control. How are you today?”