Structural collapse, intense heat, flammable and explosive gas tanks, the lack of oxygen, fire control and the dangerous cherry on top, civilian rescue: firefighters are trained to handle it all. But they probably won’t die from any of those obvious risks. It’s the heart attacks–the leading cause of death for on-duty firefighters–they have to watch out for. That’s why staying in shape and learning to handle stress is an important part of every Mt. Lebanon firefighter’s job.

When a life-threatening medical call comes in, firefighters, who are also trained as emergency medical technicians, have 60 seconds to get out the door. When a fire is reported, they have 90 seconds. The adrenaline is both a best friend and a worst enemy. It keeps them alert and ready to roll when needed but consistent stress wears down their bodies; career firefighters live 10 years less than your average citizen, I’m told during a tour of the truck. But Kurt Christofel and Sean Daniels, both career firefighters at the Mt. Lebanon Fire Department, cite that same adrenaline rush as one of the reasons they love their job. “I like the element of excitement,” Daniels says. Mt. Lebanon’s fire department is a combination department, which means 17 career firefighters, 38 volunteers, Fire Chief Nick Sohyda, and two administrative employees work together to provide emergency assistant around the clock. 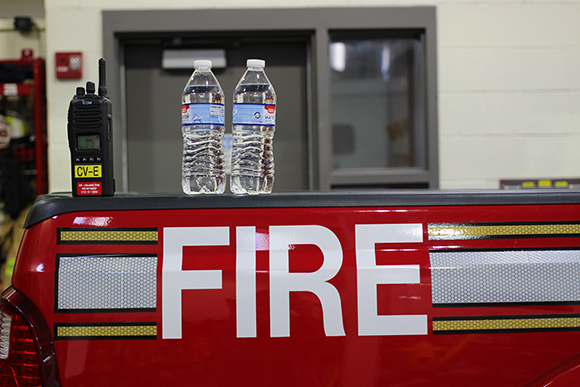 I’m following the C-Shift, a bunch of career firefighters who are also responsible for training. New recruits, volunteers, and career staff attending workshops learn from the C-Shift. And, except for Kevin Maehling, they all have the same haircut, too: no hair.

The unit starts out the shift with a workout, as each on-duty shift does Mondays, Wednesdays and Fridays. Fire Chief Sohyda leads the CrossFit-based exercise routine, which involves circuits of running up and down stairs carrying a heavy hose, hammering an oversized tire, dragging a dummy human (affectionately named Moe) back and forth, lifting a weighted rod up and down several times and floor exercises, such as pushups, jumping rope rounds and weighted ball bounces. Of course, Sohyda sports the same no-hair hairstyle. I carry the heavy bundle of hose up two staircases, just to see how heavy it is. While I’m not in pain, I make a mental note to work out more. 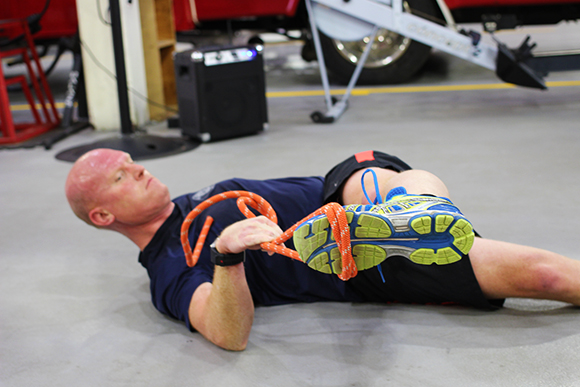 The workout serves not just to keep firefighters in shape, but also to keep stress levels low. The firehouse actively combats anything that raises cortisol levels, the stress hormone, and, hopefully, keeps their firefighters a little bit healthier. (Chronically raised cortisol levels are linked to a laundry list of health issues.) Trucks are outfitted with headsets, to help everyone can talk to each other without raising their voices, and on most Fridays everyone eats lunch together. The camaraderie among firefighters is evident. They laugh, they joke and they make fun of each other. Yet they take the job very seriously.

“If you don’t find something wrong, you’re not looking hard enough,” says Christofel, while doing an inspection of the most recently returned fire vehicle. He’s in the back seat, looking behind chairs, checking the seat belts and opening the various kits to be sure they’re fully stocked. True to his word, he finds something: a portable oxygen tank–one is attached to each seat–has a twisted shoulder strap. Every small detail matters, because when there’s a call and fire to be dealt with, firefighters have no time to waste and a very small margin of error.

The morning passes by quietly with the group workout and later, a quick spin in a local church’s parking lot as Daniels teaches one of the volunteers how to drive the truck. Unlike a car, a fire truck’s front wheels are  located behind the driver. That makes the serpentine and reverse serpentine exercises, curving back and forth around orange cones, much harder to perfect. We spend a little more time backing into a coned-off parking spot and take a cruise around Virginia Manor’s wide streets with the trainee before heading to the station for lunch. The atmosphere is friendly and casual.

Seated at the table are another six guys I didn’t realize were in the building, and we crowd together–a long row of hungry mouths. Fried fish sandwiches with fries from a nearby restaurant are on the menu for almost everyone. The sandwich challenges my stomach capacity. But I’m hungry. And like most of the guys, I push through.

As the food coma begins to set in, the radio goes off, bodies move and I hear a click. Two of the firefighters have vanished down the pole leading straight down to the first floor. I didn’t even see them drop, and Maehling is motioning to me to run down the stairs and get into the truck. Within 60 seconds I’ve managed to not trip down the stairs, hop in the truck, put my headset on and buckle my seatbelt. We’re off, the truck’s siren caterwauling down Mt. Lebanon’s avenues on the way to a medical call. An elderly man is having trouble breathing. 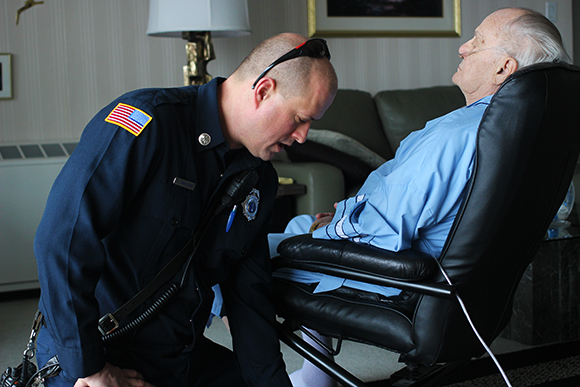 When we arrive at the scene, we find the gentleman hooked up to his oxygen tank. He’s in no immediate danger, has no pain or dizziness, but isn’t breathing as well as usual. When the medics arrive, he’s helped onto the stretcher and taken to the hospital. One job taken care of, Christofel does his second job: “While I’m here, I’m going to check the smoke detector.”

These random checks that occur during every routine or emergency call have helped Mt. Lebanon Fire Department install 291 free smoke detectors in the last year. If a residence has a smoke detector but the batteries are dead, they’re replaced free of charge. Christofel tells me, “They save more lives than any firefighter ever has.” He’s been a member of the Mt. Lebanon Fire Department for five years.

When we’re all back at the station, we gather around a sheet metal mock structure Christofel has built for training purposes. It’s about two feet wide and 18 inches tall, and has two rooms stacked on top of each other with a tall stairwell on the right side. Each room has various doors and windows which can be opened and closed from the outside, and the front of the structure is fire glass, so all the indoor action is visible. We’re about to set this structure on fire and watch the blaze patterns move through the entryways and rooms, depending on what pathways are open.

The small blaze, contained within a baking sheet on the bottom floor, doesn’t go anywhere or grow very big at first. But when Christofel opens the miniature door into the stairwell, flames shoot up and out. When he takes the roof off, they spread even farther. 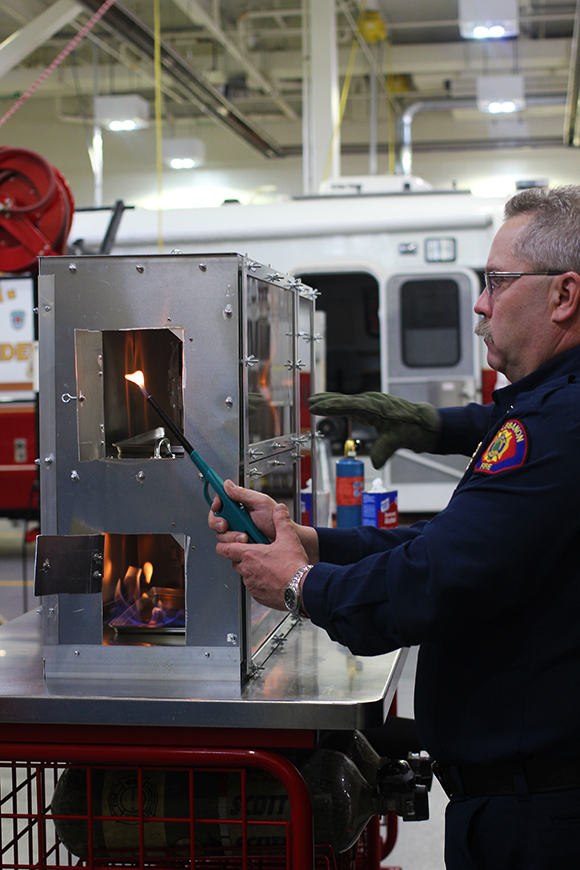 The firefighters are fascinated. Five of us are gathered around the small blaze and I’m the only one not trying to get a closer look.

This turns out to be a wise decision, later, when the high heat warps the metal just enough to shatter a glass panel, without the hint of a warning. No one is hurt.

Later, we respond to a call where a woman is stuck in an elevator. She isn’t in danger and the elevator hasn’t moved, but she doesn’t know how to get out. “When things feel out of control,” says Daniels, “we’re the people with the knowledge, skills and abilities to make it better.” This is exactly one of those times. The firefighters open the elevator doors without issue, free the woman and carry her groceries upstairs for her. They then make sure the elevator is working properly, check the smoke detectors on their way out and chalk the call up to “operator error.” The woman hadn’t closed the door correctly. But she got the help she needed.

Daniels didn’t find his previous career in banking and loan sales very satisfying. He’s found a new home in the fire department and spent his last 10 years as a career firefighter. “I look forward to working every day. When someone calls, we’re the people that can actually make it better.” But even firefighters face scary situations. “Anything involving children is scary,” he says. Daniels has two of his own, a student at Mt. Lebanon High School and another at college.

Maehling laughs while he tells me about his intense initial routine at any hotel. “I bring a smoke detector with me, in case the hotel room doesn’t have one,” he says, “I map out the fire exits with my kid, and we crawl with our eyes closed and count doors.” Daniels and Christofel do similar things with their families, and none of them leave without smoke detectors packed and ready. “If there isn’t one in the room, I’ll install one,” says Christofel.

It may seem a bit much, but these guys are the ones who see what can happen when you’re not prepared, warned or in reach of an exit. I make a second mental note: check my smoke detectors’ batteries when I get home.

Christofel is also one of the first guys I would call in an emergency, because like Dave Terkel from Medical Rescue Team South Authority, he’s part of the highly talented South Hills Area Council of Governments Technical Rescue Team and also creates training exercises for them. The team responds to difficult rescue situations that can’t be handled by your average responder and often require medical assistance while the person is still trapped and unable to move. Christofel shows me a picture from one of their practice sessions, where he pinned a dummy body between a crashed car and the side of a trench. “Oh yeah, that was fun,” he says, smiling. 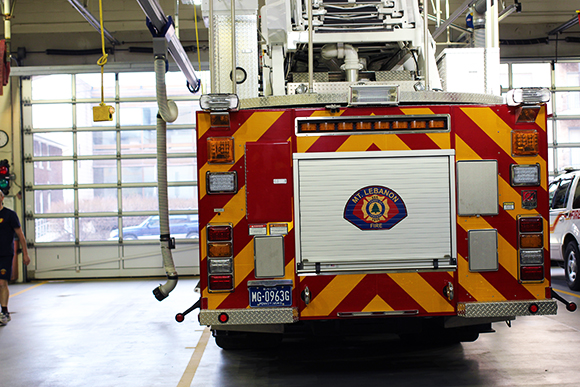 Thankfully, by the end of the day, none of that has happened.

We laugh, shake hands, bid farewell and I thank the firefighters for letting me follow them around for the day. They head home, one more shift passes safely, and I walk down Washington Road towards home.

When I get home, I greet my dog and then immediately go for a little walk around the house, checking all the smoke detectors.