“You never know with this job.”

That’s exactly what one of the medics said on my last ride-along, with Medical Rescue Team South Authority, but this time I’m in the passenger seat of a Mt. Lebanon Police SUV after a full day of riding with little action. Cpl. Michael Belak, an officer since 1994, has just responded to a call 28 minutes before the end of an eight-hour shift; a car slid off the icy roads, grazing a telephone pole and landing in an otherwise empty parking lot. No injuries. Belak, the second-responder officer to nearly all calls today, is shooed off the scene within minutes by another officer who doesn’t need assistance. “I’ve got it, corporal. Go home.”

The driver is in surprisingly good spirits, despite his close brush with tragedy. A few more inches to the left and there wouldn’t be anyone smiling at this scene.

Apparently, I’m some kind of good luck charm; the evening shift is the busiest according to everyone I’ve talked to. Except tonight. But that means I’ve had ample time to dive deep into not just Belak’s police psyche, but that of Officer Jeff Frolo earlier, and for a few minutes this morning, Officer Ryan Miller, too. For hours, I’ve been shadowing officers on their rounds and spouting all questions that come to mind. My curiosity has no boundaries.

I started out this morning with Miller, who’s worked for Mt. Lebanon for five and a half years. We begin by checking all of the public parks. A few minutes into his shift, he’s dispatched to make a phone call; a woman reports being stalked and harassed.

She’s been out driving around and noticed someone writing down her license plate number. The harassment and stalking accusations don’t have legal basis for Miller to do anything, but he encourages her to file a report at the station anyway, if she feels strongly about it. As he negotiates with the woman on the phone, a car runs a stop sign directly in front of him. But Miller’s in the middle of the call and can’t end it just yet. The offending driver catches a break. 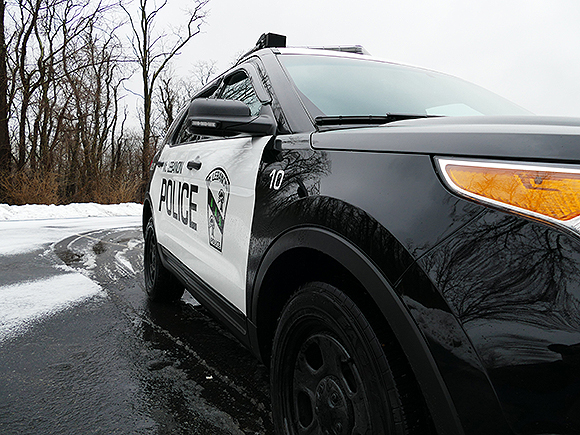 Before long, Miller is called back to the station to handle a Protection From Abuse report. He’ll be indoors, interviewing the involved parties and writing the report, so he passes me off to Frolo for the rest of the shift. Frolo and I hit the road, circling the main streets for hours. We talk about his daughter, who’s studying education at Penn State. His son is still in high school. He’s been a police officer for 23 years, 13 of which were in Mt. Lebanon, and attributes the longevity of his career to his ability to “turn it off” when he goes home.

Frolo talks about the increase in mental-health related incidents. We chat about the implications of body-cameras for police (which the department does not use), whether or not they should be left on all the time or only when officers respond to a call, and the privacy concerns not just for officers, but in the private homes of those calling 9-1-1. Frolo isn’t enthusiastic about always-on body cameras, and I can understand why. Even the most angelic, by-the-book of us would be freaked out if someone filmed all of our working hours, in the name of oversight and transparency. Yet turning body cameras on and off in a high-stress situation—such as a sudden pursuit or an unexpected escalation of normal events—distracts officers from assessing the situation, potentially impairing their ability to make already-difficult, split-second decisions. Still, the public is calling for more accountability in police work, after the recent string of tragic events involving police departments across the country, including Ferguson, Missouri.

The answer isn’t easy. But it doesn’t matter, ultimately, what an individual officer or ride-along journalist thinks. Frolo, a public servant, will follow the law and continue to enforce it. And he’s glad to do so in Mt. Lebanon, saying he feels “very fortunate to get into a place like this.” His previous 10 years in Monessen were vastly different; the budgets for departments in other parts of the country don’t always leave enough room for training, support or a salary on which you can raise a family. Mt. Lebanon officers have an extensive initial training period, with mandatory monthly training sessions. And there’s no hesitation in letting a probationary officer go if he proves he’s not up to the standard.

Everywhere I go today, officers repeat the same phrase: “We have a good group of guys.”

The shift with Frolo ends and I opt to stay on for another, this time with Belak for the evening shift. “Roll call is a good way to start the day off with a smile,” he explains about the joke-saturated briefing I’m sitting through, as one officer updates the department on various ongoing cases and updates, in between indiscriminate wisecracks. Once we’re in the vehicle, the shift begins with a few loops around a local elementary school as school lets out and short-statured chaos ensues. The busiest part of this ride-along is the conversation: Belak and I both share an enthusiasm for drinking coffee, off duty, at Eat ‘n Park, specifically the one on Route 51.

When I ask him about himself, he doesn’t miss a beat, “My life is divided into pre K-9, and post K-9.” For nine years, he worked with Jerd, a German Shepherd trained to sniff out narcotics, track fleeing suspects and serve on the police force alongside officers. Belak has a military past, serving in the National Guard for 11 years and training as a Ranger, but was never deployed. He’s also worked with the Mt. Lebanon Police Department’s firearms and defensive tactics divisions and is a long-time member of Mt. Lebanon’s Critical Incident Response Team team formed in 1999 and later, SHACOG’s CIRT team, formed in 2009. Yet Jerd defines his career. “That dog taught me a lot more about police work than a human ever did.”

We cruise through the borders of town; where Mt. Lebanon meets the city of Pittsburgh, where Mt. Lebanon meets Scott Township, where Mt. Lebanon meets Castle Shannon, and beyond. The Bradley School, a now-vacant lot near Keystone Oaks High School, gives me the creeps; someone has tagged a religious fountain, now dry, with graffiti and the massive building looks straight out of an old-time, black and white horror film. We drive around to make sure it’s free of any flagitious characters and then head back out. Pointing to a nearby hill, Belak tells me there are Civil War graves there. Creepy indeed.

I’m relieved when we discuss dinner. The weather is supposed to turn bad and we don’t want to be out on an empty stomach. He suggests we stop at his favorite place to grab a salad: St. Clair Hospital’s Café 4. After dinner he also takes a moment to write up a report from an incident yesterday, which he lets me read. Serving a warrant, the police surrounded a nearby home, secured the area and apprehended a suspect. I may not have seen much police action during my day with the police thus far, but it’s a reminder of the danger they still face.

The bad weather–wet snow and freezing temperatures–kicks in during dinner and we’re back on the road. Night falls. I get sleepy, but stick it out. Finally, we respond to the first incident of the shift and of my day. 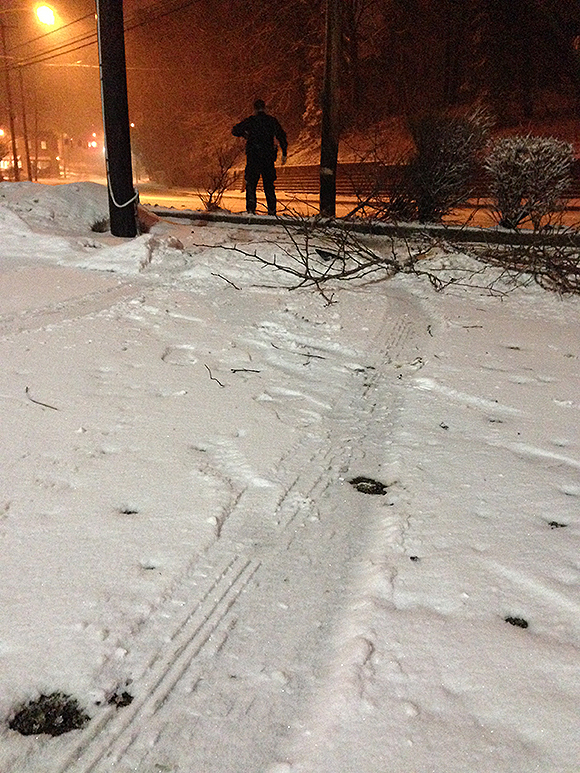