Behind the scenes, in the back room with the pipes, machinery, temperature control equipment and loud generators of Mt. Lebanon’s recreation center are a lot of people, but two faces have been around for more than two decades: those of Shawn Hess and Jon Poznick. In the control room of the swimming pool and behind the bleachers of the ice rink, Poznick and Hess are the two superintendents that keep things running, both figuratively and literally.

The pipes hum loudly and a sign advises in all capital, red letters, “Hearing protection recommended.” This back room is home to all of the machinery, pipes and equipment that keep the ice rinks frozen and functional. The room itself is warm from all of the activity, and between some of the pipes is a T-shirt hung up to dry. In the corner is a Zamboni diagnostic machine, more than 20 years old. The physiognomy is reminiscent of old arcade games. Next to it is a huge panel of controls—knobs, buttons and meters galore. 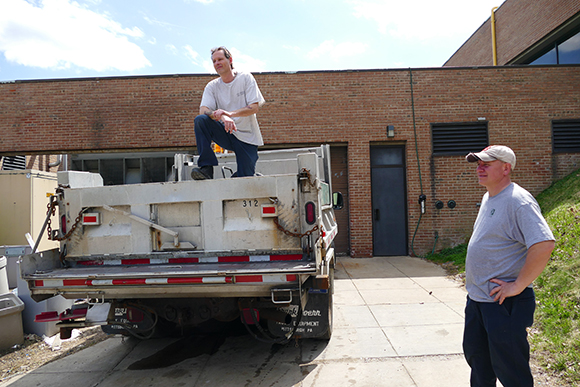 Poznick, a resident of Whitehall who just celebrated his 25th anniversary with Mt. Lebanon’s recreation department, is tall, a bit quiet and intentional. Hess is his opposite; he talks and smiles liberally and seems to bounce around the room. Each of them has one daughter.

A typical day at the ice rink involves driving the Zamboni, the instantly recognizable electric-powered machine that’s used to lay fresh ice over the surface of each rink between activities. Hess laughs when I ask him how many times he’s driven the Zamboni, “Probably a thousand,” he answers. We drive around the edge of the rink twice and then cut up the middle before filling in each side, laying down new ice. The machine cuts off a thin layer as it goes so as to keep the levels even. Hess controls how much to cut, how much water to lay down, and how slowly he needs to go to keep it even. It’s a skill he’s perfected over time. There is no Zamboni-driving school; you learn on the job. 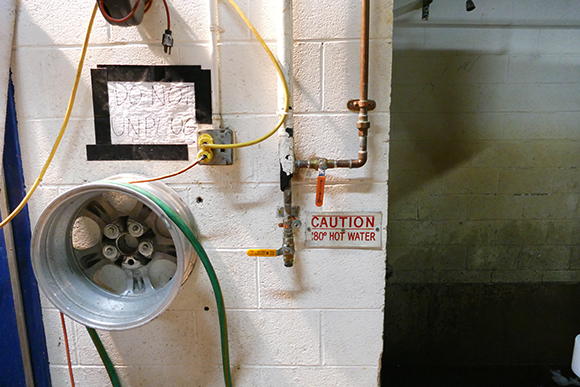 When we pull back into the machine room, Hess drives the Zamboni right up to a pool of water. He uses the controls to lift up the front compartment, filled with the ice we’ve just cut off the top of the rink, at an angle, and it pours right into the small pool. Steam rises and it hisses as it hits the surface. The water is 180 degrees.

Farther back in the machine room sits another electric Zamboni, this one red, and a few gas-powered relics from the past. They’re back-up machines, in case something happens to the other newer models. The newest Zamboni cost $150,000, so even an old machine isn’t a throwaway. A big part of Hess and Poznick’s job is maintaining the machinery, which means changing the ultra-sharp ice-cutting blade on the Zambonis once a week. Today, the red machine is getting the new teeth, and I watch as Poznick unscrews the 10 thick screws that hold the blade in place.

“It’ll take your arm right off,” he warns me. I take a step back.

The blades are about five feet long and six inches wide, and the blade they pull out from the machine is covered in rust. A week of water-intensive work does a number on the blades, but they aren’t thrown away. A company called Pittsburgh Blade Company cleans and sharpens them and gives them a second life and another week on a Zamboni. Poznick estimates a single blade, between $250 and $300 brand new, could be used for a couple years that way. Once they carefully placed and screwed in the fresh blade on the Zamboni, all arms intact, Poznick calibrates the blade to make sure it’ll cut evenly. As he works, Hess works behind the scenes to put away the tools they’ve finished using and together they carry the rusty blade, firmly in its wooden case, into the storage area.

While the machinery for the Zambonis may have changed over the years, with new layouts, a switch from gas to electric and reoriented buttons to push, the blades are all the same.

Working with Hess and Poznick are six part-time employees,  primarily responsible for keeping the buildings clean and in order. They also help set up seating and tables in the upstairs rooms when someone rents them.

Hess happened upon his job by chance about 23 years ago—he’s not sure. “You’re here so long, you don’t even know how long it’s been,” he says with his signature smile. His now-wife used to work at the Mt. Lebanon Tennis Center and told him about the job opening with the Recreation Center. Eight years ago he was promoted to his current position, a full-time superintendent along with Poznick. The two have been friends for years.

Next, we take a drive over to the Tennis Center in an unusual vehicle: the scissor lift. They need to use it to change the lights, so we embark on the slow drive down the street, winding around to make use of the handicapped-accessible curbs. We’re an odd sight: two guys in their work boots and official Mt. Lebanon sweatshirts, and a shorter woman in business casual, with a notebook and camera on hand, rolling down Stadium Drive in a scissor lift at no more than five miles an hour. As we arrive at the Tennis Center, we all duck to avoid getting hit by tree branches on a last stretch of sidewalk. Once we manage to get the lift inside the small door to the bubble, we walk back to the Recreation Center. Delivery complete.

Today’s to-do list also includes picking up fertilizer from the golf course. Hess and Poznick are responsible for planting and growing the grass at the pool this year. “We’re everywhere,” Hess says. “It’s different every day.” They pull the truck out and Hess looks right, checking the road for traffic before saying, “you’re clear;” Poznick turns to the left. Once the fertilizer is in the truck and they’ve made it back to the Recreation Center, Poznick hops up and hands the fertilizer down to Hess, who puts it on a wheelbarrow. When Hess finishes rolling the bags of dirt to the storage room, Poznick opens the door for him. They’re a well-oiled team machine. 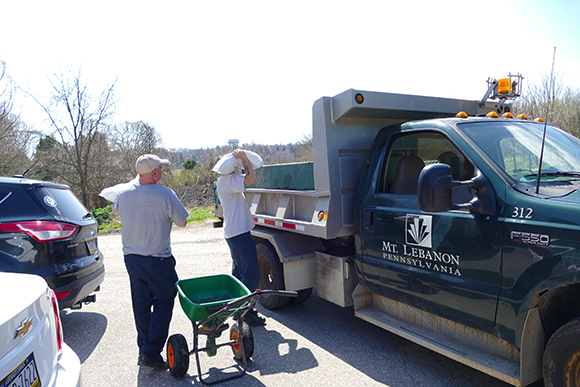 It’s been a few hours now, but before Hess’ shift ends, the pair also refills all 40 battery chambers of the Zamboni with distilled water, by hand. It’s just another small duty that keeps the ice rink running. Poznick will continue working for the rest of the day. They trade weekends, one of them working Saturday and the other working Sunday, but during the week, they tend to work together.

I have a feeling tomorrow’s to-do list includes very few repeats. But one constant won’t be changing: Poznick and Hess will figure it out, together.