Kolette Tetlow is on the other end of the phone from her temporary digs in Philadelphia, but she’s so bubbly that she sounds like she’s in the room. Tetlow, 8, is in the middle of a cross-country voyage starring as Ivanka, the female lead’s daughter, in the first national tour of the Tony-winning Broadway musical Once.

Instead of spending her days in second grade at Markham school, the Cherokee Place resident is visiting cities all over the country. Once she’s called to the theater for the day an hour before curtain time, her tutor begins her schoolwork. (Kolette reports, it’s “lots of writing and spelling, and we also do some reading and math.”) Then, she’s onstage for 30 minutes of the 2-hour musical, which she performs 8 times a week (two days have two shows and then she has Mondays off).

She’s having so much fun she can’t even pick a favorite part. “Pretty much the whole thing,” Kolette says. “It’s way better than I thought.” The hardest part is “not seeing my dad,” although she does a lot of Skyping and emailing him. She’s also pining for her two dogs, two cats and two fish back home, even though her dad, Nate, has it all under control. “He’s a very good pet caregiver.”

Tetlow hit the road September 9, beginning with three weeks of rehearsal in New York City. She will be on the tour for one year with her mom, Karly, her brother, Keaton, 5, and sister, Korinne, 3. (Karly is home schooling Keaton while they’re on the road.) In each city, the family has a small apartment. They don’t have a car but don’t need one, preferring instead to learn the city by walking or taking transit. By day, the family is free to visit museums, parks or whatever they want. And the cities are fun: Orlando, Boston, Chicago, Miami—and a stop in Pittsburgh, March 11 to March 16, when Kolette will sing on her home stage at the Benedum Center for the Performing Arts as part of PNC’s Broadway Across America series. 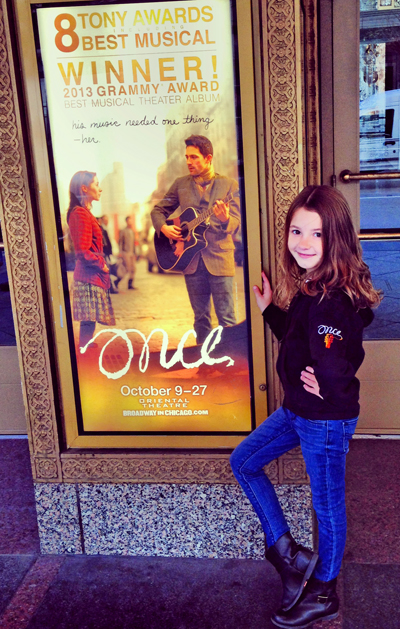 At the end of the day, all kids are in bed by 10:30 and mom has some time to herself, to catch up on her favorite TV shows. Even though the schedule is hectic, it’s a break for Karly, without a house to clean or a million trips back and forth to school or the market every day. Nate visits the family every few weeks for four days.

The Tetlows get to attend the opening night party in every city, although the fete in New York City’s Sardi’s with the original Broadway cast members, was a favorite. “To be a part of that was incredible,” Karly says.

“This show is pretty low maintenance,” Karly says, noting her daughter is not on stage for a lot of it and she sings in one song, so it is not hard on her voice. “It’s very low stress—a great first show for her.”

She is the only child in the show, so the cast dotes on her and “she gets spoiled rotten,” Karly says. They threw her a surprise birthday party in October and set up a haunted dressing room with costumes for Halloween. “They make it fun.”

Kolette, who has been singing virtually since she was born, studied at the Center for Theater Arts and with vocal coach Erin Kesser. Now that she’s hit the big time, she is a member of Actor’s Equity. She is also subject to tons of different child labor rules, which differ in each state, from the taxes to the age limit. Luckily, the show takes care of all of that paperwork, Karly says.

Kolette is dreaming of one special role, that of Cosette in the Broadway revival of Les Miserables. “Her name is not that different from mine,” Kolette says with a giggle. Cosette’s signature song, Castle on a Cloud, is a favorite of Kolette’s and was the second song she learned with her vocal teacher. She auditioned and got a call-back for that Broadway role, but at press time had not heard.

Despite Once being her first real Broadway production, Kolette doesn’t get butterflies. “I’ve done this for a very long time now, so I don’t really get nervous.”