Every time we see the words “School Shooting”—and that’s way too often—our stomachs clench and our core temperatures drop about a dozen degrees. Some of the places where shootings have taken place are communities very much like Mt. Lebanon, leaving us with the nagging question,

“Could it happen here?”

Yes. Of course it could. It could happen anywhere. And that calls for precaution, preparation and protocol on the part of parents, administrators, teachers, police officers and the children themselves.

Mt. Lebanon School District has been working closely with the police department to make our schools much harder targets for anyone seeking to harm people.

Deputy Police Chief Aaron Lauth, along with Corporal James Hughes and Officer Scott Kunz of the Crime Prevention Unit, have been spearheading efforts to improve building security and raise awareness of actions everyone in a school building can take to increase their chances of surviving if the unthinkable should happen.

One of the most basic steps is making the schools harder to enter. Schools are public buildings, but that doesn’t mean every door needs to be unlocked and unattended.

Since the end of 2012-13 school year, the school district has tightened security at all school buildings, beginning with a standardized entrance procedure.

To gain entry into a Mt. Lebanon school, you have to be buzzed in from outside a locked door, where the building secretary can see you on a video screen. Once the front door opens, you enter a “capture vestibule” that connects only to the main office. In the main office, you sign in and receive a visitor’s badge with your name and your destination, before you are allowed to leave the office and enter the building.

Custodians do daily checks to make sure all of the electronics and the door latches are working.

Washington School, located at the south end of the central business district, is piloting a program where alarms on doors sound if a child or adult leaves the building without following the proper procedure. Staff members use programmed ID cards to exit themselves or when they take children outside. A computer screen shows office staff which doors are open.

“Every building has different concerns,” says Washington Principal Mary Kay Davis. “Washington is a much different building than, say, Foster, which is tucked away.”

Although Washington has not had a lockdown in Davis’s four years as principal, the teachers and students regularly practice lockdowns and evacuations. “Our teachers do an amazing job of reinforcing safety procedures with the kids without making them fearful,” says Davis. “We emphasize general safety, which is part of the children growing as citizens, which is a lifelong process.”

Once the entry points at the schools were better secured, the monitoring technology was put in place and the school staff was well-versed in the new entry procedures, the next step was to raise teachers’ awareness of how they might protect themselves and their students if a potentially violent situation involving a weapon should occur.

Throughout the last school year, MLPD conducted in-service training events in all of the schools, in which they simulated an active shooter situation.

“We’re trying with the school district to help prevent these types of events,” says Lauth. “We wanted to go beyond just talking about it, and give the staff some options to survive. We wanted to give teachers the sight, sound and feel of a shooter situation.”

The first part of the training helped the staff anticipate the noise and confusion that would be generated by a violent intruder situation. The second part dealt with making good decisions under pressure, which can prevent or minimize injury and loss of life. Follow-up sessions are planned for this school year, based on additional training police and school district personnel completed this summer at the ALICE Training Institute in Mansfield, Ohio.

ALICE, which stands for Alert, Lockdown, Inform, Counter and Evacuate, is a well-regarded center that offers training for all types of violent intruder situations—schools, malls, workplaces and other public settings. Lauth, Hughes and Kunz, along with the school district’s director of communications, Cissy Bowman, Howe School principal Michelle Murray and high school unit principal Doug Szokoly, attended a two-day seminar at ALICE. All of the attendees earned certification as ALICE instructors.

ALICE focuses on survivability,” Lauth says. “And the key to survivability is communication. ‘Alert’ and ‘Inform’ are two of the main components of the training.”

Sharing whatever information is available with everyone immediately is a departure from the past, when school professionals were advised to use code words for an armed intruder, so as not to cause fear and panic. The new best practice, Lauth says, is to disseminate as much information as possible as widely as possible. All staff should have access to the public address system, and should share pertinent information.

“If someone sees a person with a gun is walking down the hallway headed for the library, then everyone in the building needs to know that information,” Lauth says.

One of the keys to survival, Lauth says, is being able to make good decisions quickly.

This year’s training will expand the strategies that might be used in a threatening situation. “In many cases, hiding and staying quiet may still be the best option,” explains Lauth, “but we want teachers and staff to be familiar with a range of options that can increase their chances and the children’s chances of surviving.”

The process the district has implemented—screening visitors, training the professional staff and maintaining a high level of police involvement—are designed to make Mt. Lebanon schools a hard target.

“The truth is, someone who wants to be a school shooter, they’re looking for high body counts,” Lauth says. “They want to outdo everyone who came before. If they know that’s a lot tougher to do here, it may discourage them from trying.”

BEING CAREFUL OUT THERE 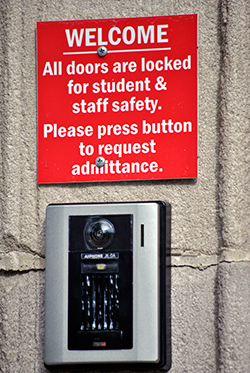 While school violence incidents loom in our collective consciousness, the truth is that our children are more likely to face more mundane dangers, and the district is taking steps to increase safety and awareness in other areas as well.

The police department’s Crime Prevention Unit spends a lot of time in the schools, teaching about 600 lessons each year on a broad range of topics for students of all ages in the Mt. Lebanon School District and other schools located in Mt. Lebanon—Keystone Oaks High School and Middle School, Seton-LaSalle High School, St. Bernard School, Mt. Lebanon Montessori School and all of the community’s preschools. In preschools and early elementary grades, lessons focus on safe walking, stranger danger and when to dial 911. In later grades, the subject matter includes cyber safety, bullying, drug and alcohol abuse, sexual harassment and unsafe dating or other relationships. The focus is on making good decisions. Officers also speak to students regularly in relevant courses such as driver’s education.

Mt. Lebanon is a walking community, and pedestrian-vehicular safety has long been a priority. Last year, the police department received its eighth consecutive AAA Platinum Award for Community Traffic Safety. the AAA’s highest for traffic safety. But even with that distinction, over the summer there were two pedestrian/car accidents, both of which police said were caused by the pedestrian. At Washington and Alfred, a pedestrian ran into traffic to join his friends across the street and was hit by a car. In the other, a pedestrian at Washington and Cochran did not wait for the dedicated walk signal, cut diagonally across the intersection and was struck by a car. Neither of the injuries was serious.

Parents of students in any of Mt. Lebanon’s seven elementary schools can download safe walking routes.

For parents who pick up and drop off their children, each of the schools has a Go Zone, with clearly spelled-out parking and traffic-related rules. You can download a copy of each school’s Go Zone rules.