The Santa Claus debate has intrigued the world for centuries. Should we believe the story exactly as we’ve been told: That he’s a jolly old immortal living at the North Pole with his wife, hundreds of elves, eight reindeer and a singular mission to spread joy every December 25? Should we believe the theory presented in Tim Allen’s The Santa Clause: That an ordinary guy is bestowed with the magic to become Santa the moment he (intentionally or inadvertently) accepts the terms of the position? Or is he just an idea: the name that we use to explain the spirit of cheer and good will that enters our hearts every holiday season?

What if I told you that Santa Claus is actually your neighbor? That Mr. & Mrs. Claus live in Mt. Lebanon. That they pretend to live a normal life here in The Bubble, but it’s all a front to conceal their magical yuletide powers.

Here’s what we know: John and Connie Bacha, Serpentine Drive, claim to have been “posing” as Mr. and Mrs. Claus for the past 15 years (a likely story). John’s Santa career began at the downtown Kaufmann’s after a friend encouraged him to interview for the position. He has “acted” as Santa at events all over the city—from Downtown Pittsburgh’s Light Up Night to the Original Downtown Santaland in the Strip District, where he primarily works this season. The Bachas have also appeared locally as the grand finale at the Pumpkin Patch Parade, riding in a 1967 Pontiac GTO convertible, and they have, for many years, been arriving as Mr. and Mrs. Claus on the firetruck at Lebo Light Night.

“He has a ball riding in that firetruck. He is more excited than the children! John’s a real kid at heart,” said Connie at an interview in their home, after offering me some delicious freshly-baked almond cookies. They were both stunned when I politely declined the accompanying glass of milk.

“Usually when I do [Lebo Light Night], there’s one or two kids who make me think ‘wow!'” says John. “This year, there was a little girl, about eight. She told me what she wanted, and as she got up, she turned back around and said ‘Santa? What do YOU want for Christmas?’ I was amazed! I’ve never been asked that in 15 years! So I thought real quick and said, ‘Honey, your mommy and daddy love you very much. So every day, I want you to say you love them and give them a big hug and a kiss.’ She ran up to them and did it right there!”

Later in the night, he encountered a girl who wanted a horse for Christmas. Staying true to his usual protocol when a child asks for a pet, he looked up at the parents, who rolled their eyes and shook their heads, and then turned back to her and said, “Actually, you aren’t allowed to have horses here in Mt. Lebanon. But chickens are allowed! Would you like a chicken?” She wrinkled her nose in disgust and moved on to the rest of her list.

On-the-fly creativity is an essential part of the job, according to John, who has been asked a variety of unusual questions during his tenure as Santa. He finds it easier to be creative when he has perfected his responses to some of the standards: “Where do you go on vacation?” (“Santa Monica!” he replies.) “Where are your reindeer?” (“On the rooftop!”) “Are you the real Santa?” (“Pull on my beard. You tell me!”)

In Mt. Lebanon, he also gets, “Santa! I saw some deer today. Are they yours?” and he responds, “Some of my reindeer must have gotten out! They are probably looking for me!” Strangely enough, there is some truth to this response, as local deer have been sheltering in his yard. Connie showed a recent picture of three deer sleeping in the middle of their backyard in broad daylight.

Connie’s role in the dynamic duo occurred naturally. She became Mrs. Claus when John became Santa, but because it is not as common to see Mrs. Claus, she does not attend all of John’s events. “The kids go nuts when they see me, because many of them have never seen Mrs. Claus before,” says Connie. She adds, “It’s wonderful living with Santa Claus. You have no idea how fun it is.”

Connie is a retired Chartiers Valley keyboarding teacher, and John retired from Verizon in 2002. Their sons, Jason and John Jr., both graduated from Mt. Lebanon High School in the ’90s. Now Jason is a pediatrician in Mbeya, Tanzania, where he primarily works with children who have been affected by the AIDS epidemic, and John Jr. is a surgeon in Palm City, Florida. John and Connie go down to Florida for a few months every year to visit John Jr. and his family, and to take a much-needed break from their duties as Mr. and Mrs. Claus.

Over the course of the holiday season, the couple makes appearances at numerous public events, private parties, churches, schools and more. They remember every Christmas celebration they have ever attended, and for them, the challenging events are often the most rewarding ones.

“Sometimes we are asked to come to parties for adults, and I always think, ‘What in the world will I talk about with them?’ But then I realize I can always just talk to them like they are kids!” says John. “Several years ago, I was at a party with all adults and I decided to ask them, ‘Of all the Christmases that I brought you toys, which was the most memorable?’ This one older woman spoke up and said, ‘I grew up during the Depression, and one year, you brought me a baby doll. We were so poor. I was so excited. But whenever next Christmas came, my mom asked me to give it up so that Santa could give it to my little sister’ … I always think of that story. It was such a different time.” 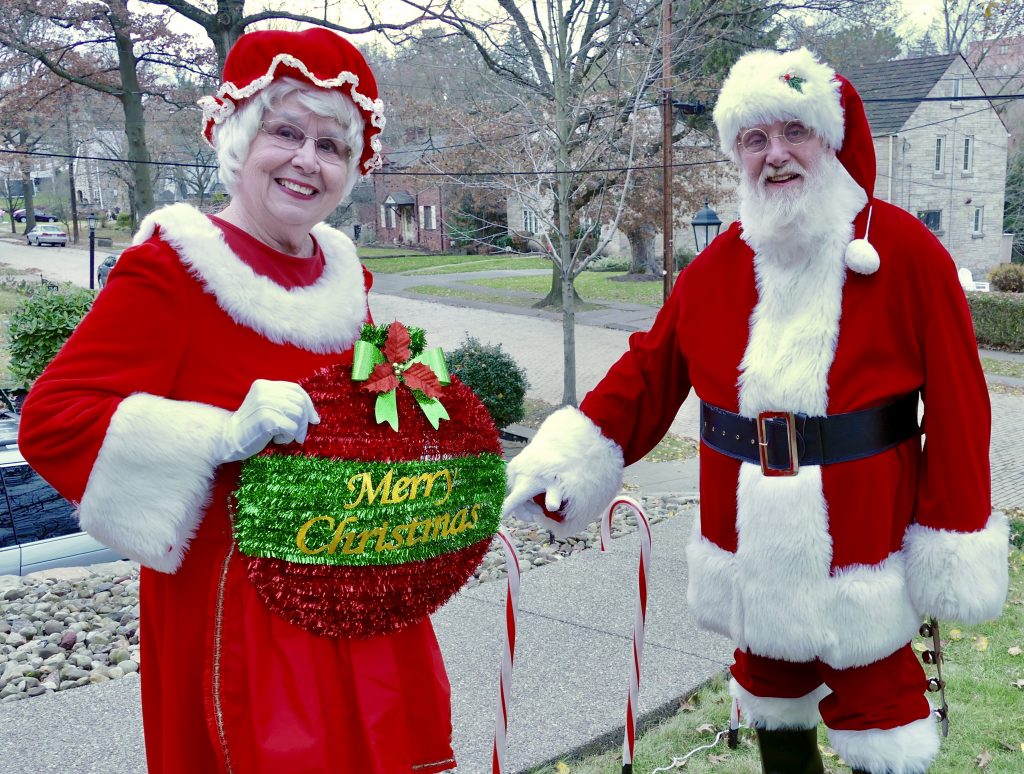 They also frequently look back on a time, years ago, when they got a last-minute call to go to a party on Christmas Eve. They were already fully booked for the day, and they were going to turn it down when they found out that the party was for a two-year-old boy sick with terminal cancer and six months to live. After some creative scheduling, they were able to attend the party (accompanied by their 6’4″ son dressed as an elf), and they laughed, joked and had a ball with the young boy and his friends. At the end of the party, John took him aside and said, “Will you do something for Santa? I’m coming back next year. Can you promise that you will be here?” The boy agreed.

Months later, they ran into his aunt at the grocery store and nervously asked how the boy was doing. To their amazement, she told them that, despite the odds, his cancer went into remission. The Bachas then went back to visit the boy every Christmas for many years.

“Doing this is just so beautiful because of the people we meet and the stories we hear. They are the kind of uplifting stories that you don’t see in the paper nowadays. There really is so much good going on in the world,” says John. “For me, the Christmas season is about bringing joy to boys and girls, and even to adults … It’s wonderful to see love and innocence and excitement.”

“At a time when we are losing touch with each other … Christmas is so important,” Connie agrees. “The Christmas season is different. People are nice to each other. They are in good moods. They laugh. They enjoy things—even work! I wish it would continue into the rest of the year.”

What do you think? Are John and Connie Bacha the real deal? He’s got an authentic beard and a genuine belly laugh. She’s got some serious baking chops. Together, they probably love Christmas more than Buddy the Elf. But at the end of the day, they both don their red suits in the noble pursuit of spreading joy and cheer and happiness—Maybe that’s all it takes to be Mr. and Mrs. Claus?