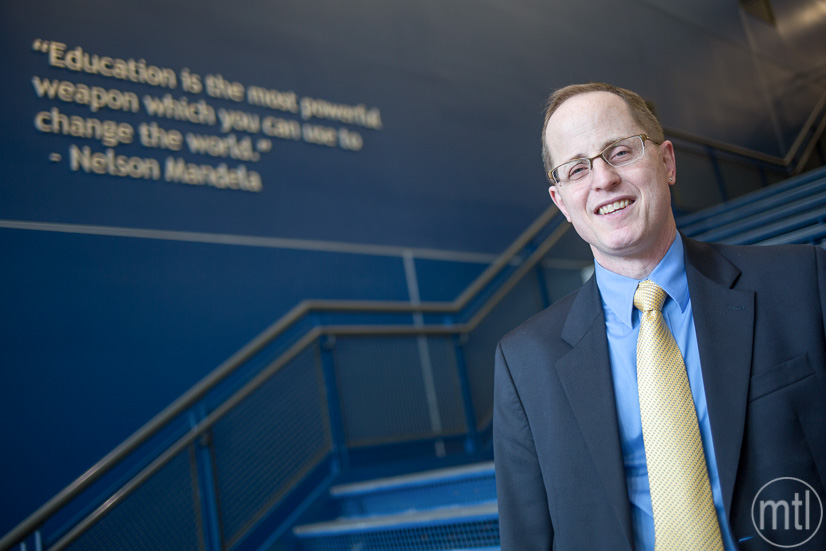 The night before Pete DiNardo was named winner of the community relations board’s annual Community Service Award, he was giving a talk about women as leaders in the civil rights movement, one of three public lectures on lesser known aspects of the movement. His knowledge and passion for civil rights is one of the many important things that DiNardo shares with his students at Mt. Lebanon High School and anyone else who has an open mind, open heart and wants to learn.

Many teachers mentor students, but few teachers consistently mentor an entire community, encouraging people of all ages to step out of their comfort zones and explore topics that are unfamiliar, controversial or unsettling. DiNardo, 52, who has an A.B. from Georgetown University and a master’s and “A.B.D.” (all but dissertation) from Pitt, was nominated for his volunteer contributions to the community by Mt. Lebanon High School Principal Brian McFeeley.

Over the past year, DiNardo has been a leader in the public dialogue over how to make Mt. Lebanon and the Pittsburgh region more diverse and inclusive. That is nothing new—just an extension of the issues he has quietly championed for three decades as a beloved teacher and private citizen. At the high school, he has served on committees that promoted gender inclusion, staff diversification and the social and emotional learning initiative. He participated in Relay for Life, brought one of the Lost Boys of Sudan to speak and raise money to build a water well in South Sudan, and sponsored the first Gay Straight Alliance in Western Pennsylvania.

Outside of the school day, DiNardo organized and hosted a panel discussion among state Rep. Dan Miller, state Sen. Guy Reschenthaler and the Mt. Lebanon Education Association; arranged for numerous presentations by Mt. Lebanon AP U.S. History students at Mt. Lebanon Public Library; rented out entire theaters for viewing and discussing films such as Hidden Figures or Selma; took more than 1,500 students to hear talks after school hours at area universities; coordinated voter drives and education for students, and coordinated the viewing of a documentary on Ferguson, Missouri, after which Mt. Lebanon students and students from city and charter schools participated in a discussion about race and policing in modern America.

When their children, PJ, 23, and Georgina, 17, were younger, DiNardo and his wife, Donna, who live on Mission Drive, were well-known for the Monday night kickball games they organized at Washington School playground, capped off by ice pops. The couple also has initiated a holiday pub crawl that brings together multiple generations and groups of friends and helped plan block parties. Pete takes care of snow shoveling and grass cutting for an elderly neighbor. And in his “spare” time, Pete coached recreation department and travel team soccer for boys and girls, volunteered to tape soccer games and coordinated team dinners for the JV squad.

This is not the first award DiNardo has received. In 2015, he was nominated by a former student and selected as a recipient of the Yale Educator Award for outstanding teaching, which recognized 51 outstanding teachers from around the world. Still, the community relations board hopes DiNardo will view the Community Service Award as validation of the time and energy he has devoted to making Mt. Lebanon a welcoming place for people of all backgrounds. He will be honored at Mt. Lebanon’s Volunteer Appreciation Dinner Wednesday, April 18.