First appearing on Merriam-Webster’s “Words We’re Watching” list in 2017, the term “side hustle” has evolved to describe the work that someone does for supplementary income. When it first entered the English language, in the 1950s, it was sometimes used to describe scams, but now it is just a fun way to talk about the money you make on the side, selling cookies, driving for a rideshare app, picking up hours at the shop down the road or training llamas to do stunts in action movies (We don’t know. Maybe someone out there does that).

We talked with some Lebo residents to hear their stories, and the results were as wide-ranging and unexpected and downright interesting as we could have hoped for. Meet some of the local personalities who are out there hustling and bustling.

Karen Hartman went straight to business school after graduating from Seton LaSalle High School in 1984. She worked simultaneously at BNY Mellon during her transition from community college to Duquesne University, where she studied studio art, art history and French.

“I went with the flow, ‘Let’s work in this business setting!’ and I would find myself drawing or doodling or painting, and then I was like, ‘this is crazy,’” said Hartman. “Art was my passion, and it came through, even though I tried to suppress it with the business.”

Since then, Hartman has enjoyed a successful career as an artist. She took some time off when her three children were young, but as they grew up, she took on more and more work. She taught art at the North Hills Art Center, had her own art studio in the South Side, and was involved in South Arts Pittsburgh. Now, she teaches art at CCAC Allegheny Campus, a position she’s had for several years, and at the Mt. Lebanon Recreation Center. She specifically teaches Art Factory, private lessons and summer camps for the recreation department. 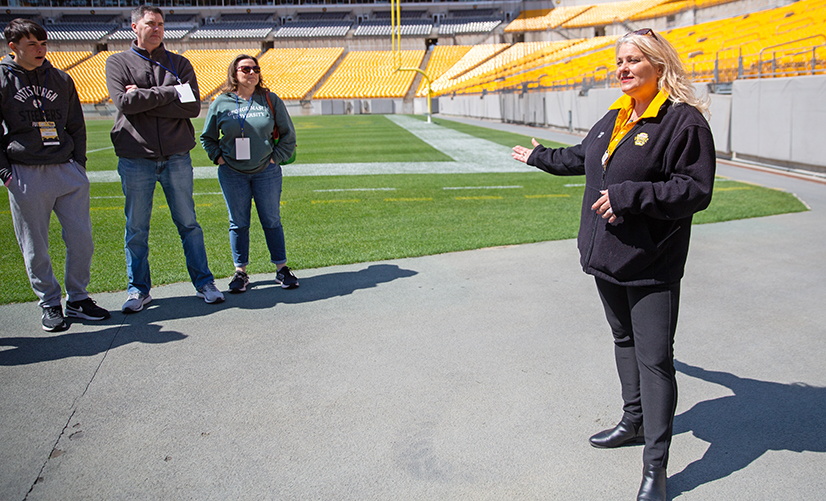 “It’s fun because I get anyone from kindergarten and first grade to 78-year-olds,” said Hartman, a Scott Township resident. “So I have it all in my art career, when it comes to sharing the passion.”

Yet when her kids graduated from high school more than a decade ago, she felt as if something was missing from her life—football. Her son played football and both of her daughters were cheerleaders.

“It was the first year I didn’t have a football season and it felt very strange,” said Hartman. “I had heard that [Heinz Field] wanted tour guides. That was in the spring. Then, when they asked me to do game day, I said ‘yes!’ So I only missed one football season!”

Since then, Hartman has become a game day supervisor, is a tour guide and helps PSSI Stadium LLC at the concerts and other Heinz Field events. It works for her because most of her PSSI job is in the mornings or during the day, giving her time to get ready for her art classes in the evening.

When her colleagues at Heinz Field found out about her artistic abilities, they asked her to paint the logo murals that you can find in the guest service rooms and in other locations around the stadium “with Mr. Rooney’s approval, of course,” said Hartman. These jobs took her several months over the course of two off-seasons to complete, as the porous black concrete walls were difficult to paint.

Hartman was working Top Golf Pittsburgh’s four-day event at Heinz Field in 2018, which was designed to get people excited that the souped-up driving range would be opening in Bridgeville that July, when another side hustle opportunity presented itself. She hit it off with Kevin Craft, Top Golf Pittsburgh’s director of operations, who made it his goal to convince her to join his team part time.

“I told him ‘No, I have too many jobs,’ but at the end of the four days, I was like ‘well maybe…’ So I did, and I’ve been there for three years. I love it,” said Hartman.

Now she’s the shift lead for the guest services department at Top Golf Pittsburgh, which she manages to fit in around her art career and her part-time job at Heinz Field.

“It’s all the same thing between my two side hustles. I just make sure everybody knows they’re going to have a great time,” said Hartman.

Hartman’s advice: “You really have to plan for your vacations or your days off. You have to have discipline, too. But definitely do it, because you get to see a whole different world [compared with] your main job.”