In our last issue, mtl magazine featured an article about the Mt. Lebanon Historic Preservation Board’s quest to nominate our historic neighborhoods for the National Register of Historic Places. So far, more than 4,000 properties have been identified as architecturally significant enough to be possible contributors on the nomination form that asks for details about the age and integrity of the building (is it more than 50 years old and has it remained basically unchanged?) and its significance (is the property associated with events, activities, developments and people who were important in the past and does it have significant architectural history, landscape history or engineering achievements?). 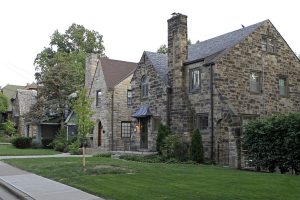 As the Historic Preservation Board moved forward with the nomination process, its members began to wonder what buildings the community would recognize as significant—both architecturally and historically—if they did not have to follow the rules and regulations set by the National Registry.

The board already had some ideas: In 1976, in honor of the country’s bicentennial, the former Mount Lebanon Historical Society recognized 10 century-old buildings and sites with a commemorative plaque. The locations were: St. Clair Cemetery, Scott Road; the Hugh Jackson house, Orchid Lane; the Snyder-Bockstoce house, Shady Drive East; the William Kennedy house, Ridgefield Avenue; the Joseph McCormick house, Kenmont Avenue; the Peter Mink house, Rockwood Avenue; the Samuel Carlisle house, Bower Hill Road; and the George Kennedy house, Dan Drive. Although Washington Road’s Five Mile House and General Store no longer stood, both sites received plaques as well. Since then the Snyder Bockstoce and the William Kennedy house have been razed.

But many buildings were overlooked because they were built after the “century-old” cut off of 1877—the Smith “Castle,” Sunnyhill and the Mt. Lebanon Cemetery Gatehouse are just three.  The house on the corner of Bower Hill and Kenmont, where the seeds of Mt. Lebanon were sown, is certainly significant when it comes to the community’s history.

The Historic Preservation Board would like to know what Mt. Lebanon houses and buildings our readers would choose to recognize—for architectural or historical reasons—if they could. Please send address and a brief description of why you think the building is significant to mtlwriter@mtlebanon.org. A picture of the property would also be helpful.