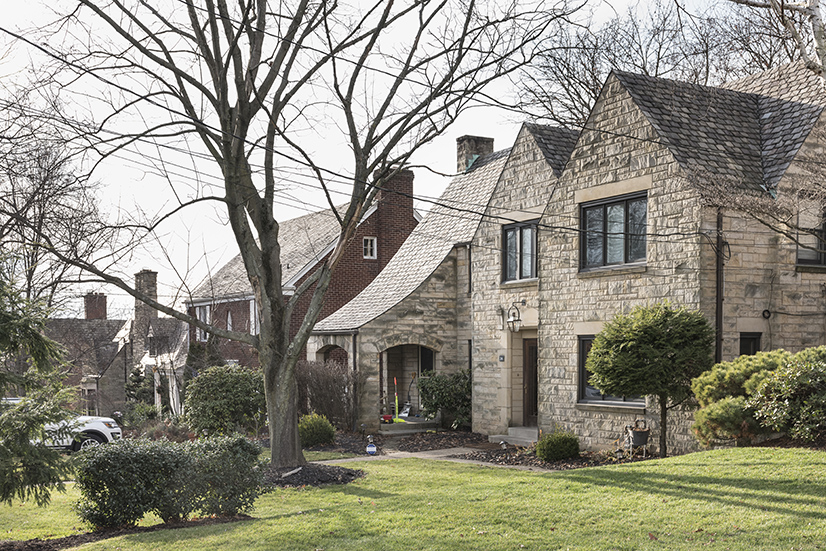 When Megan and Cole Patterson moved to Standish Boulevard last summer—after one visit to Pittsburgh during which they looked at 30 houses—they thought they had acquired a nice new home for their family. They’ve since discovered that the house came with history lessons, a mystery and an unexpectedly warm welcome from their new community.

Over the course of their five-year marriage, the Pattersons had bought and sold five houses, as their careers progressed. But they had stayed in the south, where they were both born and raised. (They’re originally from Alabama, and had been living in Atlanta for the last couple of years.) But when Cole accepted a promotion at Alcoa, it meant moving to Pittsburgh, north of the Mason-Dixon line. Megan was apprehensive: “We had to make the decision without setting foot in Pittsburgh. We’d be leaving our family and friends.”

Before their house-hunting visit, the Pattersons had gotten real estate advice from their friends Michael and Niki Palmer, godparents to Knox, 3, and Nolan, 22 months.  The couple, who had lived in Pittsburgh while Michael played for the Steelers in 2013 and 2014, recommended that Cole and Megan target Wexford and Mt. Lebanon. But the Pattersons’ first day in Wexford hadn’t gone so well.

“The houses were reminiscent of the houses back in Atlanta,” Megan remembers. “Very ‘cookie cutter.’” As Cole attempted to charm his wife that night with a Strip District dinner and a Pirates game at PNC Park, Megan says, “I was very distraught. I was like, ‘I don’t want to move here!’”

The next day’s house-hunting brought them to Mt. Lebanon, and Megan started to reconsider.

“There seemed to be more of a neighborhood feeling here,” she says. “The houses were built individually, and they were built with pride.” They told their real estate agent to cancel any more showings in Wexford: “We just wanted to look here.”

Megan saw the house first: a five-bedroom stone beauty on Standish Boulevard, a short stroll from Washington Road, built in 1938.  Among the aspects that appealed to her: “It was one of the few houses we saw that didn’t have an addition.” Cole visited a couple of days later, and they agreed it was something special. By early July, the Pattersons had moved north. For Megan, especially, the adventure was only beginning.

The charms and the challenges of living in an older house in a colder climate were new to the family. “I had to have snow guards on the roof explained to me,” Megan says. Laundry chutes and the infamous “Pittsburgh potty” were other new concepts. But the Pattersons were committed to keeping the character of the home, and keeping it true to its era without sacrificing modern comforts. And so began their education in pre-war home design.

They were charmed by the old-school built-ins, like the telephone nook by the front door and the dining room china cabinet. Other touches, such as the graceful plaster flower molding above a kitchen archway and the emerald green mosaic tile in the master bathroom, were further indications that the house had been designed and built with exquisite care.

The most recent owners had remodeled the kitchen, but Megan and Cole immediately engaged a contracting firm to re-do the basement family room, mudroom, and two of the three and a half bathrooms. Megan also sought the help of the Historical Society of Mount Lebanon to research the history of their house as well as that of the neighborhood. “We wanted to do right by the house,” keeping as many of the original features as possible but allowing for some leeway: “We want to stick to the 1938 roots, but at the same time I might not want an art deco bathroom,” Megan says.

The couple’s dogged research produced some results but so far has failed to turn up an essential fact: who built and originally lived in their new old house? They have a black and white photo of the house decorated for Christmas 1938 but no information as to who lived there. The county real estate website only lists owners back to 1992. It’s a mystery they’d like to solve.

The remodeling yielded some literal bits of history, however, in the form of a cache of decades-old straight razors found behind a bathroom wall. (Those of a certain age will remember the disposal slit in the back of old medicine cabinets.) The Pattersons also reconnected the gaslight above the front door, which now glows full time to welcome friends and neighbors.

Those neighbors and their new city have been an ongoing source of surprise and delight to the new arrivals. “You hear of southern hospitality. We treat our guests well, but here in Pittsburgh, you’re treated like family,” Megan says.  “It’s overwhelming how supportive everyone has been.”

When they were searching for preschools for Knox, their next-door neighbor, Sheila Fleming, welcomed him to Mushroom Family Learning Center, where she’s a teacher. The neighbor on the other side, Prudence Perri, who raised 12 children in her house, shared home-grown raspberries with the Patterson boys last summer. Corinne Mantheiy, a recent Penn State graduate who grew up in the house across the street, helps out as a nanny while Megan works from home.

“The people here have made it feel like home,” Megan says. “Being away from family and friends, just finding someone to take your kids if you want to have a date night is a big deal.”

And beyond the tunnels, the Pattersons have found much to love as well. “Pittsburgh as a city is absolutely gorgeous. People here celebrate their city, and they want you to love it too.”

Other than being far from family, Megan says, the tradeoffs are few. Dreary winters are a fact of Pittsburgh life, but “for us, the snow is magical. It’s so cool for our kids to be able to build snowmen.” And because of the heat and humidity, southerners spend much of the summers indoors, “but up here, we can sit outside.”

The lush, full-blown cotton plant in the Patterson dining room is a sweet reminder of family roots, but “we are committed to making Pittsburgh home,” Megan says. “What could have been a difficult time for us has been made so much easier.”