Matt Smith and Dan Miller go back a ways. In 2006, when Smith made his first run for the state house, Miller was his campaign manager. Following Smith’s 2012 election to the Pennsylvania Senate 37th District, Miller entered and won the election to fill Smith’s unexpired term.

“I think there’s a nice continuity there,” Smith says.

This has been a year of new challenges for both Democrat legislators. Smith is finding it much easier to get things accomplished in the senate, which, at 50 seats, is less than a quarter of the size of the 203-member house.

“It’s easier to develop relationships,” he says. “Having seen how the house and the senate work, I think smaller legislative bodies not only reduce cost to the taxpayers, but also make for more effective government.”

Legislators in Pennsylvania earn $83,802 per year and are vested in their pensions after five years, but cannot collect on them until age 50.

“In Washington, it seems like the Democrats and Republicans focus on the issues that divide them,” says Smith. “What I see in Harrisburg is that we try more to focus on what we agree on, and work from there.”

While Smith was coming to terms with life in the senate, Miller, winner of a special election in May, had to hit the ground running, bring himself up to speed with a number of issues while the legislature was in the middle of hammering out the 2014 budget—all without having an office of his own.

Smith offered Miller the use of his own office space, and the expertise of his staff to train Miller’s brand-new staff.

“When you win a November election, you have about a two-month lag time before you’re sworn in in January,” says Smith. “In a special election, you’re thrown in right away. We were happy to share our office.”

Miller says with a smile, “My first month in office Matt’s staff saw my own staff more than I did.”

“Matt did a lot of groundwork when he was in the house, and he has connected me with Republicans in his senate district,” Miller says. So I can sit down with Mark Mustio (R-44th) and John Maher (R-40th). 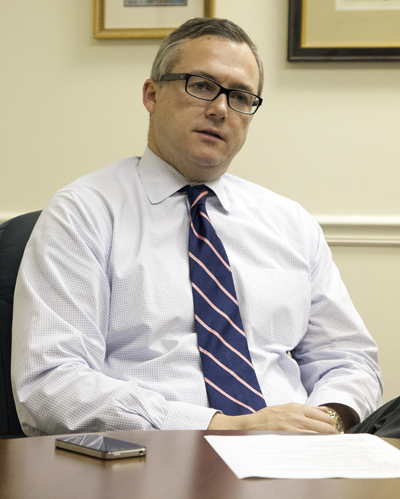 Although Smith finds the climate in Harrisburg more congenial to getting things done, he admits that the level of partisanship has increased with the election of Republican Governor Tom Corbett in 2010.

“It seems like partisanship has really ramped up, especially around certain issues, like education,” he says. “The cuts from the administration have been done without input from all sides, and I hear complaints from school board members all across my district, both Democrat and Republican.”

Education is an issue close to both Smith and Miller. One of Miller’s first acts in the house was to introduce legislation that would require employers to grant family leave for parents of special education children to attend parent-teacher conferences.

“There are whole areas of the state where this is a plague on parents,” he says. “The economy is pressing down on the middle class, a lot of parents are juggling multiple jobs and having to squeeze in time for an IEP (Individualized Education Program) meeting.” 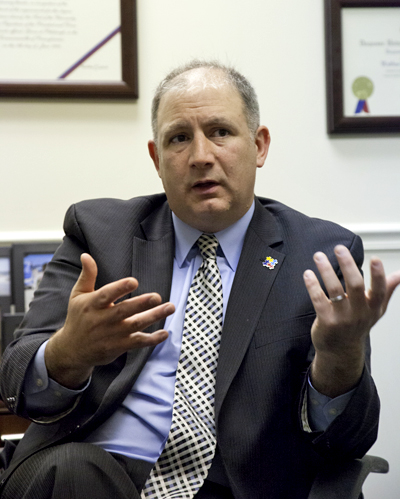 Miller’s initial experience with state budgeting has left him with doubts about the process. “Instead of having a conversation about what we should fund, they say ‘here’s what fits in the budget,’ and leave it at that. It’s funny where some people draw the line on what’s important.”

Smith adds, “When it comes to investment in early childhood education, the return of investment is between $10 and $15 for every dollar invested. So if we should be making any investment, that’s the investment we should make.”

Smith is also sponsoring legislation that would make it mandatory for schools to keep EpiPens, or some epinephrine delivery method, on hand to treat students with food allergies.

“About 25 percent of first-time food allergy reactions happen in a school setting,” he says. EpiPens should be like AEDs (automatic external defibrillators). It would give parents more peace of mind.” Smith praises Mt. Lebanon School District for having the pens available in all schools.

“That needs to be the standard.”

One of the bigger, if not the biggest, concern residents have been voicing is apprehension over the very ugly Highmark-UPMC feud that may impact health insurance in the region. Miller has received so many comments about the uncertain situation that he co-sponsored a bill in which hospitals cannot refuse to accept an individual’s insurance.

“I’m not excited to see us (state government) do this, but we can’t stand by and do nothing when they bring it to the brink. We need a deal done ASAP.”

“We have to that ensure any subscribers are afforded the same access other insurers can provide,” says Smith. “Hopefully it won’t come to the legislature having to get involved, but two nonprofits, which have been built with some assistance from taxpayers, are creating anxiety for individuals, for businesses and for physicians; that’s why the state would involve itself.”

Miller’s election marked the first time in recent memory that both members of the general assembly who represent Mt. Lebanon live here.

“I think that helps us to keep the lines of communication open,” says Smith. “We’re always out in the community, at First Fridays, at Light Up Night, other events, and people approach us. I think the core responsibility of the job is being accessible.”

“I think input from residents is extremely important, and I encourage people to contact me about any concern,” says Miller. Part of the package, though is “whenever my wife sends me out to the Giant Eagle for something, she knows I’m going to be gone about four hours.”

MATT SMITH represents the 37th Senatorial District, which stretches from Sewickley Heights and Bell Acres, south to Jefferson Hills and Peters Township. He is the Democratic Chairman of the Senate State Government Committee. He also serves on the Finance; Community, Economic and Recreational Development; Consumer Protection and Professional Licensure; and the Game and Fisheries committees.

Smith has been named to the Joint Legislative Air and Water Pollution Control and Conservation Committee. He also is a member of the Early Childhood Education Caucus, Military Installation Protection Caucus, Women’s Health Caucus, Bicameral International Commerce Caucus and the LGBT Equality Caucus.

Born and raised in Bethel Park, Smith is a 1991 graduate of Bethel Park High School. He earned a Bachelor of Arts in History from Rollins College in Winter Park, Florida. He returned to western Pennsylvania to study law at Duquesne, where he served on the Duquesne Law Review.

In 1999, Smith began work as an attorney for the law firm of Babst Calland in Pittsburgh, where he served as the firm’s pro-bono coordinator.

He lives in Mt. Lebanon with his wife, Eileen, their daughters, Delaney and Emerson, and son, Jameson.

DAN MILLER represents the 42nd House of Representatives District, which includes Mt. Lebanon, Green Tree, Rosslyn Farms, Thornburg and parts of Bethel Park and Scott Township. He serves on the committees for Aging and Other Adult Services, Children and Youth, Policy and State Government.

Miller earned undergraduate degrees in education and history from Western Connecticut University. As a Team Leader in the AmeriCorps National Civilian Community Corps, he led a team of people in community-building projects throughout the Mid-Atlantic.

After graduating with a law degree from Catholic University, Miller was an Allegheny County public defender, working mainly in the Juvenile Division, and then as an assistant county solicitor.

Miller currently serves as a board member of Outreach Teen and Family Services, a community organization that fosters emotionally healthy teens by providing counseling and educational programs. He served one term as a Mt. Lebanon commissioner. He lives in Mt. Lebanon with his wife, Kim, and son, Cole.