Those of us who graduated from high school a while ago probably remember sitting—a lot—listening to lectures, doing worksheets, reading and taking tests, perhaps in silence. But in Mt. Lebanon High School’s science building; there is very little sitting as students create plastic molds, use lasers to engrave plastic and glass, and sometimes even build robots.

The classrooms, interconnected and with doors wide open, have a palpable energy. Students buzz around tables in several rooms, sometimes walking between rooms, talking, working together and engulfed in their assignments.

When then Building Principal Ron Davis (he’s now assistant superintendent) analyzed a survey of Mt. Lebanon grads, he was pleased to find that Mt. Lebanon students weren’t just good at science, technology, engineering and math (STEM) subjects—they were pursuing them in college and as careers. So in an effort to better prepare students for the careers many were likely to choose, Davis prompted the high school to create an environment where students could become STEM experts, not dabblers. He assembled a team of teachers, and together they created a game plan for what today is the STEM Academy, a certificate program and curriculum track that can begin in freshman year and continue through graduation.

After talking to Physics Department Chair Drew Haberberger and the committee, 10 faculty members in all, Davis says they decided to utilize and expand existing curriculum, encouraging students to select courses that would lead to STEM certification.  To ensure the curriculum was rigorous, the committee worked with teachers such as Andrew Kuskil and Thomas Schultz to craft classes such as Robotics in Power Technologies and a physics course that emphasizes practical applications. Rather than simply grant a certificate of merit, they wanted the certificate to indicate that the students were prepared for serious future study in the STEM fields.

“We want students to have a portfolio of work before even going to university,” says Kuskil, who teaches Applied Engineering 1, a class described in the school’s course catalog as “a sampling of activities which expose students to a variety of design briefs, problem statements and open-ended challenges.” Kuskil calls this class “the spark that lights the fire.” For students who want to pursue the engineering track leading to a STEM Academy certificate, it’s a required course. The other track—students must choose one—is biological sciences, which includes classes such as human anatomy and physiology and AP environmental geoscience. The fields of concentration are equally as challenging, Haberberger says. They hope to expand upon the current program, eventually adding additional tracks.

The program is a team effort, not only because of how it was formed but also because of the integration of various departments and classes. In Schultz’s robotics classes, for example, one student has written the code that controls an autonomous robot’s “brain”—a computer chip that directs itself along a wavy line without any direct intervention. The code, C language, ties in with the AP computer science curriculum.  In another instance, a biology class needed specialized containers for a lab project, and instead of ordering them, asks the applied engineering class to design and make them.

Although most of these courses previously existed, the newly completed science building has created a setting in which the STEM Academy can thrive. The classrooms, interconnected and with doors wide open, have a palpable energy. Students buzz around tables in several rooms, sometimes walking between rooms, talking, working together and engulfed in their assignmentsThe technology equipment—3-D printers, laser engraving, injection machines—is all in one place, and the proximity to other science, technology and math classrooms makes it much easier for teachers to communicate with each other and coordinate lessons.

Davis hopes the program will give kids “a better perspective on their college declaration,” helping them hone in on a pre-med major or an engineering major—or not. The STEM Academy clearly is a boost to college applications. It also may save students money and time in the long run in the form of credits. The school district is working to establish a dual credit partnership with Duquesne University, making it possible for students to graduate from high school with college credits. There are three levels of STEM participation. The most intense level, which yields the certificate, requires two full days of shadowing a professional in a STEM field in addition to 135 hours in an externship, essentially an internship that’s intended to give students a short, real-life preview of a career path in the STEM field. Some of this year’s students  will not receive the certificate because they were not able to enroll as freshmen.  Joey Capan, who graduated last June, left without a certificate. He created a light-up display of the periodic table on a piece of acrylic, by engraving the rectangle sheet with a laser. He then carved a wooden base, installed electric lights to illuminate the acrylic from the bottom, and soldered the cables into the entire apparatus. “I got the parts off of Amazon,” said. When asked why he chose a periodic table, he says, “I love chemistry. I may major in Chemical Engineering.”  His plan was to set up his light-up periodic table on his desk at college.

Another STEM Academy student created a soda cap out of plastic, using the 3-D printer. It fits perfectly over the top of a can of soda, keeping the drink carbonated. Robert Wingold, now junior,  spent more than four months working on the design, trying everything from rubber injection to plastic molds. He created a storyboard of his failures and the evolution of the eventually successful project. 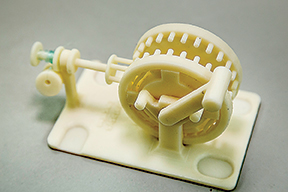 Haberberger has taught physics at Mt. Lebanon High School for more than 20 years, and although he credits the entire team with the formation of the STEM Academy, other faculty members often call him the “director.” He says the program’s mission is to “take what we already do, target specific kids who already show interest and potential,” and then organize those classes into a format that will benefit those students in the real world.  When creating curriculum and projects, Haberberger tries to look at things from the student’s perspective: How and when am I going to use these things?  To him, that’s the foundation of the STEM Academy. “We’re educating in-house—taking what we’ve already been doing, rebranding and then expanding on something great.”

Davis, Haberberger and the other team members’ dedication to moving from good to great should help keep the Mt. Lebanon School District strong in the coming years.

Mt. Lebanon High School Senior Noah Donald was chosen as one of 12 students nationwide and the only student in Pennsylvania to attend the Deutschland für MINTeressierte Workshop (German for STEM Students Workshop). The all expense paid trip to Germany is courtesy of the Foreign Office of the Federal Republic of Germany. Noah was selected from more than 150 applicants vying to win the “Discover a New Path—Explore Germany!” contest sponsored by the German government. The selection and announcement of the winners were made by the Goethe-Institut Chicago, the official cultural institute of the Federal Republic of Germany. Noah will have the opportunity to explore research institutions in the fields of Geoscience, Bionics and Technology. He will learn about the Rosetta mission at the German Aerospace Center in Braunschweig and will meet prominent scientists and researchers while experiencing life as a student in a German STEM excellence school.

“What Noah combines is the intellect and perseverance to carry out research, and the heart to know what research can best help others and have a gentler impact on our planet,” says Mt. Lebanon High School German teacher, Peg Meyer.