“An individual has not started living until he can rise above the narrow confines of his individualistic concerns to the broader concerns of all humanity.”

In September, the Mt. Lebanon Commission unanimously passed a resolution fostering diversity, equity, inclusion and belonging, with a goal of “creating a community of belonging where all are welcomed, included and celebrated,”. The resolution continues the work the municipality began in the 1960s, in the heart of the Civil Rights era, to ensure Mt. Lebanon is a place where everyone feels at home.

It has not been a linear path to get here.

A bit of history

In the early days of Mt. Lebanon’s 1920’s housing boom, the practice of redlining—keeping minorities out of certain neighborhoods either by banks denying them mortgages or by real estate professionals refusing to show the properties to them at all—was common practice for some Mt. Lebanon neighborhoods.

After a Black family testified in front of the Pennsylvania Human Relations Commission in 1964 to say they couldn’t find an agent to sell them a home, it took a year for the Mt. Lebanon League of Women Voters to get the go-ahead to conduct a Fair Housing Study.

The study, sent confidentially to 31 real estate agents, revealed the agents felt caught in the middle of obeying the fair housing act and sellers who would pull houses from the market if the agents showed them to Black people. The quote printed in Merle Jantz’s 1994 Mt. Lebanon Magazine story said study participants frequently said: “Nobody wants to be a pioneer.” At the completion of the study, the League urged action to encourage compliance with the Human Relations Act by creating a community relations board.

The idea was controversial, but the Mt. Lebanon Commission finally created the Community Relations Board in 1966, and directed it to “encourage compliance with all laws, Federal and State, respecting the rights of citizens, to educate the citizenry with respect thereto, to function in a conciliatory manner regarding problems which may arise regarding citizens’ rights; to establish a position of community leadership with respect to all matters of community relations among citizens; and to advise the Board of Township Commissioners in connection therewith.”

In reality, the board was told to find out what the problems were, investigate complaints and then make recommendations to the Commission. The board educated real estate agents and residents about the new laws and gradually gained compliance. For years, the board also embraced the art of mediation, to help solve problems between residents, such as racially motivated fistfights and vandalism.

Tensions rose again in 1985, when the CRB was publicly criticized for not acting swiftly enough, following two cross burnings in a Black family’s yard on Cochran Road.

As a result, the board worked with staff and police to create a statement sent to The Pittsburgh Press:  “Mt. Lebanon, its officials and citizens, will not tolerate intimidation, harassment or any other acts of racism directed at any of its residents. As a community we are committed to preserving an atmosphere open to all those who choose to share in the benefits of living in Mt. Lebanon. Every effort has been and continues to be made to pursue all avenues of investigation to apprehend the perpetrators of the recent acts of hatred against one of our families. Anyone found to be involved in such acts will be prosecuted to the fullest extent possible. Anyone with knowledge regarding any such incidents is encouraged to contact James P. Cain, Manager, or the Community Relations Board immediately.  —  James P. Cain, September 30, 1985.”

The board refocused and redirected its efforts into being proactive. The municipality trained 127 employees and volunteer board members on “Understanding the Psychology of ‘Difference.’” Among the topics were how to listen empathetically and the power of non-verbal communication. The training earned high marks from participants. 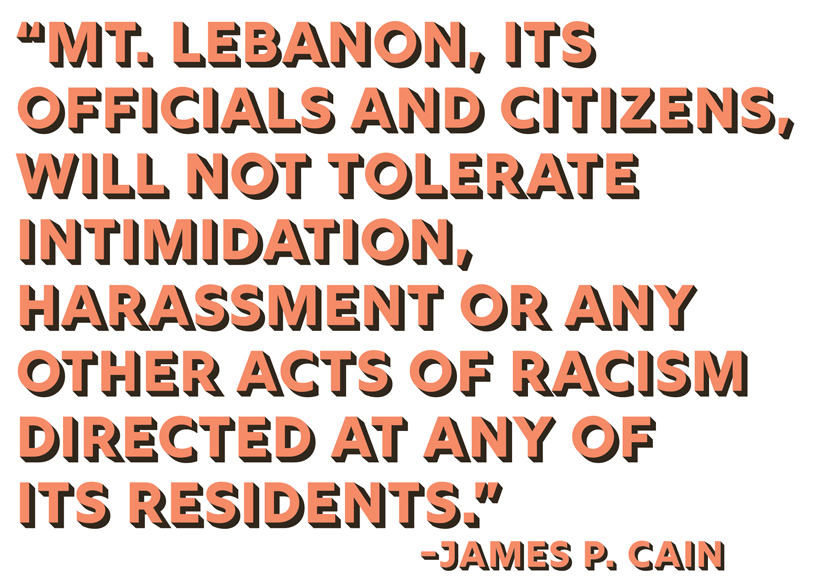 The CRB also distributed a pamphlet to all residents, municipal employees, civic organizations, newcomers and members of the public, explaining the CRB’s role.

“Mt. Lebanon is a community made up of people of various ethnic, racial and religious backgrounds, and of many age and special needs groups—an uncommon diversity in a suburban community,” the pamphlet said. “The Community Relations Board represents Mt. Lebanon’s commitment to assuring fair treatment for all people who choose to live in this community, no matter what their race, creed, color or national origin.

The CR Board is an arm of the municipal government. The primary objective of the CR Board is to encourage compliance with all laws respecting the rights of citizens.

Race was not the only topic the board focused on. Other issues of the ’80s were the unavailability of childcare before and after school, as well as concerns from Jewish students needing to take holy days off from school and senior citizens needing help with transportation and household tasks.

Since the ’80s, the CRB has continued the conversation by holding diversity forums and educational events, as well as mediations to help residents through tough patches. The goal became not just legal compliance, but creating a more welcoming community.

One of the most popular events was “Diversity, Discrimination, Inclusion. Where Are We Going? Where Have We Been?” The 2006 forum included candid conversations with residents from underrepresented groups, including racial minorities and families with mixed races, non-Western cultures, people with disabilities, religious minorities and LGBTQ residents.

In 2008, the CRB sponsored a Board and Authority Fair, to recruit diverse members of the public for volunteer positions. In 2014, it presented “Finding Help in Mt. Lebanon: A Living Better Forum,” which connected residents with agencies and organizations that provide medical, mental health, substance abuse, hospice and senior care services. In 2016, it co-sponsored the Unity in the Community rally at the Recreation Center in cooperation with State Rep. Dan Miller, after several reports of bigoted acts in the community.

Although the public’s relationship with Mt. Lebanon police has been good, the country has witnessed high-profile cases where unarmed Black people were shot by police, or died in custody. Most notably, the June 19, 2018, death of Antwon Rose Jr. in East Pittsburgh and the May 25, 2020, murder of George Floyd in Minneapolis, motivated many to make a public stand. More than 800 people participated in a peaceful demonstration on Washington Road after Floyd’s death. Mt. Lebanon police ensured all protestors could safely exercise their First Amendment rights by closing the roads and blockading intersections, while keeping a low profile to ensure the participants did not feel intimidated by their presence.

At the same time, the Mt. Lebanon Commission wanted to ensure that diversity, equity and inclusion were top priorities for the municipality. On January 4, 2021, the Commission created a diversity, equity and inclusion ad hoc subcommittee of the Community Relations Board to serve for one year. The 36-member committee was divided into four working groups to develop different goals: Community Awareness/Community Building; Diversity in Boards and Hiring; Police Engagement and DEI Recognition, Event Planning and Incident Response. Later that year at its goal setting retreat, the Commission named DEI as one of its top projects for the year and assigned staff as liaisons to each of the four groups.

With a large task at hand, each of the four working groups created even smaller committees to research what was needed to implement the recommendations. In October, 2021, the groups presented their recommendations to the Commission and the public. Some of the suggestions were already in progress at the time of the recommendations and others could be quickly achieved.

Some of the tasks completed before, during or after the presentations:

That left some of the subcommittee’s larger initiatives to be considered. The Commission sent a list of recommendations to a newly expanded Community Relations Board (which now has 11 members, up from the original six at inception). Among the suggestions are conducting a community-wide climate survey to create a baseline for improvement; implementing monthly DEI event recognition/activities; working with the public information office to ensure marketing materials and the website effectively promote DEI values; developing DEI training for staff and volunteers; and working with the police chief on ways to proactively and regularly engage and solicit input from residents.

The CRB is currently ranking those recommendations for further consideration for funding and implementation.

But one recommendation appeared on all four working groups’ list: Put DEI on paper. Make a statement. Let the public know that the municipality is dedicated to this mission.

Manager Keith McGill created the first draft, which the Commission considered, and gathered input from the CRB. The Commission adopted the final resolution on September 13, 2022, and it has since been communicated to all staff, volunteer boards, to partner agencies …  and to you, in this article.

WHEREAS, human diversity can be defined as actual or perceived differences in race; color; ethnicity; religious creed or spiritual commitments and practices (or lack thereof); national origin, language, or place of birth; citizenship and immigration status; ancestry; gender or sex (including gender identity or expression, and pregnancy and related medical conditions); sexual orientation; physical, intellectual, learning, or mental disability; political beliefs; medical condition or history, or genetic characteristics and family medical history; neurodiversity; age; military or veteran status; socio-economic or public assistance status; family or marital status; or domestic violence victim status; and all these vast diversities exist among and between people everywhere; and

WHEREAS, The Municipality of Mt. Lebanon has, at the heart of its vision and mission, a commitment to help create a community of belonging where all are welcomed, included and celebrated; and

WHEREAS, the Municipality of Mt. Lebanon recognizes diversity, inclusion and equity as essential to a positive and healthy community; and

WHEREAS, the founding principles of our nation set forth the fundamental ideals of equality, equity and inclusion; the basic right of people to life, liberty and the pursuit of happiness; and equal protection as expressed in the United States Constitution; and

WHEREAS, the Municipality of Mt. Lebanon values the multifaceted ways embracing diversity enables it to be a welcoming and inclusive place to live, work and enjoy life; and

WHEREAS, the Municipality of Mt. Lebanon does not discriminate in public accommodations; the Municipality welcomes all people to its places of work and service with the goal of creating a culture that welcomes everyone, resulting in a feeling of belonging at Municipal public facilities and events; and

WHEREAS, the Municipality is committed to promoting equity by calling upon the knowledge and experience of its employees and community members, especially those who serve in advisory capacities as members of the Municipality’s Boards and Authorities; and

WHEREAS, the Mt. Lebanon Commissioners, Municipal Administration and Municipal Employees are committed to supporting and participating in training opportunities as they pertain to best practices in diversity awareness, equity, workplace harassment prevention, employment law and disability awareness and acceptance.

NOW, THEREFORE, the Mt. Lebanon Board of Commissioners does hereby resolve:

BE IT FURTHER RESOLVED, that

BE IT FURTHER RESOLVED that the proper officers and officials of the Municipality are authorized to take any and all other actions that are necessary or convenient to implement this Resolution including by making budgetary recommendations, observing contracting requirements, obtaining legal reviews, working with collective bargaining units and preparation of additional Commission and other person or entity action items, all where necessary or appropriate to advance the goals and objectives of this Resolution.