The 216-room Bedford Springs Resort has a fascinating history, including serving as President Buchanan’s summer White House and housing a naval training school for radio operators during World War II. Today it offers amenities for the whole family.

Early on a Sunday morning, 46 adventurers gathered in a parking lot by the high school. Climbing up a half-dozen bus steps, they settled into perches elevating them higher than any driver of the 18-wheelers they would encounter on their upcoming trek. Another road trip with the Mt. Lebanon Recreation Department had begun.

The group was a mix of middle-aged to older adults with a little over half of them from Mt. Lebanon. There were couples, friends, several solo travelers, and even a father-daughter duo. The $117 per person trip had two highlights. First up was breakfast at the Omni Bedford Springs Resort.

Myers Coach Lines’ Brad Stroud set a jovial tone, commenting on the “classiness” of the crowd and giving himself an on-the-spot promotion. “I am no longer the bus driver; I am the senior executive motor coach concierge.” He assured folks they were in for a treat, and his prediction proved accurate.

Long visited by Native Americans for their healing qualities, the eight mineral springs in the Bedford area intrigued local physician John Anderson, who in the late 1790s bought 2,200 acres and began using the water in treating his patients. The area’s reputation grew, and Anderson soon built a hotel to host all those arriving to take the cure. He continued to expand, adding more lodging and eventually one of the first golf courses and indoor pools in the nation. Bedford Springs enjoyed decades of heady times as a world-class destination. 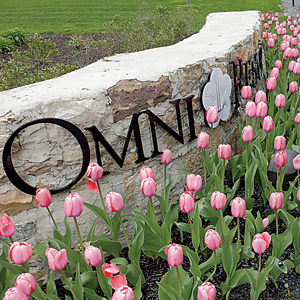 By 1984, Bedford Springs was designated a National Historic Landmark, but the resort had fallen on hard times.  It closed in 1986 and sank into disrepair. Completed in 2007, a three-year, $120 million renovation has allowed guests to once again swim in the spring-fed indoor pool, hike 25 miles of trails, play golf, and enjoy a variety of luxurious spa treatments. Purchased by Omni Hotels in 2009, it is designated a AAA Four-Diamond property.

And that rating extends to the food. The buffet breakfast was delicious. Even the take-it-or-leave-it folks were raving about the scrambled eggs, bacon and sausage. Afterwards came a leisurely tour of the main area and the gift shop. Frank Hynds, Bower Hill Road, had a personal mission, checking things out for the benefit of his son Stephen, whose fall wedding will be held there. Then it was time to move on.

Lisa Wuycheck from the Rec Department does the trip planning and acts as chaperon. She plans day trips to areas and attractions that are usually no longer than five hours away. The prices of the previous half dozen trips ranged from $79 to $139.  “The trips have been extremely successful, and we have many repeat customers,” Wuycheck says. Recent destinations have included Oglebay Resort and Conference Center, the Chautauqua Institution and Nemacolin Woodlands. Farther afield have been Washington, D.C. and Atlantic City. There have also been backyard jaunts to Pittsburgh’s Strip District and Sewickley. “I am always open to new ideas for trip destinations,” says Wuycheck, who encourages anyone to call her  at 412-343-4528 with suggestions or to be put on the mailing list.

After Bedford Springs came a short ride to Cumberland for a train excursion featuring Mountain Thunder, the premier steam engine of the Western Maryland Scenic Railroad. The weather was perfect for the round trip from Cumberland to Frostburg, about an hour each way, curving around beautiful mountain scenery and through a long tunnel. Veteran conductor Jim May looked every inch the part as he punched tickets, while newly minted conductor Heather Warnick gave an informative narrative. In Frostburg, the engine executed a gloriously noisy turntable turnaround to position it for the return trip. Gift shops and eateries at both stations fed culinary and souvenir appetites. Legal secretary Linda Curtis, Morrison Drive, was especially pleased with the group interaction on this outing. A solo traveler, she is one of the “regulars” and says she would have taken even more trips but,  “I sent my check in too late and they were filled up.” So book early.

Retirees David and Cecelia McKibben, Longridge Drive, are also regulars. A bus trip with Lenzner Coach Lines to the Philadelphia Flower Show got them hooked about a decade ago.

“We got lazy at driving,” says Cecelia, “and this is great.” She and David like to claim the far back seat to relax and take in the scenery.

Upcoming rec department trips include a $65  Monday, September 22 tour of the Capitol building in Harrisburg and then on to Hershey for a chocolate fix. On Friday, October 3, $33 will pay for a trip to the Franklin Apple Fest with craft vendors, a classic car show, and farmers market. On Saturday, December 6, for $145 it’s a journey to Amish country for traditional eats and a performance of Moses at the Sight & Sound Millennium Theater in Lancaster.