Sweat builds on the tennis player as he waits in the sweltering heat for his opponent to serve the ball. Bouncing foot to foot with his racket in hand, the athlete hears the soft bounce of the ball on the clay court and the grunt of his opponent before seeing the yellow streak fly towards him.

From July 1 to July 6, about 100 players will compete in the collegiate part of the National Collegiate Clay Court Championships West Penn Amateur in events including men’s singles, men’s doubles, women’s singles, women’s doubles and mixed doubles. The tournament has opportunities for both college and high school players from the northeast.

The USTA Pro Circuit added Mt. Lebanon’s clay courts to the schedule of tournament locations 13 years ago. This year the professional level tournament begins July 2 and ends July 7. Out of the 64 players competing this weekend, 34 individuals and 16 doubles teams will qualify for the tournament. The winner of the tournament receives tournament points and prize money.

Players to watch for during the professional matches are Christian Harrison, younger brother to professional player Ryan Harrison, from Shreveport, Louisiana; Chris Mengel, number one player for Duke University Men’s Tennis, from Pittsburgh; and A.J. Catanzariti, who reserved a wild card for the World Tour, from Mt. Lebanon.

But Hackett says you never know how things will end up; players can surprise the audience. Several athletes from this tournament move on to “Grand Slam events,” Hackett says. One of the joys of coming to the tournaments is seeing the younger players, many locals, who might move onto world tours, Hughes says.

Hackett believes the Mt. Lebanon Tennis Center has the nicest courts around. “I’m biased of course,” he adds. But, Hackett mentions how players from around the world come to the clay courts and think the center is a club instead of a public facility that is constantly packed with players of all levels. 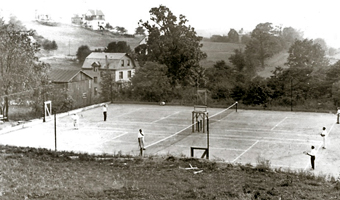 With 12 Har-Tru clay courts available during the warmer months and six clay courts covered for athletes to play on for the winter, the Mt. Lebanon Tennis Center’s amenities are rare in this country. European players grow up on clay courts but few Americans have the opportunity because maintenance of these courts is difficult and costly, Hackett says.

Clay Courts are easier on the body than hard courts, such as asphalt, that make players sore by the end of a match. Playing on clay courts is a completely different game because the ball moves slower and bounces differently, leading to a sport that is more about strategy than hitting hard.

To join the fun, sign up by noon on June 29 to play in The National Collegiate Clay Court Championships West Penn Amateur. And make sure to stop by and greet Dan Hackett, who will be stepping down as tournament director after 13 years in the position. (See the September issue of mtl for details).

The tournaments are sponsored by PNC. To learn more and keep up on the statics visit: www.mtlebanontennis.com.