After our Facebook page blew up with positive comments on our post about the smiling, saluting traffic control worker on the Columbia Gas project on Cedar Boulevard, who lifts the spirit of even the crankiest drivers, a few readers asked us to write about him.

Charles Smith walked into our office Tuesday morning wearing a brown sweater–he couldn’t wear his normal suit, as he’d come from work and needed to go back in a few hours. But nothing could stop him from showing at least a little bit of his signature style; his bright brown snakeskin dress shoes shone, despite the lack of light indoors and the cloudy, dull day. But it’s possible that his shoes reflect a different light source: Smith’s smile, aura and bright personality. He’s a traffic controller contracted through M. O’Herron Company, by Columbia Gas of Pennsylvania, and if you’ve driven down Cedar Boulevard recently and past Beadling Road, then Smith’s probably done his best to brighten your day too.

Smith is well known for holding the stop/slow sign at active work sites while smiling, waving and saluting each and every car that passes through. He wears a terrible towel on his waist. Sometimes he wears a flashing Steelers hat. That big, gregarious smile follows every car passing through his work zone, regardless of the driver’s attitude.

“I salute every car that goes in both directions. In the military, when you go on and off posts, that’s the way officers wave cars on and off. I modified it a little bit but basically that’s where I got the idea from.” Smith served four years in the Army at Fort Knox, Fort Jackson and Fort Dix. Smith, who lives in Cranberry, has been working for M. O’Herron Company for close to six years.

What’s great about the job?

“When you get a chance to interact with people who can come through the work zone safely without taking you down verbally or gesturing, I think it’s great. Also being there, especially with a good crew–there’s always laughter going on–those are some of the things I embrace.”

But is it always a good day?

“Oh yeah, most of the time. If it’s not good, by the end of the first day I’m there, it is good. Because I’m always gonna behave that way. We’re going on, we’re joking, we talk about Steelers’ football.” Smith’s chuckle fills the room. He’s a big Steelers fan. And his light-up Steelers hat, along with his friendly demeanor, aren’t just for looks.

“See, what happens, is sometimes, if it’s early in the morning or late at night, you want visibility. And that blinking light gives me what I need. Sometimes people really aren’t paying attention, so you really have to wear protective clothing with florescent striping and anything else that’ll make them look up and say, ‘Oh, there’s somebody over there!'”

Senior Communications and Community Relations Specialist for Columbia Gas of Pennsylvania, Brynnly Schwartz, chimes in. “The salute and the wave actually serve–not only are you being friendly–but as a safety gesture, because people have to slow down to see you and wave back. So Columbia Gas appreciates that a lot.”

“Also, if they’re coming through the zone too fast, you have to slow them down,” Smith says. “There’s a different signal you use to slow them down. Sometimes, if you don’t slow a person down that comes through fast, that same person will come through fast every day, at least twice a day. So you want to be sure that you maintain a nice speed that’s comfortable, one that gives people reaction time.”

Smith works eight- to 10-hour days, sometimes longer, depending on the day’s progress, and keeps his spirits up the whole time. “When you’re on the job for a week or so, you have a tendency to see the same cars coming every day and you can actually predict. If you see a certain gray car coming down the road, you know, ‘this lady’s going to smile’ or ‘this lady’s going to wave.’ So you have anticipation as well; that’s how you keep the day going.”

But not everyone waves back. “I don’t try [to make them respond]. There’s one lady who has a Jeep and a San Francisco sign on the front of her car. She’s really nice, but she doesn’t wave. She’ll look but she won’t wave and I just smile, because I know: I’m on the other team, I’m the enemy. She has that San Francisco license plate so she’s a 49ers fan.”

He laughs. “But then, if you’re there for more than a week or two, people gradually come around. But there’s some that just aren’t going to [wave]. They refuse to. When they do that, especially if they’re really cranky and they verbalize it, I smile. Depending on how incited they are, sometimes they can really lay you down and that makes me laugh. You can see them looking back in the mirrors to see what my response is, too, and they see me laughing or smiling.”

“Oh, the next day they may avoid the work zone because I’ll recognize that particular car. But the day after that, they’ll come through and they’ll be smiling. Or waving.”

It seems even the Grinch wouldn’t hold up against Smith’s optimism.

“They realize it’s not my fault. The work has to be done. If there was a better way, it would be done differently, but sometimes you have to slow [traffic] down just to get it done.”

Smith has loyal fans of his own. “Some of the cars stop and they ask you how you’re doing. One gentleman comes by everyday and gives me hand warmers, coffee, cocoa. It’s just amazing–the whole community.”

Schwartz elaborates, “We actually got an email from a schoolteacher in the Bethel Park School District, who goes down Cedar every day. It was just a very nice, complimentary email about Charlie; she tells her second-grade class about him, and she actually drives that way to see Charlie in the morning, on purpose. She doesn’t have to go that way. Just to hear that, to hear someone say, ‘Oh I’ll put up with the traffic because he makes my day,’ is really mind-blowing.”

His enthusiasm for life spills over, not surprisingly, into everything he does. He jests with cashiers, waiters and anyone around him. “I call it creating Kodak moments. Some people have a good sense of humor and some of them don’t. The only thing is, you gotta have some fun.” 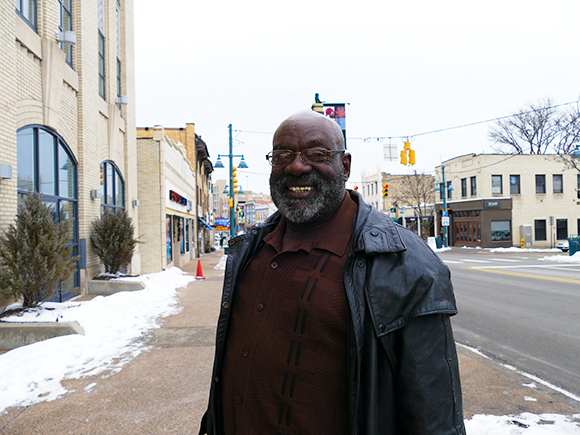 He doesn’t let the bad days get him down.

“Well, I try not to think about it. Even with a bad day, and sometimes I’m low with myself, the rapport I receive from people coming through the work zone is uplifting. If what’s troubling me comes back, I just have to find another vent. Because I don’t want to think about it or dwell on it, because it works into you, it eats at you.”

When Smith’s on the job, it’s not just drivers and himself that are thrilled. His coworkers love having him around and trust that he has traffic under control, which makes their job a lot easier. “Some of the jobs I go on, I hear the guys exclaim “Charlie!” when I arrive. Because they can get a lot more done if they don’t have to keep looking up. It slows the work down almost to a screeching halt if you have to keep looking up all the time. If you know there’s somebody on the other end that you trust is going to really have things in order, you can concentrate and get a lot more done.”

His inspiration comes from a likely source. “My mom always told me, ‘Work 110 percent and that’ll always keep you busy.’ It doesn’t matter what field you’re in. I’ve embraced that concept. The first job I had, when I grew up in Hazelwood, was cutting weeds for the city. It was a summer job and I remember we got $62 every two weeks. So everyone was planning: we were going to buy new tennis shoes, different outfits and stuff. The day before payday, my mom said, ‘Don’t cash your check; bring it home. We’ll go to the bank together.’ And I brought the check home, sat down at the table and she had this list. ‘Room and board,’ it had all sorts of things on it, and she started explaining what the responsibility of having a job really means. And by the time I got finished with all that, I had just enough to go skating. I was salty, I didn’t believe it. I went skating but I didn’t get the chance to involve myself in all of the purchasing of new clothing or shoes and stuff. And she said, ‘You can’t live free, son. You have to earn your way.’ That was a rude and terrible lesson, but I learned it.”

He’s thankful to M. O’Herron Company for providing him with a job and to Columbia Gas of Pennsylvania for contracting him for this project. “And most of all, I want to thank the people in the Mt. Lebanon community for embracing me when [the delays are] just unbearable at times. To still have that many nice people is amazing; it’s incredible.”