The Army’s 84th Infantry Division was one of almost 100 combat divisions that saw combat in World War II. Originally an Army Reserve division with most of its members from the Midwest, the 84th was activated for combat in 1942 and drew troops from all over the country. The division fought in Europe from November 1944 until the German surrender in May 1945.

In the small central Virginia town of Bedford stands the National D-Day Memorial, dedicated to the courageous men who stormed the Normandy beaches on June 6, 1944. The town is honored with this national monument because 19 of the young men of the 29th Infantry Division’s 116th Regiment who were killed that morning were from Bedford.

Every community pays a heavy price for wars fought to preserve our freedom; Mt. Lebanon is no different. On a smaller scale, Mt. Lebanon mirrors the tragic experiences of Bedford. Five young Mt. Lebanon men found themselves in the 84th Infantry Division, which saw combat in Europe in the final year of the war. My father, Anthony Paul Good Jr., was one of them.

When my father passed away in October 2008, my children asked me about his experiences in World War II. Dad, like most combat veterans, would say very little about these times. However, through his limited comments, letters he sent home and extensive research, I have been able to piece together where he was, what he did, and a fraction of what he experienced during those most difficult times. It is quite a story.

Dad grew up on Inglewood Drive and graduated from Mt. Lebanon High School in winter 1942, just months after the attack on Pearl Harbor. He briefly attended Carnegie Tech (now CMU) before he was drafted into the army. After basic training in Texas, he was accepted into the Army Specialized Training Program (ASTP) program.

ASTP was a college education program sponsored by the US Army at the beginning of World War II. The program accepted only high school graduates with very high IQs; the minimum IQ was 120, compared to 110 for Officers Candidate School. ASTP promised soldiers an accelerated college education, and upon graduation they would become Army officers. Dad was one of about 200,000 soldiers sent to 225 colleges across the United States to study engineering, medicine, dentistry and 34 different foreign languages.

On February 18, 1944, the War Department unexpectedly announced that ASTPers would return to line duty by April 1. Most of these men went into infantry, airborne and armored divisions that were still in the US, training but scheduled for shipment overseas. In April 1944, the 84th Infantry Division at Camp Claiborne, Louisiana, received 2,800 ASTP men, who were distributed among three infantry regiments (333rd, 334th and the 335th) and given five weeks specialized training. Dad was assigned to the 335th Canon Company.

Four friends from Mt. Lebanon High School also found their way to the 84th Infantry Division, known as the Railsplitters. Rolla A. Miller was placed in F Company of the 333rd. Ed Housley became a medic with the 335th Medical Detachment and Chuck Casper was a medic with the 333rd Medical Detachment. Bill Johns was assigned to I Company 333rd Infantry. These five Mt. Lebanon sons would spend 152 days in three major campaigns—the Rhineland, The Ardennes and Central Europe. The Railsplitters would suffer 7,260 battle casualties including 1,468 killed in action. The toll for Mt. Lebanon was steep.

The Rhineland campaign sent the 84th to crack the Siegfried line, a series of interlocking pillboxes, troop shelters and command posts. The 335th Regiment was ordered to take the German town of Lindern and the high ground code named Toad Hill. G Company of the 335th attacked. Ed Housley was wounded while giving aid to a wounded soldier.

My Dad told me that Cannon Co. was called upon to support the attack. “We were moving up in support of 3rd Battalion, when I saw Ed Housley being brought back on a tank,” he said. “He had a hole in his chest big enough to put your fist through. I thought that he was dead. Later I found out that he had survived.”

From there, the 84th was sent into the US Army’s largest and most costly battle, the Battle of the Bulge. The 84th was ordered to hold the road network around Marche at all costs. For three days, the Railsplitters found themselves alone without support on their left flank, above Hotton, and nothing on their right flank, below Marche. The 84th was “out in the breeze,” an island of resistance facing overwhelming German armor. Here they battled German armored divisions that included the 2nd SS Panzer, 116th Panzer, and Das Reich, a Waffen SS armored division. 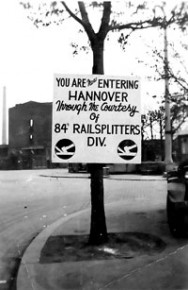 The situation was perilous; no one knew the enemy’s strength, movements or location. The 84th was directly in the path of the oncoming German Second SS Panzer Division and the 116th Panzer Division with orders to hold at all costs. My father, a forward observer, was sent to locate German armor and troop concentrations and radio back to the artillery of Cannon Company. The lines moved so quickly that by Christmas Eve, he and seven others were cut off behind enemy lines for eight days as the battle raged.

In December 1944 and January 1945, the snowstorms and freezing temperatures in Belgium were as dangerous as the enemy forces. Trucks had to be started every half hour to keep the oil from freezing. Turrets on tanks froze, rendering them inoperable, as did the weapons carried by the infantry. Casualties from exposure rivaled those from the actual fighting. Many young GI’s suffered from frozen feet as they stood their posts in little more than leather boots and an overcoat. And when medics were pinned down by German fire, the wounded would freeze to death in the snow.

During the Battle of the Bulge, Bill Johns suffered from trench foot and was evacuated, and on January 12, 1945, Rolla Miller was killed in action, leaving only two of the Mt. Lebanon men in the 84th.  Six days later, on January 18, 1945, the 84th Infantry was taken off the line and sent for a rest and refitting. They went to Herleen, Holland—a behind-the-lines staging area for the Roer River crossing, their next major campaign.

The 84th was now to become one of the spearhead divisions in Operation Grenade, the crossing of the Roer and the drive to the Rhine River. The Railsplitters moved up to the crossing point under the cover of darkness. They were ordered to remove all divisional insignia so that the Germans would not know the powerful force that would lead the attack. On February 23, 1945, the 84th crossed the Roer in assault boats and on footbridges under heavy enemy fire.

The next day, they penetrated the German lines, took the city of Baal and continued their drive towards the Rhine, a drive that would take the life of another Mt. Lebanon son. On April 9, 1945, a task force of the 84th’s 333rd regiment was just outside Hanover in the small town of Weetzen. By nightfall, the advancing column was placed under accurate and deadly artillery fire that could have only been directed by a German observer within the town.

It was here that Chuck Casper, although grievously wounded, refused evacuation and instead stayed to direct others in rendering medical aid to wounded GIs. He was the last man to leave the makeshift aid station, and sadly, died before he could receive medical treatment for himself. For this heroic action Charles Casper was awarded the Distinguished Service Cross, which is second only to the Medal of Honor for courage under fire. 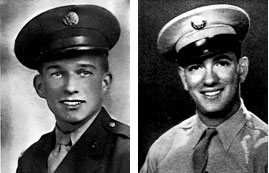 The cost to Mt. Lebanon could have been higher. Although my father survived, it was, as he used to say, “just a matter of dumb luck and time.” In a letter he sent home, he described his incredible luck: “You know in the 335th we had about 85 percent casualties, and I didn’t even get scratched. Of course, I’ve had my share of close calls like when a piece of shrapnel put a hole in my steel helmet and came out the other side. An inch either way, or all I’d have was a white cross with the words ‘killed in action.’ As it was, all I got out of it was being knocked out for five minutes and a headache.”

During the Battle of the Bulge, my father was hit by shrapnel, taking with it a small piece of his shin. He limped back to the battalion aid station and after being bandaged, refused the paperwork that would have entitled him to a Purple Heart. He felt the other more seriously wounded deserved that honor.

Of the five young soldiers from Mt. Lebanon, two were killed in action, two were wounded and only one—my father— would come back home unscathed, not withstanding the horrific memories of 152 days of combat that he simply refused to talk about.

Mark Good is a 1973 Mt. Lebanon High School graduate and a 1977 graduate of Rochester Institute of Technology. He, along with his brothers, own and operate P. C. McKenzie Company—a company that supplies compressor packages for refueling natural gas powered vehicles. He lives and works in Upper St. Clair.