The new Artsmiths of Pittsburgh sign is about 10 feet long, five feet tall and the weight of a grown man—too heavy for one person to lift.

Edward Avenue resident John Walter, owner of Iron Eden, has been working on the 200 lb. sign since the Artsmiths’ founders approached him with the design about a month ago.

Along with the finished logo, which will be displayed on the roof of the new Artsmiths of Pittsburgh location, Walter will also display his works—such as garden ornaments and home decor pieces—at the new Artsmiths location.

The Artsmiths of Pittsburgh is a collaborative project between the owners of Rollier’s Hardware, 600 Washington Road, and Koolkat Designs, previously located at 691 Washington Road.

The group hopes to open the creative space for live events, artist galleries and food vendors at the red barn at 1635 McFarland Road, in July.

For now, the logo is still located at Walter’s workspace, Iron Eden, in Bloomfield. The site includes a large shop with a rooftop, a shed and a two-story barn. Everywhere there are iron wild flowers and metal birds perched as if they’re about to dip down and peck at an invisible prey, or squawk at a passerby. 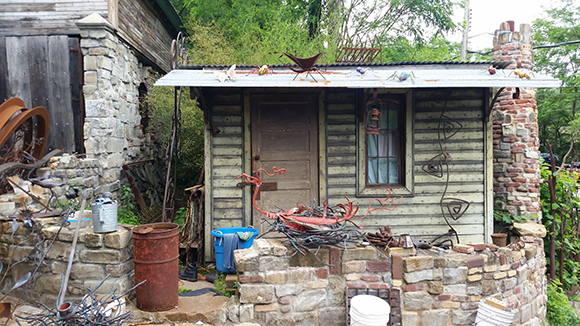 The name, Iron Eden, compliments the lush greenery surrounding the location and Walter’s own artistic tastes. “I thought the name was cool and it reflected what I was into at the time,” Walter says.

Kate McGrady, owner of Koolkat Designs, said the Artsmiths group contacted Walter because they were familiar with his unusual and creative works—just the type of style they were looking for in the new logo. “He is uniquely qualified to do this project,” McGrady says. 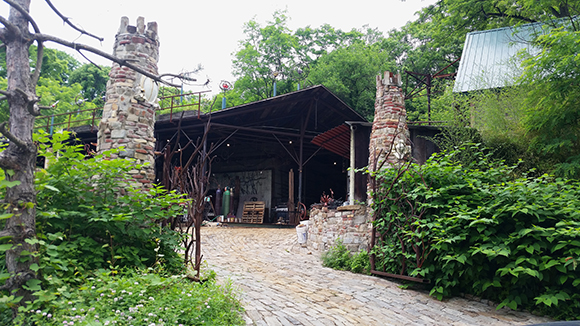 With help from his nephew, Bill Walter of Highland Park, Walter estimates that he will finish the logo within the week.

Walter learned his trade while he was a merchant marine, working on ships. He graduated from the United States Merchant Marine Academy in 1974. Back then Walter wasn’t sure what his career would be. But the Bethel Park native says he is happy working in his metal utopia.

“Just coming into work everyday is my favorite part of the job.”