It’s warming up today, but inside the Mt. Lebanon Recreation Center’s small ice rink last week, it was still December and snowing. “Love The Coopers,” a movie that’s being shot here, takes place all in one day and is a comedy with dramatic elements that chronicles one family’s return home to Pittsburgh for the holidays. Set to open in theaters this November, the movie has quite a few big name actors and actresses–Diane Keaton, Amanda Seyfried, and Olivia Wilde among others–but today’s actors are all children. The scene is a flashback to the characters’ childhoods.

Cait Murray, a Mt. Lebanon High School graduate and native is the location coordinator for the film. Her job is to work with the location department and handle logistics, paperwork and otherwise make sure communication is running smoothly among everyone. When the producers asked for a quaint, timeless and small ice rink, Mt. Lebanon’s rink quickly sprang to mind. Murray says she “used to skate there all the time on Fridays,” as a kid. The film company paid $1,160 to rent it for eight hours.

When there’s no obvious location, Jenn Manypenny, another South Hills resident, takes up the search by car. Given a description of what producers want, she spends up to 10 hours in her car, combing the Pittsburgh area for potential sets and locations. “I see amazing places every single day,” Manypenny says of her job. She loves Pittsburgh because it’s “a fantastic area and very diverse.” The variety of neighborhoods and looks within a relatively small area makes it a great place to film. 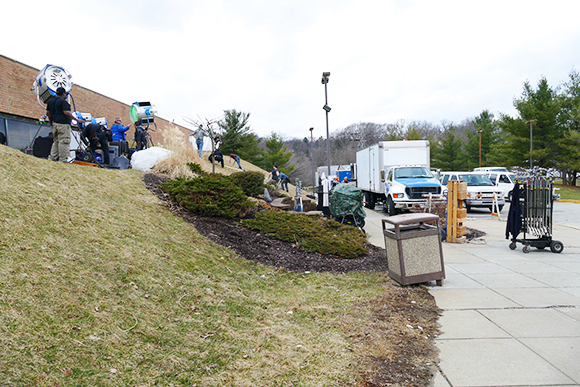 Mt. Lebanon’s ice rink is one of two Mt. Lebanon locations where filming took place; the crew also spent three days in The Galleria. Peter Silbermann, unit publicist for the film, says, “the location department is so important to how a film looks.” Working to bring the producer’s idea of a location into reality is not easy to do, he says. The location scouts, along with many of the technical staff and crew members are contracted from within Pittsburgh. Silbermann estimates that 70 percent of the people on scene today are staffed locally.

Outside the ice rink, parents circle, watching their kids act as extras in the movie scene. “On your mark” echoes through the rink, “rolling” say three people with headsets standing on different sides of the room, one after another. The camera rolls. A girl dressed in blue gracefully spins on the ice. A few hours later, the film crew packs up and everyone goes home after another successful day of filming. Once again, it’s March.

And thanks to Murray’s quick thinking, Mt. Lebanon residents will recognize a little slice of home when the movie comes to screen.