Flower tea is as beautiful as it is delicious.

On December 16, 1773, a group of American colonists threw tea into Boston Harbor to protest the tax policy of the British government. The colonists had had enough of the British and their favorite beverage. A mug of Joe was about to overtake a cup of Earl (Grey, that is).

According to The Economist, in 2011 American’s consumed 9.39 pounds of coffee per person and only .9 pounds of tea. Worldwide, however, tea holds the title of the most widely consumed beverage after water. But in the last few years, as tea’s healthy antioxidant properties have been hyped, Americans have begun re-embracing tea.

“Tea is now,” says Hillary Lohr, owner of Cammie Sin’s Tea Boutique on Castle Shannon Boulevard at Shady Drive East. Lohr, a Parkway Drive resident, opened her store in 2008. The store’s name is a play on the horticultural term for the tea plant, camellia sinensis.

“There are thousands of flavors possible because of the oils and additional ingredients that are used today,” Lohr says. “White chocolate mousse has little white chocolate chips in it; Earl Grey has bergamot. All tea companies have their own unique flavor profile.” Indeed, fruit flavors are familiar to most tea drinkers, but combinations like cinnamon-vanilla-sasparilla may be new. “People are realizing that tea is more than a bag you buy in the grocery store,” she adds.

At Cammie Sin’s, you can buy a variety of infusers and supplies as well as tea in traditional bags or loose in black, green, oolong and white. Lohr also sells rooibos (pronounced ROY-boss) and herbal teas, which are caffeine free and rich in flavor but contain no actual tea. Lohr notes that loose tea is superior to commercial tea bags, as the latter may contain cut leaves in thin bags, both of which can compromise flavor. “Tea can keep forever,” she says, “but the flavor is not quite as good after 18 months.”

While Cammie Sim’s focuses on flavors, Eden’s Market on Alfred Street looks more toward tea’s health benefits. Suzanne and Jeffrey Weiner opened this natural food store in June 2009.
“Any leaf can be made into a tea,” Suzanne says. “Each herb has a specific, different effect on the body…Valerian is calming, hawthorn berries lower blood pressure and rose hips are high in vitamin C.  They also just taste good.”  Eden’s also offers kombucha, a cold tea fermented with bacteria and yeast that’s high in probiotics. Long prized in parts of Asia and Russia, kombucha is highly astringent and definitely an acquired taste.

According to the Guayaki website, yerba mate (yer-bah mah-tay) has “the strength of coffee, the health benefits of tea and the euphoria of chocolate.” It comes from the leaves of the South American rainforest holly tree (Ilex paraguariens) and contains caffeine, theophylline and theobromine—well-known stimulants also found in tea, coffee and chocolate.  Unlike tea, however, it can steep for hours without becoming bitter and doesn’t cause jitters like coffee can. It is consumed hot or cold, and can be served with milk or honey.

Yerba mate is the national drink of Argentina, Paraguay, Uruguay and Southern Brazil, where it is more popular than coffees. The drink is traditionally served in a gourd and sipped through a bombilla, a straw that filters out the mate leaves. Sharing a gourdful is considered a symbol of hospitality. Yerba mate has begun to gain favor in the U.S., with many groceries now carrying it in bag and lose form and some restaurants, such as the Quiet Storm in the East End, now offering mate lattes.

If you frequent Thai or Asian restaurants, you may have encountered Thai iced tea, a highly spiced and sweetened concoction made of Ceylon or black tea. Spices can include star anise, cardamom, cinnamon and tamarind. The deep-red tea is poured over ice and then topped with milk—either condensed, evaporated, coconut or whole. The milk sits on the top, creating a lovely layered looked until you mix it. Delicious, but high in calories!

Finally, there is bubble or boba tea. Invented in Taiwan in the 1980s, it’s a sweet mix of tea, fruit and milk, but what makes this cold drink really unusual is the chewy tapioca balls (boba) at the bottom of the glass. The drink is served with a very wide straw, so you can suck up the flavorless boba, which have a gummy-bear consistency. Oddly, bubble does not refer to the tapioca balls, but the frothy foam formed on the top layer of the hand-shaken drink. Right now there’s only a handful of places serving bubble tea in Pittsburgh, including Rose Tea Cafe in Squirrel Hill, Lu Lu’s Noodles in Oakland and Yummy Yo & Boba Tea 88 on Library Road in Castle Shannon.

Lohr says that the afternoon English tea originated with Queen Victoria who wanted something to eat between lunch and dinner.  Traditional foods are usually served, often from a three tiered server: savories on top, scones next and desserts on the bottom.  The afternoon tea is not to be confused with “high tea”, so called because it is served at a high table in the kitchen; that tea is actually dinner.  Enjoy these cookies anytime.

BREWING THE PERFECT CUP OF TEA

There are almost as many ways to brew tea as there are people who brew it.  Well, not quite, but you get the idea.  Variables include the type of tea, how hot the water should be when it is added to the tea leaves, quantity of tea, steeping time, whether or not to warm the tea pot first.  Agreement is firm on two things: boil the water and allow plenty of room for the tea leaves to expand.  Whether or not you let the water cool to fit the tea type, as shown below, is a personal choice as are the quantity of leaves and steep time.

Iced tea:  Use half again as much tea.

Or let Hillary Lohr make it easy.  She says she always gets perfect results using 8 ounces of boiling water to a teaspoon of leaves, then letting the brew steep for 3 minutes before taking the leaves out.  She is not a fan of reusing the leaves.

THE WAY OF TEA 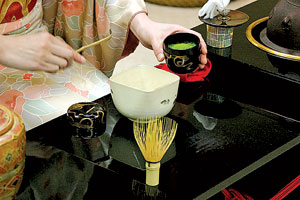 For most of us, preparing tea is a task that takes minutes—heat some water, dunk in the tea bag, drink. But in Japan, the tea ceremony is an art form requiring many types of equipment.

Tadao Arimoto, a Kyoto native now living on Pat Haven Drive, is a student of the way of tea. “The tea ceremony wasn’t perfected until the 16th century,” he says, adding that was centuries after Buddhist priests first brought tea to Japan.

According to Arimoto it takes at least 25 years to become a tea master. Everything about the ceremony is precise and prescribed. The tea master’s movements have to be perfect, effortless, never hurried. Watching Arimoto demonstrate a portion of the ceremony is like watching a ballet—a medley of carefully orchestrated movements, down to the smallest detail such as how the wrist is flexed. “Learning the tea ceremony is to repeat it until it’s second nature and you can shut out the world around you,” Arimoto says.

Only matcha, powdered green tea, is used. But the point is not to drink tea. The tea ceremony is a part of the Japanese culture, its aesthetic and artistic life, characterized by the term wabi-sabi, a Japanese concept recognizing the beauty of simplicity, the beauty of aging of things, the passing of time and, in turn, the smallness of our lives.

Several standard pieces of equipment are required for a tea ceremony, including a bamboo whisk, tea bowls, cold water container, hot water kettle, tea scoop, tea canister and ladle. Arimoto, a noted wood artist, has made lids for tea containers (chaire) and water containers (mizusashi), crafting many of the objects he uses in his tea ceremonies. He is currently involved in a “long term” project to create new tops for some antique water containers housed at the Freer Gallery of Art in Washington, D.C., which contains some of the most important holdings of Asian art in the world.  It’s not as easy as it sounds as handmade objects are not perfectly symmetrical. “Taking lids on and off is a part of the tea ceremony,” Arimoto says, “so they must fit perfectly.”