“You took your date where?!” teased Mt. Lebanon Police Cpl. Michael Smakosz to one of the teenagers clamoring to have a word with him before class. Since he had to assist with security during the fire drill during third period, he didn’t have as much time as usual to chat with the students before his presentation.

“They kept asking, ‘Where’s Officer Mike?’ They were so upset thinking you weren’t here today!” said Debbie Paravati, the business and information technology teacher at Mt. Lebanon High School who has been teaching the honors business law class, with the help of a Mt. Lebanon police officer, for nearly 20 years.

Honors business law is a college-level class open to sophomores and older, which introduces students to the basics of civil, criminal and contract law. Paravati designed the class so that future business majors will be prepared for similar courses after high school. “It’s the same exact theory they will need to know, with college-level exams, just at a slower pace,” says Paravati. “I can’t tell you how often my past students email me saying, ‘My college [business law] class is so easy! I’m sitting back. It’s amazing.’”

“The kids are completely in shock on the way home,” says Paravati. “This year, they actually got to talk to an inmate, who told them, ‘Be careful who you are hanging out with. You might not think you could end up here, but you could make a stupid choice. So just think before you do something that could bring you here.’”

Parvati’s relationship with the Mt. Lebanon Police Department is also an essential part of the lesson plan. When she first started teaching the class, her police partner was Blaise Larotonda, who is now the local district judge. She has worked with various officers since then, but Smakosz has been her partner for the past two years, presenting to her class on Fridays. Topics range from case law to self defense to underage drinking and DUI prevention.

“Smakosz is definitely an asset to the class. He’s a natural. He has that gift of communicating with the kids, and they open up really fast with him,” says Paravati, “He also has a wealth of knowledge of the Constitution, which really impresses them.”

The topic in class that day was police use of force. Smakosz employed slides, video clips and a relaxed, conversational atmosphere to engage the students.

“Have you ever noticed that it looks like Mt. Lebanon police are everywhere?” asked Smakosz.

“Yeah,” the class chimed in. One teen started laughing and elbowing his friend, who evidently has had cause to notice the local police presence.

“That’s on purpose, because a visible officer presence is the single most effective deterrent to crime there is. We don’t want people looking to do evil to come to our town at all,” said Smakosz.

Whispered sidebar conversations broke out, as the students digested this concept.

Later, after watching a video of a policeman using a Taser on a miscreant, a student raised his hand to ask about the incident this spring involving a naked male who jumped off the roof of the Bower Hill Community Church. At first the students were giggling about it, until Smakosz explained that the actor was likely in a state of “excited delirium,” either brought on by drugs or a mental breakdown, which causes body temperature to rise to a critical level and makes a person extremely dangerous.

“We encourage talking about real-world scenarios in this class,” Paravati says. “If there’s something that just happened in the news or in the courts, we talk about it here. I think at their age, a lot of times they think ‘the police are against us.’ [This class] breaks down the barriers. Then if [a student] is having an issue, they know they can go to him, because they have rapport.”

Smakosz and Officer Scott Kunz, who are both part of the crime prevention unit, started sharing the responsibilities of a school resource officer (SRO) at the high school in April, meaning that at least one of them is always present between 7:30 a.m. and 3:30 p.m. on school days. So after presenting to both of Paravati’s classes, Smakosz went on his patrol of the high school.

“In a typical day here, I usually walk more than eight miles and over 16,000 steps,” says Smakosz, checking his pedometer. “Today, for example, I just stood still and taught two classes, and I already have 2.1 miles and 4,288 steps.”

It’s something that may change for him in the fall, if the school district decides to fund a fulltime SRO at the high school for the 2018-19 school year. An SRO’s job is to work with the school district to better identify potential safety issues, in addition to ensuring quick responses to emergencies.

The school board approved the budget in May, which includes a placeholder of $65,000 for an additional position for school safety and security, but they still have to decide how that money would be best spent. “Obviously, I think having a fulltime SRO is a great idea,” says Smakosz. “Having a guy in the building would be critical in an active shooter situation, and unfortunately, this is the mass shooting generation … My daughter is a sophomore at Moon, and it makes me sick to my stomach with worry every day. We don’t live in a world anymore where we don’t have to worry about that.”

Regardless what the school board decides, Smakosz and Kunz will continue to have a presence around the district, since being in the crime prevention unit requires them to teach an average of 600 classes a year in Mt. Lebanon’s K-8 schools. For example, they teach Mt. Lebanon third graders about internet safety; fourth graders get a class on bullying and eight graders learn about safe dating. Smakosz and Kunz also teach classes at local churches, private schools and senior centers—all with the intention of informing citizens so that they do not become victims.

Until now, they haven’t had much involvement at the high school, other than Smakosz’s participation in honors business law and their temporary SRO duties, because scheduling regular presentations that reach the entire student body is more complicated there. However, they are working with high school principal Brian McFeeley and hope to institute some new classes, particularly around the dangers of distracted driving, in the years to come.

“Teaching is my favorite part of the day. The kids are so cool,” says Smakosz. “Did you see all the smiles in that class? How could you not be happy after that?”

“I’m passionate about giving information and keeping people safe,” he adds. “And I believe in the message that has always come from our chiefs here in Mt. Lebanon: ‘We don’t meet the standards, we set them.’ What we do here is the cutting edge, because it’s a great, unique town, and the town deserves it.” 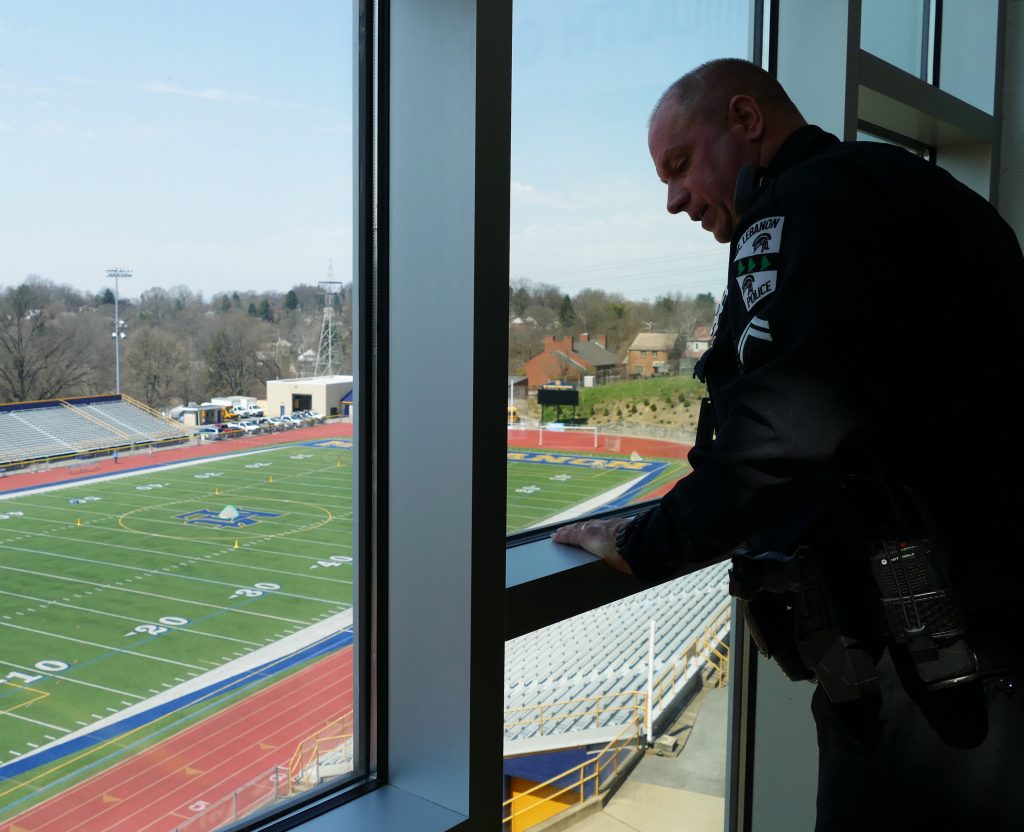