It’s a sunny afternoon, and 34 kids from all over the South Hills are playing soccer on the field behind Jefferson School. The pint-sized athletes, most of them sporting baby blue team T-shirts, travel up and down the grass and, one by one, look for their chance to make contact with the ball. Parents, sitting in pairs of collapsible lawn chairs, line the perimeter of the field and cheer on the players. They are equipped with water bottles, cell phone cameras and smiles almost as big as the ones their kids sport.

Mt. Lebanon resident Nancy Langer is one of these enthusiastic onlookers.

“He’s having a good time. It’s fun for him,” she says, watching her 11-year-old son, Martin, play soccer—a sight she wasn’t sure she’d ever see.

This is not your typical soccer club. This is TOPSoccer, a national outreach soccer program for children with physical and intellectual challenges.

Langer’s son Martin, a fifth-grader in The Life Skills Support Program at Washington School, has autism. She says TOPSoccer is an opportunity for Martin to “do stuff like typical kids.”

“Martin is not able to participate in traditional youth sports programs because he doesn’t have the attention span or the language and the social skills to do it,” she explains, barely taking her eyes of the field. “He seems to really like it [soccer].”

Martin isn’t alone. When asked to name his favorite part of the day, 10-year-old player Aidan Marple, who has autism (and loves The Beatles) proclaims: “It’s a tough question. It’s all so fun. It’s all awesome. My mom made a video of me doing it all!”

Locally, the TOPSoccer program got its start in 1996 when Bonnie Doran, a nurse and soccer mom, observed an energetic child with Down Syndrome in a supermarket. Determined to give children with special needs a physical outlet for their energy, Doran approached the Mt. Lebanon Soccer Association (MLSA) and with their sponsorship kicked off the inaugural Mt. Lebanon TOPSoccer season. In 2011, after a successful 15-year run, the program was put on hold when Doran retired and no other leader stepped forward.

Last fall, Mt. Lebanon’s Lynda Mallinger, whose son Danny, now 9, had enjoyed the program as a kindergartener, took it upon herself to restart Lebo TOPSoccer for kids ages 6 to 12.

“These are kids who don’t get so many opportunities to go out and play, certainly not in a group,” she says. “Many of them have been working so hard all their lives to achieve things that are pretty much a given for the vast majority of children.”

Every Sunday during a six-week long TOPSoccer session, the children whose disabilities include Autism, Down Syndrome, Cerebral Palsy and Spina Bifida, meet up to practice warm-ups and drills and play a brief but action-packed game. They end the hour with the much-loved “High Five Tunnel.”

Because many of the athletes have physical challenges, play is adapted for each child. Each player is assigned a volunteer “Soccer Buddy”—a high school-aged player who provides assistance on the field. 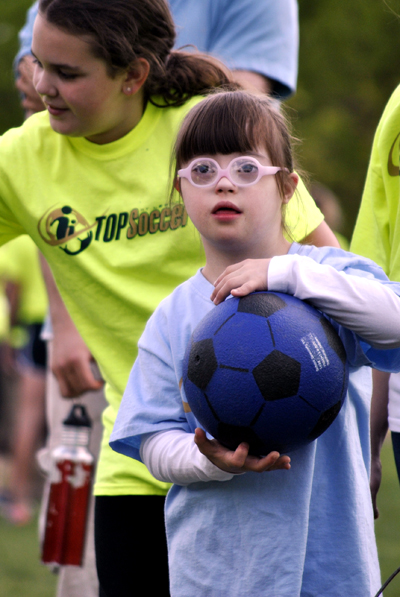 “He really wanted a buddy…If he does have a meltdown or something doesn’t go his way, she can talk to him about it, so he has somebody out there with him. It’s great,” Sharon Mohan says, pointing toward the field to her son Nicholas, 11, who at that moment scores a goal and then proceeds to celebrate in what can only be described as an uncanny imitation of David Beckham.

“He’s been watching videos of professional soccer players,” Mohan says, rolling her eyes and letting out a laugh.

Part coach and part friend, the buddies are tasked with teaching players the game, providing encouragement and ensuring fun. Seventy-two Mt. Lebanon High School students volunteered as buddies for TOPSoccer’s spring session. Among them were 17-year-old Amanda Riesmeier, who plays on the Mt. Lebanon girls varsity soccer team, and her sister Abby, 14.

According to their mom, Sharon, the girls volunteered to support their brother Drew, 10, a TOPSoccer participant who has Down Syndrome.

“It’s fun and rewarding for all of them,” she says. “The girls get a lot of out it, helping out the kids. And they know how to relate to the kids with special needs a little better than your average teenager.”

Three Personal Care Assistants (PCAs) from Washington School, Jill Warshaw, Paula Winn, and Anjelica Balkovec, also volunteer as buddies. A fourth Washington School PCA, Aja Weston, is one of three TOPSoccer coaches along with her husband Sean Weston and Jamie Linkowski, both of whom have previously coached MLSA teams.

“You would think that working with special needs kids all week, that they wouldn’t want to come out and do this on the weekends. But they do. And they’re great. And the kids adore them,” Mallinger says.

And so do many thankful TOPSoccer parents.

“The volunteers here are so helpful and kind and make all the kids feel good,” Nancy Langer says. “That sense of belonging is so important for these kids.” 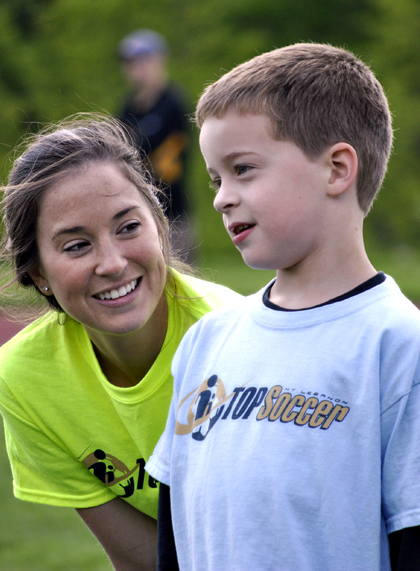 TOPSoccer is as much about developing confidence as it is about developing soccer skills. “These kids don’t get as many chances to shine,” Mallinger says. “There is a lot of intelligence, talent and love out there that may remain untapped, if they are not included and helped to feel good about themselves.”

This fall, TOPSoccer will expand to include teenage players. and organizers hope that the program can secure the use of a gym to conduct a winter session indoors. As long as there are players and volunteers, leaders say TOPSoccer will continue in Mt. Lebanon and will continue to focus on fun.

“The kids are definitely winners in my eyes,” Mallinger says. “My son, who scored three goals the first day, is a winner—and so is the little goal player who was too busy talking to her new buddy to even notice she’d been scored on! They work so hard to overcome obstacles and have so much to offer.”