An original Burton Morris artwork is one of many items up for bid in the Denis Theatre Foundation’s online auction fundraiser, www.denistheatre.org.

Support the Denis Theatre Foundation’s capital campaign by entering its online auction and bidding on one of many unique items, including the use of a stunning home in Pittsburgh for an event, autographed items, movies and a print of the original Denis Theatre capital campaign artwork by acclaimed international artist Burton Morris.

The auction opened November 28, Cyber Monday, and runs through December 9. To place a bid go to www.denistheatre.org and click on Events and Programs. More than 90 percent of the funds contributed will support the theater’s capital campaign.

On a Friday or Saturday night or on Valentine’s Day, you couldn’t get near a table at Iovino’s Café, 330A Beverly Road, without making reservations far in advance. But on a Wednesday night? The crowds weren’t as hungry. The Beverly Road restaurant’s reputation for delicious, high-end food made it a destination for folks both out of town and local, but they weren’t coming regularly enough in this difficult economy.

So this summer, after five years in business, owners Carol and Jeff Iovino morphed the high-end restaurant into a fun and hip bistro called Café IO. The menu is full of tasty burgers, crab cakes, pastas and pizza with a price range from about $8 to $25. The bar pours everything from wine and beer to cool seasonal drinks like a white chocolate martini.

“People think we’ve changed a lot when they come in the door, but really, it’s the small things that made a big impact,” Carol Iovino says. One change that has been a huge hit is the kids’ menu, featuring grilled cheese, chicken fingers and fried shrimp. That change has meant families can come in more often instead of just on those special occasions.

And speaking of family, Carol gives a nod to Jeff’s father, Rege Iovino, for helping to support the whole project, from financial investment to watching their kids when they worked on the new menu.

The hottest new menu item has been the fish tacos—crispy flounder with napa cabbage, red onions and a spiced aioli, served with lime and shiseido peppers. “It’s done just real simple,” she says.

A boost to the décor included chucking the white tablecloths in favor of cool blue toppers. An area by the door allows people to wait comfortably for the rest of their party. The bar area seats two and has room for four to stand.

The new location, with its proximity to schools and senior living centers, such as the Devonshire, will enable the center to offer a wider range of programs and services. Current programs at the center include Sunday School and worship; a senior dance group that meets on Tuesdays and a senior social group that meets on Thursdays; a boys basketball league, Bible studies, music programs and a food pantry. Programs and services are open to the public.  For information, call 412-207-2127. 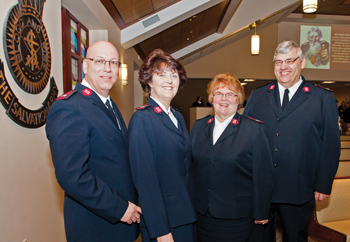 It’s about time we had something really fun—and local—to look forward to in the dead of winter. Mt. Lebanon’s Winterfest will be on Washington Road, Saturday, February 25, from noon to 5 p.m. The event’s theme is “Fire and Icing,” and will feature a chili cookoff (fire)—when area restaurants will compete for the tastiest bowl—and a cake contest (icing) that will pit bakers against each other.

The family friendly event will have a little something for everyone. Ice sculptures will keep you cool while beer will keep those 21 and over warm. Kids can get in on special games and activities at Clearview Common. And, best yet, while you’re having a good time, some of the activities will benefit the 2012 Relay for Life. Keep watching this magazine for details!