BURGER LOVERS, UNITE. Your utopia is coming to The Galleria this fall. Proprietors Rick Stern and Brian Pekarcik, owners of Spoon and Grit & Grace, are opening the latest of their three-restaurant BRGR concept in the space formerly occupied by Dragonfire, with opening set for October.

While the spot has been a revolving door of restaurant styles under different owners, including Asian, Mexican, pub, barbecue and other themes, Stern and Pekarcik’s BRGR concept has been highly successful ever since the pair opened the first one in East Liberty in 2010, adjacent to their hit Spoon restaurant.

The Mt. Lebanon location will be more like their Cranberry spot, a large, 6,000-square-foot, suburban location with a bulging menu and a staff of about 60. BRGR (pronounced bee-arr-gee-arr) features signature hamburgers made of a proprietary blend of sirloin, chuck, ribeye and strip steak custom mixed for BRGR by Curtze Food Service in Erie. To wash it down, BRGR has a full bar or a tempting menu of milkshakes, including “spiked” versions, such as the salted caramel (bourbon, caramel sauce, sea salt, vanilla bean).

For those not into beef, the restaurant offers burgers in other styles, such as salmon, turkey, bison, lamb and veggie versions. Stern’s favorite burger is the Fire in the Hole: beef with guacamole, jalapenos, pepper jack cheese, chipotle aioli and sriracha. Hungry for an app? He suggests the grilled cheese bites: provolone, applewood smoked bacon, truffle aioli, tomatoes, pickle chips on grilled Texas toast with a side of tomato fondue.

In addition to menu items, you can build your own burger by picking the meat, bun type, cheese and toppings, some of which are unusual (pastrami to spicy mango slaw.) There is a kids menu. The huge outdoor deck will be completely overhauled and the inside will receive a total renovation so it resembles none of its former incarnations.

Stern says they chose Mt. Lebanon because they already have a large customer base from here at their other locations, which also include PNC Park and a roving food truck. The burger trend is a national thing, but he is at a loss to explain it: “I don’t know. They just taste good. The price point is good. They’re just delicious.”

LITTLE BANGKOK Mt. Lebanon is getting its most oft-requested eatery, an authentic Thai restaurant. Little Bangkok, which has been a successful restaurant in the Strip District for the last three years, is opening a Mt. Lebanon location this fall, at 193 Castle Shannon Boulevard, in the spot formerly occupied by Mm! Mm! Pizza.

Co-owner Drew Kessler says the Castle Shannon Boulevard Little Bangkok will have the same menu as the flagship location, perhaps with some extra dishes for good measure. Because of its smaller size, the restaurant will be primarily takeout (with delivery under consideration). Scheduled to open in October or November, the spot will also have sidewalk dining at several tables, depending on how many Kessler can fit on the site. They will not have a liquor license, but you may BYOB.

You’ll be able to get your favorite Thai dishes, from Pad Thai to basil stir fry to curries, in addition to Little Bangkok’s signature dish: Pad Kra Pow, hand-minced chicken on a bed of rice with sunnyside up eggs. Like everything they make, you can alter the spice to your liking.
Little Bangkok will accept cash and credit cards and plans to be open for lunch and dinner, Tuesdays through Sunday, with final days and times to be determined. Party trays will be available. Kessler will employ three or four people.

The Mt. Lebanon location does not have a phone yet, but you can get a preview of what they will offer on their site: www.littlebangkokinthestrip.com. 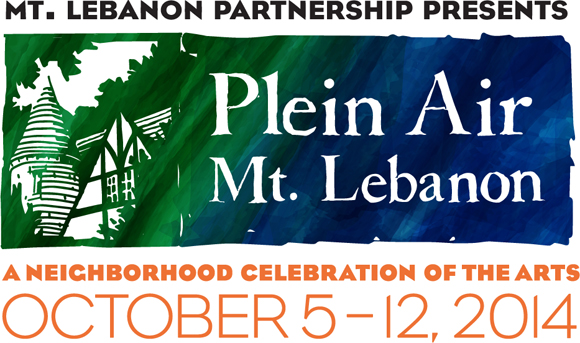 PLEIN AIR The thousands of people who experienced Plein Air Mt. Lebanon over the last two years have watched art created in the streets of our neighborhoods and business districts. Now, thanks to money raised at the events, four local artists will be able to continue their work. The Mt. Lebanon Partnership, the nonprofit group that presents Plein Air, has announced the winners of its Mt. Lebanon Arts Initiative. They will split a $3,000 pool of money.

Sandra Ward won the top award, $1,000, for a mixed media project that will involve students. The pencil, watercolors and photograph project will use superimposed images of family trees.

Chris Rohrbach received $984 for his Happy The Crab project, a story-telling combination of a silly line drawing meant to help families spend quality time together. His crab character adorns T-shirts and tote bags. His work was available at Earth Day in Mt. Lebanon and at the Mt. Lebanon Public Library.

Tenth grader Nora Vaughn won $280 to create a mixed media painting inspired by her recent church trip to Malawi, Africa. The work will be featured during Plein Air Mt. Lebanon this fall and probably will be on display at the municipal building.

11th grader Kathryn Mellett, who works after school at mtl, won $750 to purchase a sophisticated camera to film scenes from the Plein Air Artists Market, formerly Art in the Park but with an expanded focus. Her work will be shown during the Plein Air festivities, October 5 to 12.